Every single parent and student on the team are supporting the coach, who was placed on administrative leave without notice as to why, according to the coach. The district said the leave was 'non-disciplinary' action.

ISSAQUAH, Wash. - A movement is underway to get a basketball coach back on the court at Issaquah High School.

Coach Doug Crandall took the Issaquah High School’s girls basketball team to 4th in the state in 2020 and 3-0 this season before he was put on administrative leave with little explanation over a month ago.

Parents angered by the situation have raised thousands of dollars to fight the Issaquah School District in court, if they have to.

"I’m the most transparent person that’s out there. I have 100% trust in my integrity," Crandall said.

Crandall got emotional during FOX 13’s interview when he talked about the impact on the girls he has coached the last three years.

"I get emotional about this," Crandall said.

But the most painful part, he said, is not knowing exactly why he was put on leave. He’s begging for an investigation.

Parents involved with the team, not just some, but every single one, are supporting Crandall.

They are making T-shirts that say, ‘Free Doug’ and have raised more than $13,800 as of Tuesday afternoon for legal fees through GoFundMe. 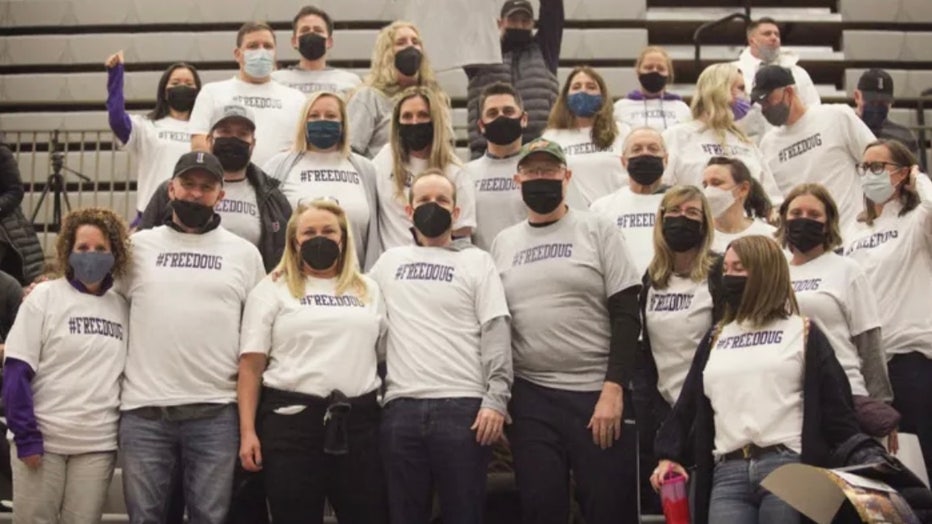 The parents are encouraging the coach to fight the district in court if he is not reinstated.

"If he was some average, normal coach, we wouldn’t be here-- I am going to be honest," parent Ken Sunderland said.

Sunderland’s 16-year-old daughter plays on Crandall’s team. He said Crandall is not only the best coach he’s come across, but the most honorable.

"Everyone is so upset and crying. We don’t know what’s going on," parent Ayana Meissner said.

Meissner said her 14-year-old daughter was in tears over the news.

Other girls on the team took their confusion and spoke up on behalf of Crandall during a recent school board meeting. One player said she was distraught and called the district’s handling of the situation "disappointing."

The district told FOX 13 in a statement that "Coach Crandall is on paid administrative leave pending an ongoing internal employment investigation" and that "The leave is non-disciplinary in nature and, while he is on leave, coaching duties are being handled by other staff, including coach Kathy Gibson."

Sunderland said there is no doubt in his mind that Crandall did anything wrong that would have warranted a leave.

"We are not going to let this go. I think the district is shocked we hadn’t let it go, but that is the whole point. That is how important he is," Sunderland said.

"Issaquah and Skyline High Schools, their basketball programs had 21 coaches in 10 years. The turnover is ridiculous," Meissner said.

For Crandall, this is now more than just about basketball.

"Now, it’s a fight for the transparency and accountability and what’s right," Crandall said.

Crandall said his contract is over in February and he believes the district is running out the clock.