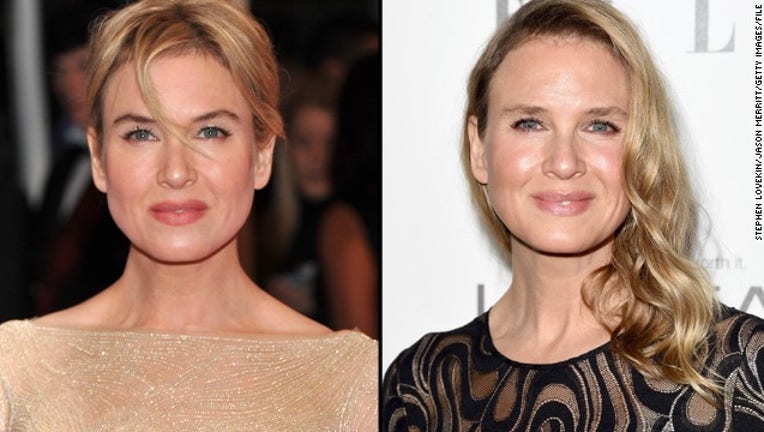 LOS ANGELES (CNN) -- The actress' new look on the red carpet Monday at the Elle Magazine 21st annual Women in Hollywood event had everyone doing double-takes.

Renee Zellweger looked so different from her "Jerry Maguire" and "Bridget Jones's Diary" days that some questioned whether it was really the same person.

Gawker simply posted present and past photos of Zellweger with a note that read, "Since a few people are asking, allow us to be explicit: These are 100 percent photos of Renée Zellweger (the one you are thinking of -- the famous actress), from Getty photos, correctly identified as Renée Zellweger. Other than that, there is nothing remarkable about them."

For some it was reminiscent of "Dirty Dancing" star Jennifer Grey, who a few years ago surprised fans with a new look. But in Grey's case, she said, it was a result of two plastic surgeries on her nose that left her appearance more changed than she had anticipated.

"I decided to make fun of this, to make my fiasco become my reality," Grey told The Washington Post in 1999. "After all, it's not cancer, and it's absurd that just a nose job could wreak such havoc."

Despite her new look, Zellweger probably doesn't have to worry about it interfering with her career.

While she hasn't been seen much since her last project in 2010, her latest film, "The Whole Truth," is due to hit theaters in 2015.