SULTAN, Wash.  – A neighborhood is scattered with debris and a Sultan family without a home tonight after their house exploded early Thursday morning.  Investigators say it was likely propane tanks stored inside the garage that caused the explosion.

The front of the Sultan house off Kessler Drive was blown off and now debris is scattered across the neighborhood. It started in the garage and just above the garage is where the two little boys, six and eleven years old, would have been sleeping.  Luckily, they weren’t home at the time.

“It mangled my car, it mangled the garage, it took the beams out of the garage,” said Sultan house explosion homeowner Sgt. Jack Bridenstine.

Army Sgt. Jack Bridenstine wasn’t home at the time, neither were his two young sons.  His fiancée was the only person home during the explosion and was woken up thanks to a fire alarm.  She narrowly escaped through the back of the house. 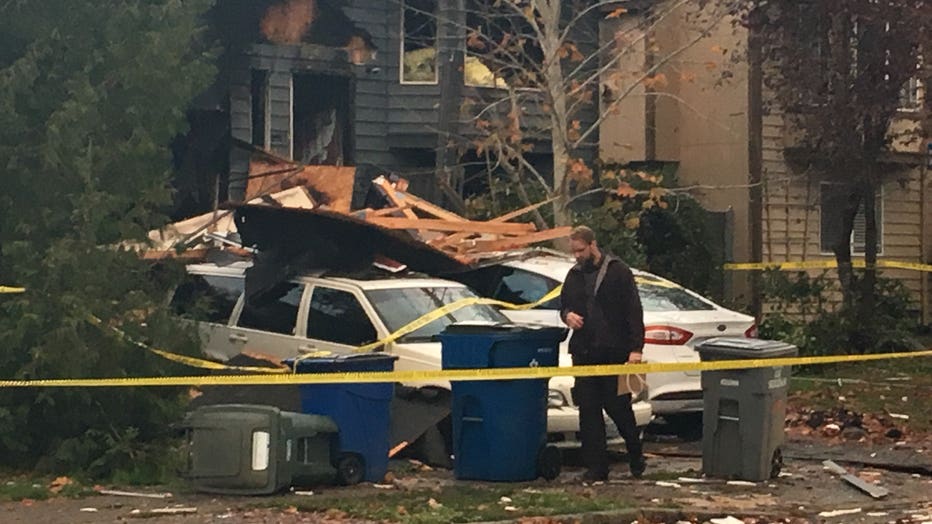 “The rest of it is just stuff, you know?” said Sgt. Bridenstine.  “I figure you make a joke about something and it kind of becomes less serious. I’ve been through worse, literally.”

Fighting in Iraq for our freedom prepared Bridenstine for anything that may come his way.

Crews continued to work hours after the flames were put out.  The initial explosion might’ve been caused by propane tanks left inside the garage.

“The gas is confined in that space.  What it does is that it builds up to a point where it finds an ignition source such as a pilot light for your hot water tank or your furnace. Once it reaches that, it explodes,” said Snohomish County Fire District 5 Deputy Fire Chief Jim Fulcher.

Puget Sound Energy spent the day checking gas lines which mean drilling under the sidewalk and digging up the ground and then patching everything back up again.

“The explosion threw the gas meter off the house and threw the wall out.  Then allowed open fame to just burn as a torch for about a half hour to 45 minutes. We didn’t want to put that out because it would be gas just floating out and that would cause a secondary explosion,” said Fulcher.

Bridenstine’s home is a total loss.  Fire officials warn the home will fall down so they put up a fence to keep people back and away from falling debris.  The house just next door suffered $100,000 to $200,000 worth of damage after flames spread through its roof.