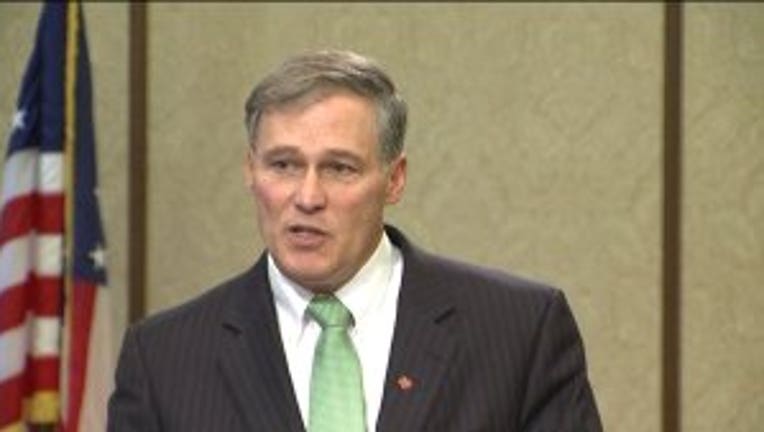 OLYMPIA -- Gov. Jay Inslee pledged Wednesday to correct whatever it was that went wrong at the Washington State Department of Transportation that led to the costly State Route 520 Bridge pontoon cracks – a mistake that could cost as much as $100 million.

“I’m grossly disappointed that the protocols of the Department of Transportation that should have been followed were not followed,” Inslee said about the lack of adequate testing at the design stage. “I don’t believe there is a legitimate excuse for that not having been done.”

An independent report lays the blame on WSDOT engineers, not outside contractors.

The governor promised that the people responsible will be held accountable.

“There will be letters that will be going out shortly to some of the Department of Transportation employees,” Inslee said. “Appropriate discipline will be decided after their due process rights are respected.”

Republican legislative leaders took aim at the WSDOT and what they argue is a history of mismanagement.

“We are seeing time and time and time again where through WSDOT we’ve got big problems,” said state Rep. Dan Kristiansen, chairman of the House Republican Caucus and a former contractor. “Were we up to it?” he asked.  “When you are dealing with massive projects that carry certain levels of liability, let’s make sure we have the right people for the job.”

Just last week, Democrats unveiled a $10 billion package to help with transportation projects across the state.  The centerpiece is a 10-cent increase in the gas tax. Republicans said these latest pontoon problems means their support for that plan will be hard to secure.

“Until we have some kind of confidence around DOT’s ability to do the project correctly, then I don’t think we can continue to keep throwing good money after bad,” said state Rep. Richard DeBolt, R-Chehalis.

But Inslee maintains this is still the year to pass a transportation package.

“I’m not going to allow these cracks to be a crack in our confidence moving forward,” he said. “We’re going to fix these problems.”

The transportation plan, including the gas tax hike, would need two-thirds of the Legislature to pass – or a simple majority to send it to voters this November.

The state Supreme Court said it may issue a ruling Thursday on a challenge to the state’s two-thirds rule to pass tax measures. The suit, brought by the League of Education Voters, assets that the state constitution says that bills require a majority vote only in both houses of the Legislature to become law.