Gov. Jay Inslee on Tuesday announced several climate related proposals for the next legislative session, including fully reinstating a plan to cap carbon pollution in the state.

OLYMPIA, Wash. - Washington Gov. Jay Inslee on Tuesday announced several climate-related proposals for the next legislative session, including fully reinstating a plan to cap carbon pollution in the state.

In January, the state Supreme Court ruled that the state’s Clean Air Rule cannot apply to companies that sell or distribute petroleum or natural gas because they don’t make their own emissions — other people burn the fuel they provide. The Department of Ecology only has the authority to regulate “actual emitters,” like refineries, power plants, factories, and other big polluters. But about three-quarters of the emissions that would have been covered by the rule came indirectly from petroleum and natural gas importers and sellers.

Under his plan, announced as part of a weeklong budget rollout, his budget would include $12.6 million to implement a bill called the “Climate Commitment Act.” In addition to the cap on greenhouse gas emissions, the bill would authorize the state Department of Ecology to implement a program for industries to comply through the sale, tracking and accounting of greenhouse gas credits. Proceeds from those will go toward funding projects focused on transportation and clean energy.

Inslee is also seeking a measure that would require fuel producers and importers to reduce greenhouse gas emissions associated with gasoline and other transportation fuels. That effort, which has previously stalled in the Legislature, would create a clean fuels program similar to ones in British Columbia, California, and Oregon. It would require fuel producers to reduce the carbon emissions associated with their products by 10 percent by 2028 and 20 percent by 2035. 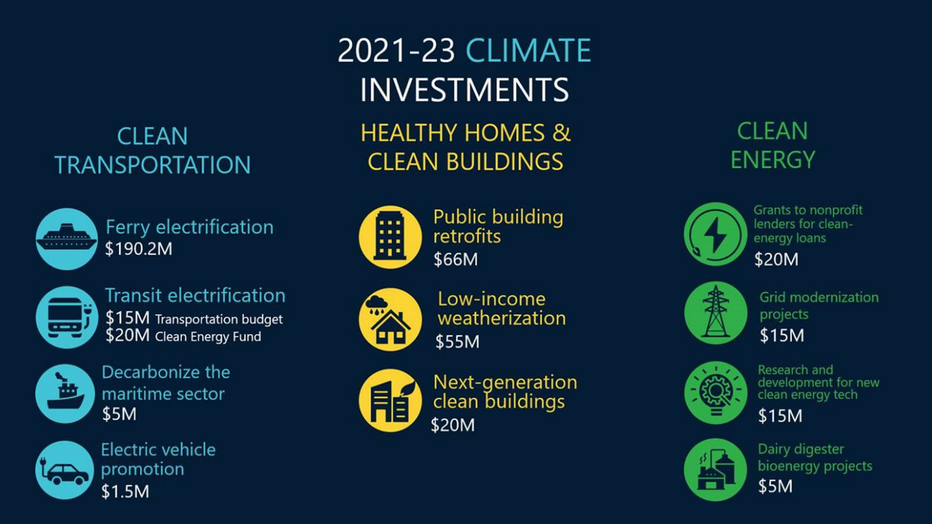 The plan also expands the effort to transition the state’s 21-vessel ferry system from diesel to electric. Last year, one vessel was converted to electric. A second conversion has already been authorized, and the funding is also in place for construction of a new 144-car vessel. Inslee’s plan for the next two year budget would fund that second conversion, as well as construction of a second new electric ferry and funding to build three charging stations. The cost over the four years would be $318 million, with about $190 million being spent in the next two-year budget cycle.

Inslee’s climate proposal also looks to do the following:

—Allocate $3.25 million to coordinate with Oregon and British Columbia on an ultra-high-speed rail corridor.

—Require new buildings to be zero-carbon by 2030, with a goal to eliminate fossil fuels from existing buildings by 2050. He also allocates $55 million to weatherize and support energy efficiency investments for 7,000 low-income homes; $66 million to retrofit more than 200 public buildings; and $20 million to shift from fossil fuels like gas to high-efficiency electric heat pumps and other electric equipment.

— A focus on communities most impacted by climate change, including the creation of a permanent environmental justice and equity advisory panel.

Inslee, who was elected to a third term last month, is releasing his state budget this week in several stages ahead of the legislative session. The Democratic-controlled House and Senate will each present their own budget proposals during the 105-day legislative session that begins Jan. 11.

After the Legislature failed to adopt a cap-and-trade program, Inslee directed Ecology in 2015 to use authority under the 1967 Clean Air Act to limit carbon emissions from Washington’s largest sources. He called climate change a threat to the state and said the new regulations would help Washington meet its requirements to reduce carbon emissions.

Inslee has long touted environmental issues and made climate change the core issue of his fleeting presidential campaign last year.