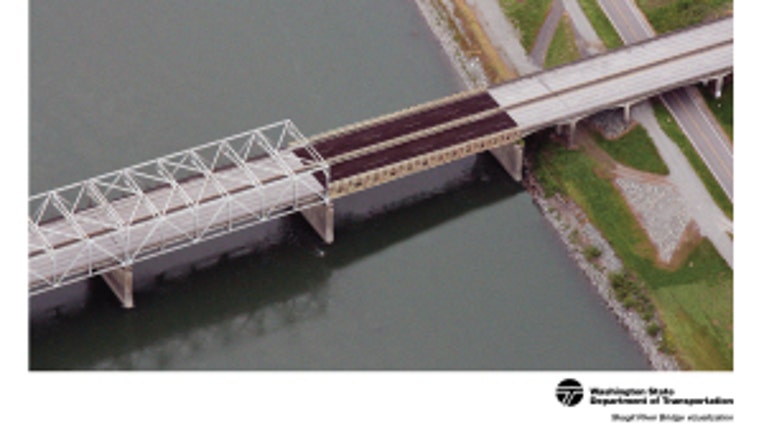 This is a design visualization of what the temporary bridge may look like. (WSDOT)

MOUNT VERNON, Wash. – Gov. Jay Inslee announced a plan Sunday to replace the collapsed portion of the Interstate 5 bridge over the Skagit River with a temporary four-lane span until a permanent replacement is built and opened to traffic.

“We will install a temporary span on the bridge that will restore traffic while we build a safe and durable permanent span adjacent to it,” Inslee said. “This plan ensures the economic vitality of Washington state and the communities along this important corridor.”

The temporary span could be place within three weeks, by mid-June, Inslee said.

The temporary four-lane bridge will carry I-5 traffic over the Skagit River at a reduced speed and capacity, Inslee said.  The bridge will consist of two, 24-foot wide structures to replace the collapsed section of the bridge. These structures will be pre-built and trucked to the site to allow for accelerated installation.

The remaining southern section has been examined and will not need to be replaced, he added.

“The plan minimizes the closure time and keeps clear access to popular Skagit County retail business and destinations, including the Anacortes ferry terminal,” said Inslee. “I’m proud of all the work done by the Department of Transportation and all our local and federal partners that resulted in this innovative plan.”

If the remaining inspections of the bridge structure find no additional damage, the temporary bridge could be in place within three weeks, officials said.

Once debris has been removed, further underwater structural examinations will determine if additional repairs are needed before installing the temporary span.

Crews will immediately start work on the permanent bridge when the temporary span is put in place, Inslee said.

Crews will put temporary piers into the river to support a platform adjacent to the collapsed span, where the new section will be built. Once complete, the temporary span will be removed and the new permanent span will be moved into place.

The Washington State Department of Transportation hopes to have the permanent bridge open to traffic in early fall.

State Transportation Secretary Lynn Peterson said that although the short-term fix will bring some relief to drivers and the community, the final resolution is still months away.

“We ask for everyone’s patience as we transition from emergency operations to long-term repair,” Peterson said.

Reduced speeds during the interim fix mean traffic backups will continue to be a challenge, both locally and on I-5. Drivers should still allow extra time when traveling through the area. The detours will remain in place to provide drivers with travel options.

“The home stretch will be a two-week total closure of I-5, likely in September, as crews remove the temporary structure and move the permanent bridge into place,” Peterson said.

A portion of a bridge on I-5 collapsed into the Skagit River near Mount Vernon Thursday night after a tractor-trailer carrying an overload struck critical steel supports.

This vital corridor, between Seattle and Vancouver, B.C., carries 71,000 vehicles each day and is the only north-south interstate in Washington state.