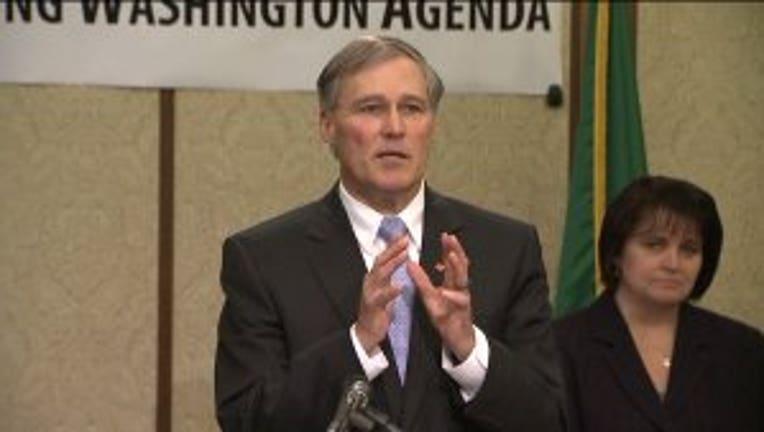 He said it will put a big dent in the state’s persistent unemployment rate, which stands at 7.6%.

Estimates are that 300,000 state residents are looking for work.

Inslee’s plan focuses on giving help to certain sectors of the economy, including tax breaks he argues will trigger hiring.

“If you look at the power of job creation, which is associated with these industries, in aerospace, software, life sciences, military, agriculture, I know we can do a lot better,” he said. “These action items that I have suggested are proved tools for doing it.”

Inslee’s plan calls for adding money to better train workers at both the K-12 and higher education level.  He would also boost support for tourism, the state’s fourth largest industry.

The governor said his $120 million package can be more than paid for by the $144 million savings he said the state will reap through the implementation of ‘Obamacare.'

“I am sort of very cautious of creating some sort of false expectation,” he said. “I’m not going to solve the collapse of Wall Street just with my plan here today. It’s going to be a long, continuing process.”

Inslee also gave his support Wednesday to the effort to create a multibillion-dollar transportation package, which legislators are working on now.  It’s likely to include an increase in the gas tax and more tolling. The governor said it, too ,will help the state’s employment picture as well.

“We’re building bridges and tunnels and everything else with no money to finish them,” he said.

Republicans were cautiously supportive of the governor’s plan.

“We’d rather find the common ground rather than areas to fight over,” said state Sen. Mark Schoesler, R-Ritzville.  However, they argued that a much better way to encourage job growth is to ease the regulations on business and on development.

“There are small counties with persistent unemployment, like Mason County, Cowlitz County, that have an opportunity to grow because the Growth Management Act (which requires state and local governments to manage the state’s growth by identifying and protecting critical areas and natural resource lands) is hampering that,” said state House Republican leader Richard DeBolt of Chehalis.

The governor said he’s going to work closely with Republicans and find as much common ground as possible on his jobs bill package.