OLYMPIA, Wash. -- Gov. Jay Inslee extended Washington's stay-at-home order through May 31 and revealed a 4-phase plan to reopening the state.

Inslee made the announcements during a press conference Friday afternoon in Olympia.

"I would like to tell you that you can make reservations for June 1, but I can’t," Inslee said. "We will have to monitor, assess and adapt."

"On Monday I will issue a new extension of our 'Stay Home, Stay Healthy' order that will allow us to take some initial and immediate steps for reopening. We are turning the dial," he said. "In addition, smaller counties not hit hard by COVID-19 will be able to apply to the Department of Health for a variance from my order that will allow for more quickly moving to each next phase." 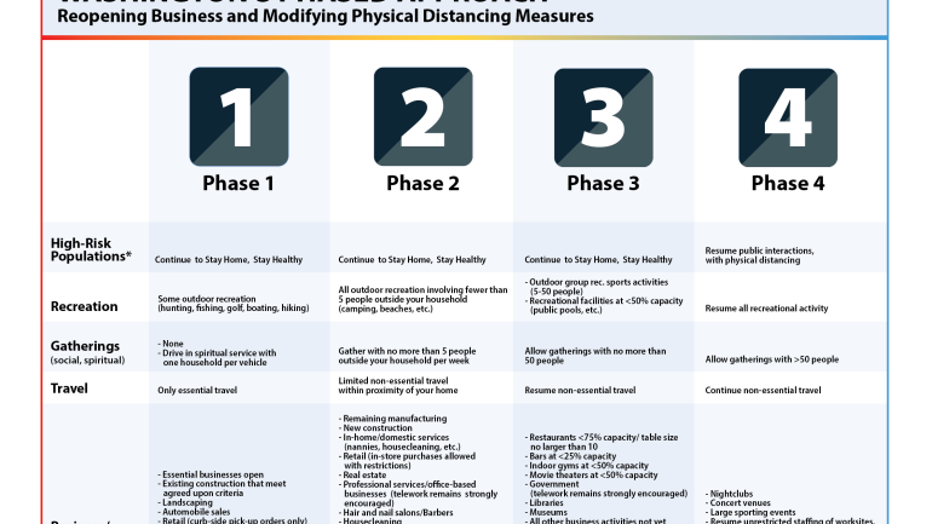 Washington's 4-phase plan to reopening the state was released May 1 by Gov. Jay Inslee.

The governor said there will be at least three weeks in between each phase to monitor effects. Ten counties are eligible to apply to the Department of Health for more rapid reopening based on low case numbers, deaths, and having enough PPE (personal protective equipment) and medical capacity.

According to the governor's office, the ten counties are:

Since last Friday, Inslee has announced the easing of some restrictions, including the resumption of existing construction projects and allowing day use activities at state parks and some outdoor recreation like hunting, golfing and fishing to start next Tuesday. Earlier this week, he said some non-urgent surgeries could also resume. The Democrat said the first phase implemented this month would also allow drive-in spiritual services with one household per vehicle.

The next phase would allow camping, and new construction, as well as in-store retail purchases with restrictions. Barber shops and salons could also reopen at that time, and restaurants could reopen at half capacity and table sizes limited to five.

The third phase would expand group gatherings to 50 or less, including sports activities and would allow restaurants to increase capacity to 75 percent. Gyms and movie theaters could reopen at half capacity, but nightclubs and entertainment venues will still remain closed during this phase.

During the last phase, most public interactions would resume, with social distancing, with bars, restaurants and entertainment and sporting venues returning to their maximum capacity.

Inslee has said several elements have been at play in his decision making, and that all of them need to see reduced risk: disease activity, health care system readiness, testing capacity and availability, an increase in case and contact investigations once a case is confirmed and risk to vulnerable populations, like those in assisted living facilities.

He said while there is continuing evidence that the spread of COVID-19 has been suppressed he urged caution to moving to lift restrictions too quickly, and said officials will look at how the state is faring after each phase, and said the three week suggestion is a minimum. Inslee said that cities and jurisdictions can take more strict action that what is mandated under the state order based on public health needs in their individual areas.

“I have said that our return to normal will still not look the way they did before this virus hit us until we have pharmaceutical interventions such as a vaccine,” Inslee said. “No one knows when that is going to happen.”

Also Friday, initative promoter and GOP gubernatorial candidate Tim Eyman joined Franklin County Commissioner Clint Didier and others in filing a federal lawsuit against Inslee, claiming that his stay-at-home order amounted to “unacceptable tyranny.” The governor’s office said it was reviewing the case. Inslee’s actions appear to fall within the emergency powers delegated to him by the Legislature. The Seattle Times reports that the lawsuit is the second legal challenge Inslee is facing by a Republican politician. Joshua Freed, a Republican candidate for governor, sued Inslee last month in federal court, alleging the stay-home order’s inclusion of a ban on religious gatherings violates the First Amendment.

In a statement, Sen. Mark Schoesler, the Republican minority leader, criticized the governor’s plan, saying that more businesses could follow the steps grocery stores have taken to reopen their doors quickly, writing that many employers are being forced “to remain on a path that could easily end in their failure.”

Inslee acknowledged the frustrations he’s heard, but said that most Washingtonians “understand that if we stick together for a while longer we won’t lose all the gains that we’ve already made.”

Washington state saw the nation’s first confirmed COVID-19 case in January, as well as the first deadly cluster, at a Seattle-area nursing home. Inslee in March was among the first governors to order sweeping social distancing restrictions.

More than 14,300 people in Washington state have tested positive for the virus, which causes mild to moderate symptoms in most patients, and at least 814 people have died. While the vast majority recover, the coronavirus is highly contagious and can be spread by those who appear healthy and can cause severe illness and death in some patients, particularly the elderly and those with underlying health conditions.

Washington Gov. Jay Inslee and state schools Superintendent Chris Reykdal announced April 6 that due to the coronavirus outbreak schools would remain physically closed for the remainder of the school year and that the state’s more than 1.2 million public and private K-12 students will continue distance learning until the end of June.

Schools have been shut statewide since March 17, and were originally scheduled to reopen April 27. Now, that closure is extended until midnight June 19 — when the spring term ends — and schools are encouraged to continue to provide distance learning.

Colorado and Nevada joined Washington, Oregon, and California in the Western States Pact -- a working group of Western state governors with a shared vision for lifting stay-home orders safely amid the coronavirus pandemic.

"In Washington state, our decisions are guided by public health data and science and this is a principle we share up and down the West Coast. (Colorado and Nevada) are taking that approach as well, and the addition of their states will strengthen this regional partnership and save lives," Inslee said.

Some local leaders across the state have expressed opposition to a “one-size-fits-all” approach to reopening Washington, hoping to be given more control over the economic fate of their residents.

“Our economy over here in Eastern Washington, especially here in Spokane County, is far different than the west side,” Spokane Mayor Nadine Woodward said in an appearance Sunday on “The Divide.” “We don’t have the Amazons, or the Microsofts or the Boeings that boost the economy.”

Woodward said leaders in Spokane County are working toward a regional approach to opening back up the economy, concerned about tourism and hospitality sectors that are especially vulnerable should mandated closures be extended into the summer months.

“Those industries have been decimated,” she said. “Half of the people who work in those industries work paycheck-to-paycheck. They have not seen three paychecks now in the last six weeks. We’re hurting. We’re struggling in a way over here that I don’t think Western Washington is and probably doesn’t understand.”

Despite the desire to move forward on an expedited timeline, Mayor Woodward said she would not do so without the governor’s stamp of approval.

“We understand that the governor has the authority to make these decisions and quite frankly, I don’t want to act outside that authority.”

State Health Officer Dr. Kathy Lofy previously expressed opposition to allowing regional reopenings. Lofy said in an April 21 conference call with reporters she was concerned that relaxing social distancing mandates in certain parts of the state would lead to increased spread of the virus.

“Are those folks going to be traveling around the state, infecting people from other communities and then starting up outbreaks again? That’s one of my concerns from the public health perspective,” she said.

Meanwhile, in Western Washington, some mayors have been left feeling powerless as mandates come down from Olympia.

Marysville Mayor Jon Nehring, who was among those that signed the letter, said Sunday on “The Divide” that he does not wish to second-guess the governor’s approach, but does believe it’s time to detail a path forward.

“I think by and large the measures taken in Washington state have proven to be a pretty good success story,” he said. “We’ve bent the curve a little bit. We’re in many ways looked at nationally as a success in how to handle this. So I think that has to be acknowledged.”

“I would hope that as we get to May 4, we can at least begin the process of looking at some areas where we can maybe loosen some of the restrictions and reopen the economy a little bit.”