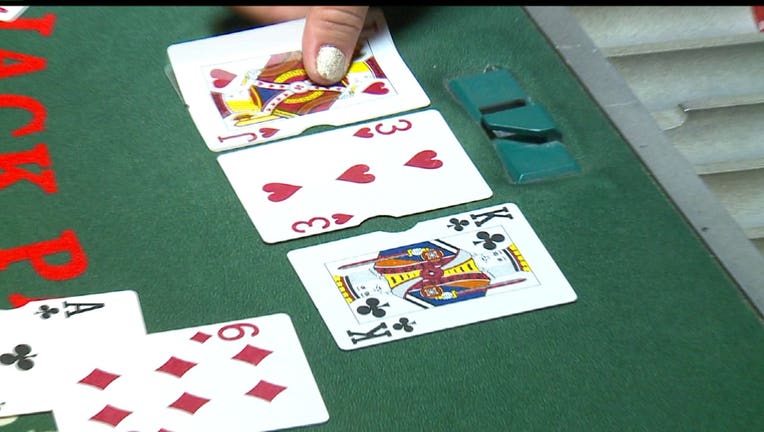 SEATTLE -- “Surveillance is a very clandestine department. We don’t like to go on the gaming floor, we don’t like people to know who we are, so we kind of stay behind the scenes,” explains Martin Hughs, surveillance assistant director for Emerald Queen Casino, one of the most profitable casinos in America.

“Anytime there is anything to do with money or risk management, the casino will have a camera there," Hughs said. "We’ll be able to watch you, see what you’re doing.”

Federal and state law prohibits our cameras from going inside the surveillance room, but the “eye in the sky” is well-known, thanks to Hollywood films and television shows.

Everyone working at a casino must be well-trained, and that starts with the dealers.

Richard Soderberg, who owns Ace In The Hole casino training school in Seattle, says, “When I start to teach the dealers the game, I start with their peripheral vision. If they stand at the table and look straight ahead, I can see both of my hands moving, if I’m looking at the person in the middle.

"But if this player calls me a name on my left and I look over there, I can’t see these two players in these spots.”

Soderberg says minimizing cheating takes a dealer constantly playing defense, explaining, “When you go to the casino, sometimes you see the dealer doing that. Well, if they want, they can probably show the player here this card if they went like that. It exposes that under card.”

And that could lend itself to the most common form of cheating known as "advantage playing.”

“Advantage players are people like, with blackjack, you have card counting. There comes a point with money management, an account gets a certain way, that you can actually swing the blackjack advantage in your favor and not the house’s favor,” says George Robinson, Emerald Queen Casino manager.

Although counting cards is an enemy of casinos, it isn’t illegal. It’s one of hundreds of tactics people try to take the gamble out of gaming.

Still, dealers have their tricks of the trade on what to look out for. Soderberg points to the ends of the poker table and says, “A player on this side or this side, these are the two most vulnerable spots on the table.” Those seats can be blind spots for a dealer who isn’t standing in just the right place, allowing a player to steal a chip or secretly add to their bets.

Technology is also playing a bigger role in catching those who don’t want to leave their winnings up to fate.

Robinson adds, “High-definition cameras and color cameras make it so much easier for the surveillance video people to see things, and that technology is changing fast. There’s stuff out there now like facial recognition stuff where they can take a snapshot of everyone who walks through the door, and then run it through database of known cheats and you’ll know when someone walks through the door.”

It’s just one more hand casinos have to play against cheaters, even if it doesn’t always guarantee a win.

“Like everything else, cheating evolves. Once you find out how to do one thing, the cheats figure out how to do another. So you keep on learning on a daily basis,” Hughs added.