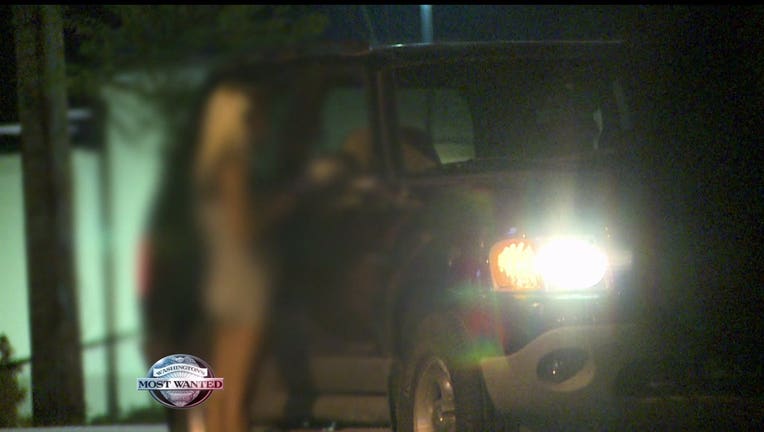 Every girl has her own story.  Washington's Most Wanted's Dana Rebik says for one young woman from West Seattle, it started when she was 18 years-old. “I was so broken already from my past that I just wanted somebody to care about me and love me,” she said.  “I was in a night club and I was approached romantically.  It started out as a boyfriend girlfriend relationship but it was just him grooming me.” A few weeks in, she couldn't pay her rent.  That’s when her new 'boyfriend' made a proposition. “He said ‘Well if you need money I’ll pay your rent but this is what we’re going to do’.  He explained to me that I was going to be walking.” That meant walking up and down Highway 99.  Eventually, the gang member and pimp had her working out of local hotels, selling her for sex. “On a bad day I was making between $2,000 to $3,000 and on a good day I could make upwards of $6,000 to $7,000.” “And how much of that would you keep?” asked WMW's Dana Rebik. “None,” she said.  “I wasn’t even allowed to buy food.” It was sometimes terrifying, like the time she was drugged by a 'John'. “I ended up naked on the side of the road and went to Harborview and he (pimp) didn’t care.  He didn’t care to come up there to make sure I was OK.  All he cared about was when I was going to be ready to go back out and make money.” Finally, she tried to quit and things got even worse. “When I told him I don't want to do this anymore that was the first time I got beat up.  He never slapped, he always punched with a closed fist.  He pretty much beat me like I was a grown man.” She ran away, but the pimp always found her.  Finally, she was rescued in an undercover sting and her pimp got 17 years behind bars. For 21 year-old Brianna, another victim of sex trafficking, things happened a little differently. “He said ‘You’re too pretty for this small town’.  He made it seem like it was this glamorous life he was living and why shouldn’t I be a part of it,” said Brianna. The straight-A student from outside Vancouver, Washington met a guy at the diner where she worked.  Over time, he convinced her to move to Seattle where she hoped to go to nursing school. “He wanted me to start stripping and lying about my income saying I was a waitress to my family,” said Brianna. Within days, the man told her they were going on vacation to Phoenix.  Little did she know, he had sold her to a pimp there for $50,000. “They would move her into place in Arizona and she would be managed by someone else,” said former Congresswoman Linda Smith. Smith is the founder of Shared Hope International, an organization dedicated to finding and helping victims of human trafficking. “The thing that was constant is we were finding ordinary 11-14 year old kids.  My average age is 13 where I find them and this is throughout the United States,” said Smith. Shared Hope has produced a documentary called ‘Chosen’, which shows how quickly girls can be lost to these predators. “One teen was being sold for $10,000 a weekend as a pretty woman for the fantasies of older guys with younger girls,” said Smith. Smith’s goal is to educate and show teens what they’re up against and who to stay away from. “We’re teaching young girls and young women to see the monster and the deception behind those charming eyes and those smooth talking lies,” said Brianna. Because as these young women know, the sex trafficking trade is a never ending cycle. “The search for a new girl never ends.  It’s a constant thing.  That’s their job every day to go find new girls,” said Brianna. This is why these women chose to take part in this project and share their stories, so other young women don’t fall into the same trap. “It is not worth it.  You will not see a dime of the money made.  You’re not going to have the fancy clothes.  You’re going to have less than what you started with.” CLICK HERE for more information on Shared Hope International and the new film,"Chosen".