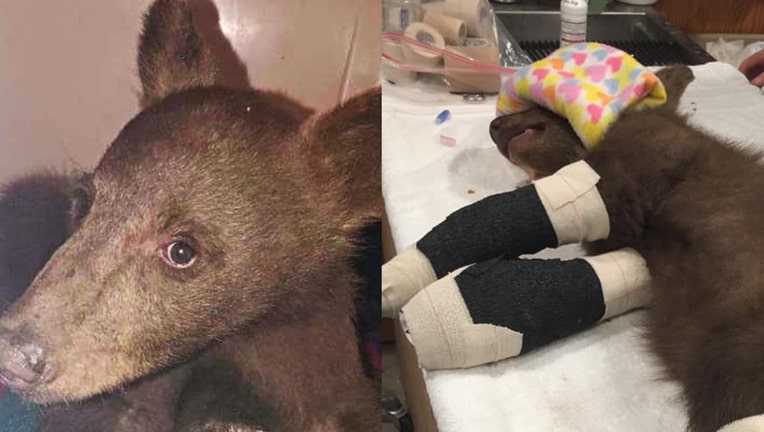 The cub was burned in the Tamarack Fire, which started on July 4 as a result of a lightning bolt and has been raging since as firefighters work to contain its spread, south of Lake Tahoe.

"We found the cub — sedated it  — (tried to run down the hill in the pitch black dark but we found him) & headed back to LTWC," the wildlife nonprofit dedicated to rescuing, rehabilitating and releasing injured animals said in a Monday Facebook post.

The 21-pound male cub named "Tamarack" had burns on all four paws, so LTWC officials gave him "pain meds," fluids and treated his injuries.

Videos posted to LTWC's Facebook page since Monday show the cub walking around with bandages wrapped around his paws.

"Tamarack is stable & resting! We have made him as comfortable as possible!" LTWC said in a Monday evening update. "He must be so scared & even with pain meds and treatment he must be in pain, but we are so grateful to be able to keep him safe & give him a second chance at life!"

The mother bear could not be located, according to a social media post from the Alpine County Unified Command, which was called to the rescue scene on Sunday.

"We are lucky to have organizations like [LTWC] that work selflessly to rehabilitate injured wildlife in our region," JT Chevallier, Alpine County public information officer, said in a press release. "We are grateful for their quick and effective response to the situation. We are hopeful for a full and speedy recovery for ‘Tamarack,' our four-legged Alpine County resident."

The Tamarack Fire covers more than 68,000 acres, and 54% of the fire has been contained as of Tuesday, according to the U.S. Forest Service.