SEATTLE -- The Seattle Police Department was criticized Tuesday in an independent review of its actions during last year's May Day violence. The report said police planning was lacking and officers on the street were confused over who was in charge or what force to use.

"From approximately 1200 hours (noon) until the mayor signed the Emergency Proclamation at 1500 horus (3 p.m.), the violence continued in the Downtown Core," the report said. "It was during this time Seattle Police Department was unsuccessful in stopping the violent destruction of property.

"Unfortunately," it said, "the aforementioned three-hour period was not a shining example of successful crowd management and protection of property ... SPD personnel described the incident as running itself with self-deployment of supervisors and officers taking independent action with little coordinated direction." 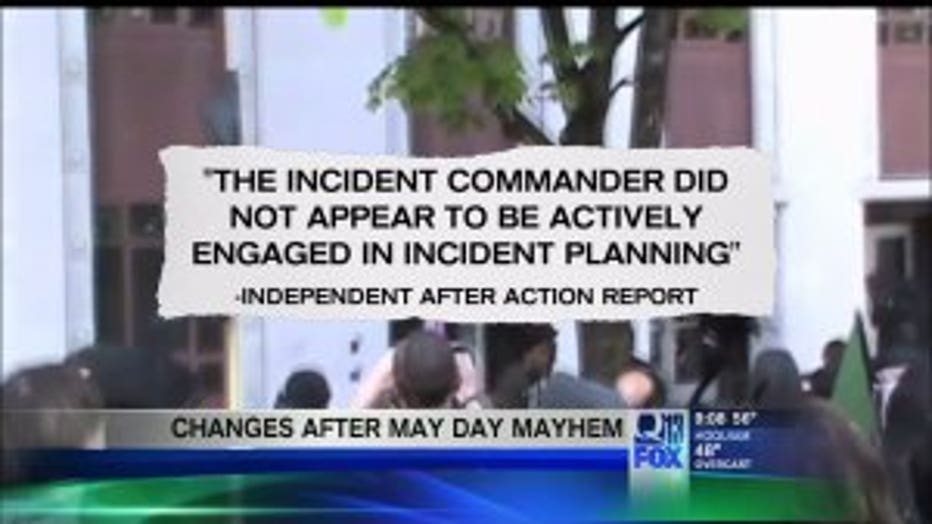 The report detailed a long list of deficiencies inside the Seattle Police Department. It focused on planning, operations, command and control, policies and training.

Among the findings: Department planning did not begin early enough to provide effective deployment and clarity of strategies, resulting in what was ultimately described as conflicting crowd management strategies and confusing direction.

"We now have concluded an internal review and an independent review and those reviews will give recommendations to improve future performance at large-scale demonstrations or protests,” Seattle police Assistant Chief Paul McDonagh said Tuesday.

The incident commander did not ensure adequate resources were deployed and there was no fixed site established for the Incident Command Post.

Finally, the report found, real-time communication between the command staff and street-level officers was insufficient and at times squads on the street acted independently due to an absence of command direction.

Lack of proper training was another major issue.

The report was critical of Assistant Chief Mike Sanford, who charged into a crowd of violent protesters to try to arrest an individual. He became involved in an altercation and fell down, requiring other officers to move into the crowd to rescue him.

"This incident was commented on in all interviews as being an example of questionable tactics utilized by a staff officer and this action created a use-of-force situation," the report said.

One of the more interesting recommendations was that SPD work with the City Attorney's Office to restrict the so-called rain city super heroes from creating crime and interfering with law enforcement operations.