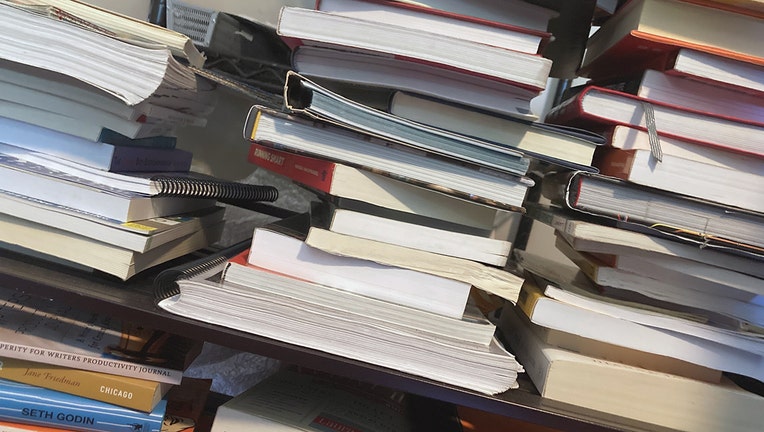 NEW YORK (AP) - Laura Romani, a Chicago-area resident with a background in education and library science, had been thinking of a new career.

"I was at home a couple of years ago reflecting on all the experience I gained and how I wanted to contribute to the Latino community, while also allowing myself to be on my own and make use of my love for books and passion for multilingualism," she says.

The solution: Start a bookstore. With help from a local grant and stimulus checks that she and her husband received during the pandemic, Romani launched Los Amigos Books, initially as an online store last year and now with a small physical outlet with a bright blue front in Berwyn, Illinois. It focuses on children's stories in English and Spanish.

"It all goes hand in hand," Romani says of her decision.

Stores like Romani's helped contribute to a year of solid growth and greater diversity for the American Booksellers Association, the trade group for independent bookstore owners. According to CEO Allison Hill, the association now has 2,010 members, at 2,547 locations, an increase of more than 300 since Spring 2021. It's the highest ABA total in years, even though the association in 2020 tightened its rules and permitted only stores which "primarily sell books" (over 50 percent of inventory), as opposed to any stores offering books. The ABA also no longer counts sellers whose memberships are inactive.

Hill attributes some rise to owners who delayed renewing their memberships early in 2021, reflecting uncertainty about the pandemic's impact. But a substantial number of additions, well over 100, are stores that have opened over the past year, dozens of them owned by people from a wider variety of racial and ethnic groups. Those stores range from Libelula Books & Co. in San Diego to Yu and Me Books in New York City's Chinatown, from Modern Tribe Bookshop in Killeen, Texas, to Socialight Society in Lansing, Michigan.

The ABA, long predominantly white, established a diversity and inclusion committee last year after board president Jamie Fiocco acknowledged in June 2020 — in the wake of George Floyd's murder — that the association had not done enough to "break down barriers to membership and service for Black, indigenous and people of color."

"The rise in BIPOC stores is a big change for us," Hill says.

Like Romani, many new owners had previous careers, or still have them on the side. Sonyah Spencer works as a consultant to help finance The Urban Reader in Charlotte, North Carolina, a store focusing on African American books that she opened in part because of the Black Lives Matter movement and her concern about a rise in book bans. In Locust Grove, Georgia, Erica Atkins was a college teacher and trainer who, while recuperating from surgery, had a vision — a divine one, she believes — that she should open a store, what is now Birdsong Books.

"I have dedicated my life to knowledge sharing," she says. "Anytime I am having a conversation with someone, I am giving book recommendations."

In Ossining, Westchester County, New York, Amy Hall is a vice president at Eileen Fisher who says her work in fashion inspired her to open Hudson Valley Books for Humanity. She had been looking through her bookshelves and began thinking about how sustainability in clothing could apply to what she reads. She decided to start a store that would offer mostly used books, and otherwise reflect the economic and ethnic diversity of Ossining.

"I wanted to build a bookstore that welcomed people from all of these different segments of our community," she said. The new books she keeps in stock focus on social justice and the environment, among other issues.

After initial worries that the pandemic would devastate book sales, publishers have recorded strong profits in the past two years and independent sellers have endured. Hill and others had feared that hundreds of member stores might close in 2020. Instead, around 80 shut down, and only 41 went out of business in 2021.

Independent bookselling is a resilient business, but rarely secure. It has for decades been a story of confronting obstacles — whether the rise of Barnes & Noble "superstores" in the 1990s that helped drive thousands of ABA members out of business, the growing power of Amazon.com, or such recent issues as supply chain delays and price inflation.

Spencer at the Urban Reader says higher costs, notably for rent and shipping, have made her struggle to break even. Atkins of Birdsong Books has noticed a big jump in prices for Bibles, with the price of a King James edition increasing by several dollars. At the Changing Hands Bookstores in Arizona, buyer Miranda Myers has noticed several price changes, including for Emily St. John Mandel's "Sea of Tranquillity," one of the top literary releases of the spring, and the upcoming Lore Olympus book by Rachel Smythe.

Myers said she was "definitely noticing these price increases happening more and more lately." At the same time, according to Changing Hands owner Gayle Shanks, sales "are up, way up. We had the best first quarter we've ever had in the store's history and this second quarter is also tracking way up. People seem to be reading more than ever."