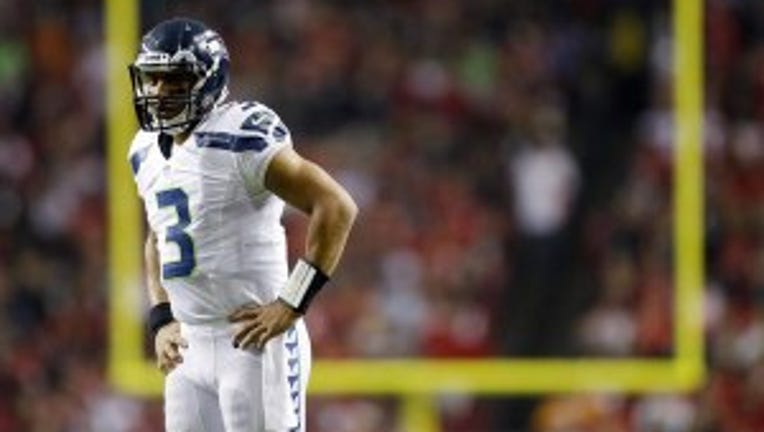 ATLANTA -- The Seattle Seahawks mounted one of the greatest comebacks in NFL playoff history.

But in the end, it wasn't enough.

The Seahawks trailed the Atlanta Falcons by as much as 27-7  late in the third quarter. And though the Hawks scored three quick touchdowns in the fourth quarter to take the lead, the Hawks' season ended on a Falcons field goal, sending the Hawks home with a 30-28 loss.

For the moment, a win seemed like a predetermined destiny. Marshawn Lynch ran in for a touchdown with 31 seconds to go in the fourth quarter to put the team up 28-27.

But the Seahawks defense, which had struggled all day long against a potent Matt Ryan passing offense allowed two quick passes to set up a 49-yard Matt Bryant field goal with 8 seconds left in the game.

The Hawks got the ball back in good field position, however, and there looked to be a chance until a last-second Hail Mary from Russell Wilson failed to hit its mark and was intercepted by Falcons' wide receiver Julio Jones in the end zone as time expired.

Just like that, the season ended. But at least the team didn't go down without a fight.

A blowout looked like a more likely outcome than a last-minute pass for most of the game. The Falcons opened scoring with a 39-yard Matt Bryant Field goal, followed by a 1-yard touchdown pass from Matt Ryan. The Hawks running game was stifled by a strong defense, with star running back Marshawn Lynch, who had been hampered by a foot injury earlier in the week, running for only 46 yards on 16 carries.

The Falcons went into halftime up 20-0. And though the Hawks started things in the third quarter quickly with a 29-yard touchdown pass from Wilson to Golden Tate, the Falcons answered back with a 5-yard pass from Matt Ryan to Jason Snelling, putting the game seemingly out of reach for the Hawks.

Russell Wilson scored on a 1-yard run with 13:01 to go in the fourth quarter. A Matt Ryan interception gave the Seahawks the ball back in good field position and Zach Miller scored on a 3-yard pass from Russell Wilson. The Seattle defense, which had been paralyzed by more than 100 yards from Falcons running back Michael Turner, finally showed some life and stopped Ryan and his offense short to again get the ball back.

Wilson and the Hawks started their final scoring drive with around 3 minutes to go down 27-21. The dependable rookie quarterback led the team on a 7-play, 61-yard touchdown drive, ending on 1-yard run from Marshawn Lynch, putting the Hawks up 28-27 with 31 seconds left in the game.

But Ryan, hampered by his inabilitly to lead strong Falcons teams to the playoffs in the past, secured two quick passes, including a 19-yard touchdown pass to veteran tight end Tony Gonzalez to put the Falcons in field goal range. Kicker Matt Bryant punched it in from 49 yards out, all but securing the Falcons' victory.

The Hawks saw a glimmer of hope after a muffed kickoff by the Falcons. Yet a last-second Hail Mary from Russell Wilson was not to be, stopping the team of destiny in their tracks.

Wilson went 24-for-36 with 385 yards and two touchdowns. He secured a better passing rating than Ryan, who threw three touchdowns and 2 interceptions.

After the game, coach Pete Carroll tried to remain upbeat.

"I hate to be talking about this because we got beat, but the future is very bright for this team."

The Seahawks finished the year with a 12-6 record, their best under Carroll.