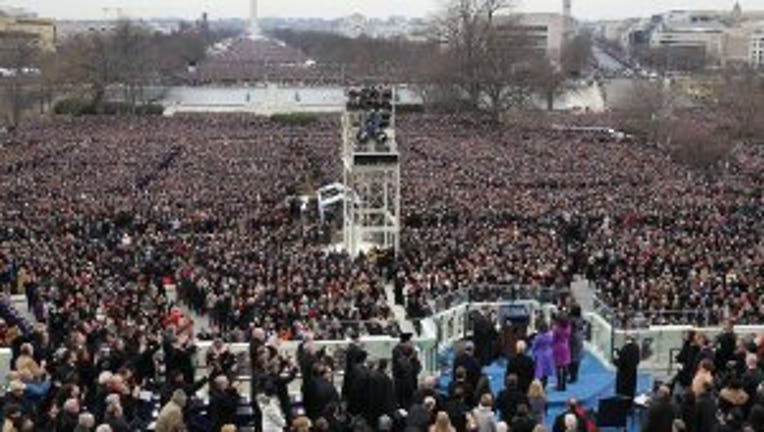 WASHINGTON — Beyonce had belted her last note and President Obama, newly sworn in for a second term, had grabbed his last hand and given his last hug. But as he walked off the inauguration platform and through an archway to the Capitol, the president turned again to face the people who came to see him.

"I want to take a look one more time," Obama said, stopping his Secret Service detail. He smiled, eyes fixed in the distance. "I'm not going to see this again."

What Obama saw was a throng of Americans filling their capital on Monday. They were waving their country's flag, cheering their president, honoring their history and celebrating their government, adding a sheen of celebratory unity to a capital more accustomed to political division.

Hazel Carter from Springfield, Ohio, who is 90 and who attended Obama's first swearing-in, had vowed not to miss this one: "I prayed, 'God, just let me keep breathing until the inauguration.'"

Charlie and Zan Thompson, in their 60s, flew in from Phoenix, despite Charlie's bad knee. Zan pushed her husband in a wheelchair for 45 minutes to the National Mall. She could persevere, she said, just as the president had in his first term.

And Patrecia McClein, 39, was there even though she and her husband Shawn, 37, went to bed Sunday night in Rochester, N.Y., with no plans to be in Washington.

Hundreds of thousands of people filled Washington's streets, far less than the estimated 1.8 million who attended Obama's first inauguration. The differences from 2009 were notable. The traditional lineup of events — the swearing-in outside the Capitol's West Front, parade down Pennsylvania Avenue and night of balls — was all less complicated without the crush of humanity drawn to the first inauguration of the first African American president.

There were other shifts in mood: expectations lowered after years of partisan gridlock, hopes tempered by disappointment. And toes warmed by noticeably higher temperatures.

Still, the attendees said they felt the weight of history.

"I always wanted to come to something like this, going back to Martin Luther King," said James Sutton, 63, a taxi driver who made the 12-hour drive from Chicago. He said he didn't expect to see another African American president. "Not in my lifetime. I just wanted to be able to say I was there."

Obama's inauguration coincided with the federal holiday celebrating King, who delivered his "I Have a Dream" speech at the other end of the mall in 1963. Monday's ceremony in many ways directly honored the civil rights struggle that made Obama's presidency possible.

The event began with an invocation from Myrlie Evers-Williams, widow of slain civil rights leader Medgar Evers. Evers-Williams paid homage to the leaders "who allowed us to move from a nation of unborn hopes and a history of disenfranchised votes to today's expression of a more perfect union."

As he took the oath, Obama placed his hand on two Bibles — one owned by King, the other used by Abraham Lincln when he was sworn in on March 4, 1861. After Monday's ceremony, at the request of the King family, the president and Chief Justice John G. Roberts Jr. inscribed the King family Bible.

Obama's inaugural address opened with an immediate acknowledgment of the history that had brought him to that moment. "Through blood drawn by lash and blood drawn by sword, we learned that no union founded on the principles of liberty and equality could survive half-slave and half-free," Obama said. "We made ourselves anew, and vowed to move forward together."

His speech was seasoned with calls for togetherness, and his schedule included opportunities to practice it — at least for a day. Per tradition, Obama invited congressional leaders to coffee at the White House, including his chief political adversary: House Speaker John Boehner, R-Ohio.

The president also attended a traditional luncheon with lawmakers, where Boehner suggested the meal was an opportunity to "renew the old appeal to better angels."

Although Obama's speech offered a liberal vision, for the most part the day was light on partisanship, heavy on pomp. From the luncheon, the president and First Lady Michelle Obama crept down Pennsylvania Avenue in the president's hulking limousine known as "the beast."

The two stepped out to stroll and wave at a crowd that greeted them with shrieks and an eclectic mix of signs.

"There has never been anything false about hope," one read.

"No corn subsidies," said another.

The day was a rare opportunity to see the Obama family interact — with some rarer unguarded moments. First daughters Malia, 14, and Sasha, 11, could be seen bouncing in the cold and fiddling with their dresses. Sasha was caught on camera yawning during her father's speech. The girls snapped photos during the inaugural parade, while the president vigorously chomped on gum.

As always, the celebration was also an opportunity for commerce.

Souvenir hawkers staked out prime spots. Obama's visage was plastered on buttons, hats, even the official Metro ticket. One entrepreneur charged $1 for a photo next to an Obama cardboard cutout. Another tried rather unsuccessfully to sell Obama inaugural commemorative condoms.

Octavius Glenn, 35, of Brooklyn, N.Y., peddled cologne he insisted was a presidential favorite. "Get your Obama oil! Only here! Obama oil!" he shouted. "This stuff is the real deal."

As the sun went down, the party moved inside to a slew of balls tailored to every state and interest group. The Obamas had only two appearances on their dance card, compared with 10 at the first inauguration: the Commander in Chief's Ball for military families and the official inaugural ball.

Officials were expecting 30,000 people to attend the latter affair, held in a cavernous convention hall. In keeping with the lower-key tone, the decor was minimal and the vibe democratic. Tables covered in red-and-yellow tablecloths held massive bowls of pretzels, mixed nuts and Cheez-Its.

Obama arrived first at the Commander in Chief's Ball, where he delivered a tribute to the military and spoke by video with troops in Kandahar, Afghanistan.

At both balls, Obama danced with the first lady to "Let's Stay Together." Al Green made the song famous, and Obama made it presidential, when he sang it to a crowd at the Apollo Theater in New York. On Monday, Jennifer Hudson did the honors at both occasions.