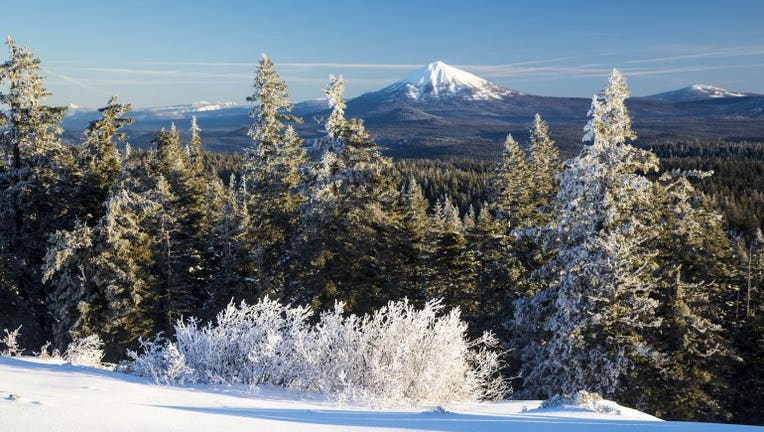 SALEM, Ore. -- A dispute over acts of Congress in 1906 and 1937 has put the Trump administration in court — and into the unusual position of supporting a proclamation by former President Barack Obama.

Contrary to President Donald Trump's numerous efforts to shred Obama's legacy, U.S. Justice Department lawyers are in Obama's corner as they defend his expansion of a national monument in Oregon.

That puts the Trump administration in direct opposition with timber interests that Trump vowed to defend in a May 2016 campaign speech in Eugene, 110 miles (180 kilometers) south of Portland.

However, that opposition may be temporary in a case full of ironic twists that centers on a unique habitat where three mountain ranges converge. It is home to more than 200 bird species, the imperiled Oregon spotted frog, deer, elk and many kinds of fish, including the endangered Lost River sucker.

A federal judge is being asked to consider limits of power among all three government branches. For the Trump administration, the case is about protecting the power of the president of the United States, even if it was Obama who exercised his authority under the Antiquities Act of 1906 that allows a president to declare a national monument.

During his last week in office, Obama nearly doubled the size of Cascade-Siskiyou National Monument in heavily forested southern Oregon, to more than 150 square miles (390 square kilometers). Commercial timber harvesting is prohibited in the monument except for ecological restoration, so logging companies and local governments were deprived of revenue from timber that was suddenly placed out of their reach.

In March 2017, the American Forest Resource Council, a timber-industry advocacy group, sued the federal government in U.S. District Court for the District of Columbia, charging that Obama's expansion of the monument was unlawful. A group of Oregon counties that receive revenue from logging sued separately in the same court.

The advocacy group insisted Obama exceeded his authority because Congress in 1937 designated much of the land in question for timber harvesting to allow local communities to prosper. The expanded area included 62 square miles (160 square kilometers) designated by Congress for "permanent forest production," the group said, telling the court its members "rely on timber sourced from federal lands in and around the Monument to support profitable operations."

Some observers, seeing the Trump administration develop a record of favoring business interests over environmental concerns, figured it wouldn't fight the lawsuits.

"I was worried that the timber industry and DOJ would come to an agreement that would not be good for the monument," said Susan Jane Brown, an attorney for environmental groups.

Instead, after a lengthy pause in the court proceedings, Justice Department attorneys in June asked the judge handling both lawsuits to rule in the government's favor without trial.

"I don't see this at all as the administration siding with the environmentalists, but rather doing all they can to shore up presidential power," said Rhett Lawrence, conservation director of the Sierra Club's Oregon chapter.

In taking that approach, the administration lawyers said even the judiciary branch has little say in the matter. When a president acts with authority delegated to him by Congress, they wrote, judicial review "if available at all, is extremely limited in scope."

"A suit against the President in his official capacity is a suit against the United States itself," wrote Acting Assistant Attorney General Jeffrey Wood and two Justice Department attorneys.

They noted Congress, under the Antiquities Act, gave the president the power to declare objects of historical and scientific interest as national monuments, and to reserve federal lands for their protection.

Cases challenging presidential authority under the Antiquities Act usually fail, said Lawson Fite, the forest council's general counsel. But he said this one is different because of the statute Congress passed in 1937.

"Our case is about whether the president has the authority to unilaterally disregard an act of Congress," Fite said in an email.

Fite says history backs his side, citing a 1940 letter from the Interior Department's head lawyer under President Franklin D. Roosevelt. In it, solicitor Nathan Margold concluded Roosevelt could not expand another national monument into land designated by Congress for other purposes.

"This is quite an interesting case as it so depends on separation of powers," Fite said. "We don't agree that the president's power is so broad."

A final irony: Even if Trump's administration prevails in court in defending Obama's expansion of the Oregon monument, the president might wind up reducing it.

Brown represents environmental groups that have intervened in the lawsuits on behalf of the government defendants. She said if Trump shrinks Cascade-Siskiyou, "we'd probably challenge it in court."

"We think the Antiquities Act does give the president discretion to establish monuments, but not to shrink or abolish them," Brown said.

The case continues in early August when the next briefs are due.