The International Monetary Fund has sharply lowered its forecast for global growth this year because it envisions far more severe economic damage from the coronavirus than it did just two months ago.

ANN ARBOR, Mich. (AP) - Perry Porikos sat in the street outside one of his five businesses, in a makeshift patio area that didn’t exist before the COVID-19 pandemic sent his best customers — University of Michigan students — back home in mid-March.

The Greek immigrant arrived here more than four decades ago as a 20-year-old soccer player for the Wolverines and part-time dishwasher at The Brown Jug Restaurant, which he now owns. He nonchalantly dropped names of sports stars like Tom Brady and Michael Phelps, two of the many former Michigan students he counts as friends, and recalled hustling enough to own more than 10 businesses at one time.

“Living the dream that people talk about, especially if you live in Europe and you come here,” Porikos said, “I am the dream.”

Lately, though, it has been difficult for Porikos to rest easy. And he’s not alone.

Both the stress and the stakes are high for all the small business owners near Michigan's campus on and around South University Avenue, which winds through the city of about 120,000 residents -- about one-third of them students.

EDITOR’S NOTE — Small businesses around the world are fighting for survival amid the economic fallout from the coronavirus pandemic. Whether they make it will affect not just local economies but the fabric of communities. Associated Press journalists tell their stories in the series “Small Business Struggles.”

The fall term will begin Monday with at least some in-person classes on campus, which has generated equal parts of hope and anxiety for those who need students to return to pay the bills.

A big part of the worry: Will students take the measures essential to keep infections from surging? The early signs aren’t promising. Alarmed by pictures of unsafe partying, the Ann Arbor City Council this week enacted an emergency ordinance that reinforces the state’s requirement to wear masks and also places restrictions on gatherings.

Across the country, business owners in college towns share the fear that student support could dry up almost entirely, and many are scrambling for survival strategies.

Nick Ducoff, co-author of “Better Off After College,” said businesses catering primarily to students might be able offset some losses through delivery and e-commerce, but that many could find the effects devastating.

“Smaller town-and-gown communities will suffer if students stay with their parents and don’t return to campus, but colleges in cities with larger populations and more diversified economies like Austin and Boston will be less affected,” Ducoff said.

In Ann Arbor, Espresso Royale Coffee -- just steps from an arched walkway on The Diag, a collection of diagonal sidewalks in the middle of campus — already has its windows covered by brown paper. The once-successful shop closed and is not coming back due to the pandemic, according to its website.

“Espresso Royale is the first place that you see when you come through that arch,” 22-year-old University of Michigan graduate Chris Young said as he dined with friends at Good Time Charley’s patio. “To hear that was gone was really, really surprising to me. Also, just really sad because it shows the impact that all of this has had on something that’s so central and personal to so many students.”

About two blocks down, a sports bar and a nightclub that Porikos owns are at least temporarily shuttered due to an executive order from Gov. Gretchen Whitmer because alcohol accounts for at least 70% of their gross receipts. 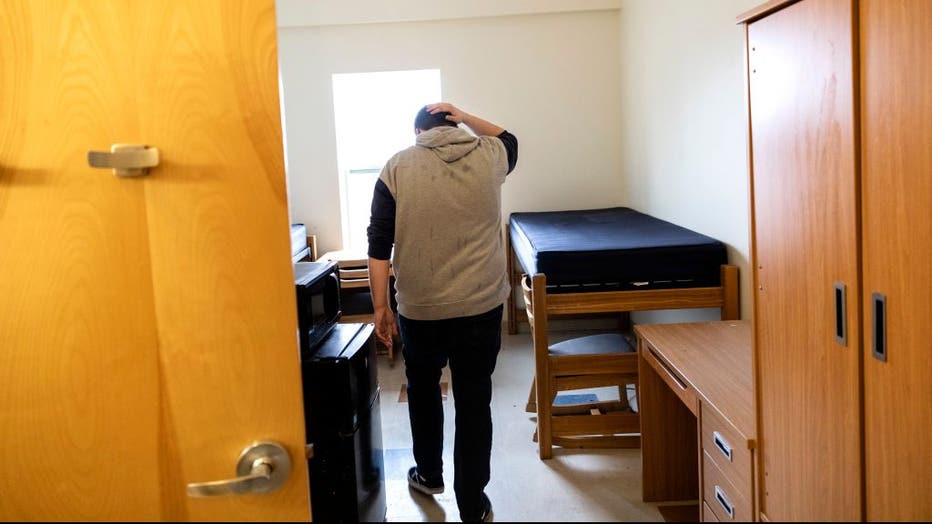 FILE - Conner Hudson checks for the last of his belongings as he moves out of his dorm the Spring Point Residence Hall on SMCCs campus on Thursday, March 19, 2020. (Staff photo by Brianna Soukup/Portland Press Herald via Getty Images)

Others who own businesses on or near the three-block stretch known as South U are praying they can hang on long enough to still be standing whenever it becomes business as usual again.

“This is going to be an unprecedented time that we’re entering into to see if this street can survive,” said Justin Herrick, the co-owner of Good Time Charley’s, a neighborhood staple since the late 1970s.

When the pandemic sent many of the school’s 40,000-plus students back to all parts of the globe earlier this year, the center of the college town’s small-business district became eerily quiet.

“It was like a three-foot blizzard without snow,” recalled Richard Schubach, who owns Replenish, a small grocery store across the street from campus, on the ground floor of a high-end apartment complex that caters to students.

While The Brown Jug and Porikos’ Backroom Pizza have been open and are expected to survive, the doors at the nearby Blue Leprechaun and Study Hall Lounge that he also owns may stay closed for good.

“If I don’t have higher capacity, I cannot make it,” the 62-year-old Porikos said between drags of a cigarette. “Couples have to stay six feet apart? Instead of having 50 people dancing, you got 12. Who’s going to come and enjoy themselves and not be able to dance with their friends? What kind of club is that?”

Earlier this summer, Porikos popped up out of the only occupied chair on the Brown Jug’s patio to greet a reporter, apologizing in advance if he had to get up again to seat customers. Sadly, that wasn’t necessary. He was uninterrupted by business over the next hour at his bar and restaurant, which has been a go-to destination for University of Michigan students since 1936.

“It’s going to take a long time to recover from my losses,” he said softly.

RELATED: Stores focus on cleaning to get shoppers back to spending

As the summer wore on, many business owners across the U.S. didn’t even know what to brace for as colleges considered whether to hold in-person classes or make all learning remote. And even then, decisions changed: Some schools had planned to provide at least some in-person instruction, only to reverse course and move classes online amid outbreaks linked in some cases to student housing and parties.

The University of North Carolina, Michigan State and Notre Dame were among the colleges announcing recently that they were making a switch to teach remotely.

Purdue, Syracuse and other schools have suspended students for gathering in large groups at parties, as colleges crack down on the kind of socializing that can spread the coronavirus. And the Tuscaloosa mayor said he would close bars for two weeks after what University of Alabama officials called an unacceptable rise in COVID cases on campus.

The University of Michigan, meanwhile, is attempting to stick to its plan to pack people in dorms while students off campus move into high-rise apartments and single-family homes.

Two blocks off South U on a sun-splashed afternoon, 20-year-old Ethan Ruwe from Edina, Minnesota, took a break from moving into his rented house to share his feelings about fellow students socializing upon their return.

“I really, really hope people adhere to the guidelines, but I’m not sure if that’s going to happen,” said Ruwe, a junior studying neuroscience, adding that “my more realistic self says here for a month or two and then cases spike and things kind of get shut down again.”

“We love the students. They’re the lifeblood of the business,” Good Time Charley’s co-owner Adam Lowenstein said. “But having them manage their social behaviors is the big concern. If they can do that and we don’t see a big spike in numbers, then we can stay open.”

If not, some businesses in this and other college towns may not last much longer.

Porikos, who was born and raised near Athens, came to the United States in 1978. Outside of a brief semi-pro soccer career, he has made Ann Arbor his home, marrying a local woman and raising a son who also played hockey for the Wolverines.

“We lost already quite a few businesses that had been around for a long time,” he lamented. “And I hate to say that — it might include me — but I think there are a lot more to come.”