The Democratic governor put pens to paper at a desk brought up from Springfield that his administration says President Abraham Lincoln used to write his first inaugural address. That speech, delivered on March 4, 1861 as the Civil War was unfolding, called on Americans to heed “the better angels of our nature.”

“Love never fails and I’m going to sign this bill right now,” said Quinn, who used many pens to sign his name to the bill so that those who helped pass the measure could have a souvenir. 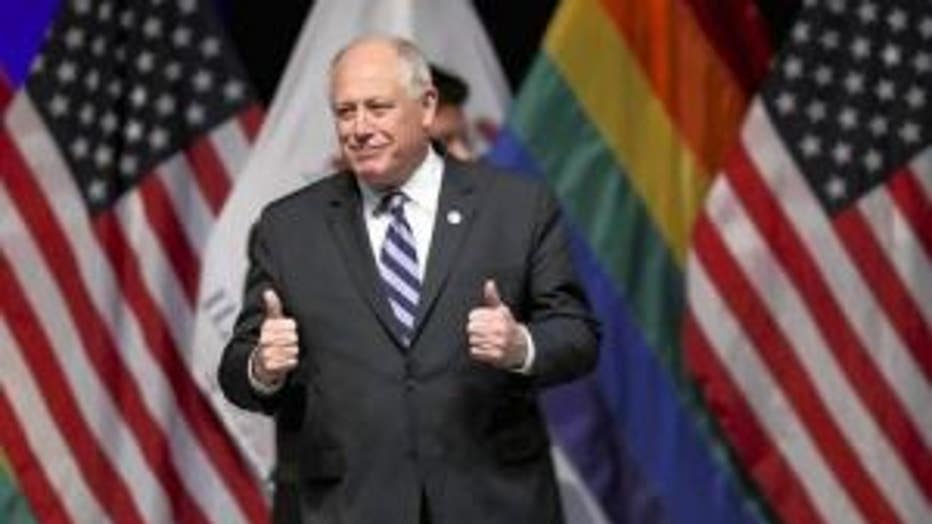 The bill signing capped a gay rights push in Illinois that’s gained major momentum since 2005. That year, then-Gov. Rod Blagojevich signed a gay rights measure into law --- a bill that had failed to pass since 1974. In January 2011, Quinn signed a civil unions measure.

Republican Judy Baar Topinka said it took both parties to get the bill passed. One Republican voted for the bill in the Senate and three in the House. “They were there,” said Topinka, who went on to add she’s available to be a “flower girl” at gay weddings and “will even waive the fee.”

More than 2,000 people packed into the University of Illinois-Chicago Forum to watch the signing ceremony.

Casey Cameron, 38, traveled from Downstate St. Elmo, saying it represents a huge step forward for the gay rights movement given the intense fight that took place just years ago to ensure gays and lesbians had equal access to housing and employment opportunities on Illinois.

"It took a long time and a very tall mountain to get that, and to finally see this is quite an amazing bit of accomplishment for the state," Cameron said.

"The whole vision of Lincoln was setting free an entire group of oppressed people, and that's what's happening today in his state, which is also my state."

Seth Hannen, 20, of Downstate Tremont, said he hoped the new law would give hope to gay teenagers facing adversity by demonstrating they are equal to their peers.

"I grew up in a very small, conservative school district. I was he first out kid in my school district and I was teased a lot for who I was," Hannen said. "If we make this legal, it normalizes it, it makes it more of an accepted thing and that will filter into the rest of society so in ten years that boy who was like me in high school won't have an issue."

The stage was decorated in several dozen flags, alternating between the U.S. flag, the state flag and rainbow flags representing the GLBT community. Seats are adorned with programs and miniature rainbow flags featuring the outline of the state of Illinois.

The celebratory tone is a marked departure from late May, when the legislation stalled in the House to the bitter disappointment of advocates who had been pressing for a vote on gay marriage since shortly after Illinois legalized civil unions in 2011.