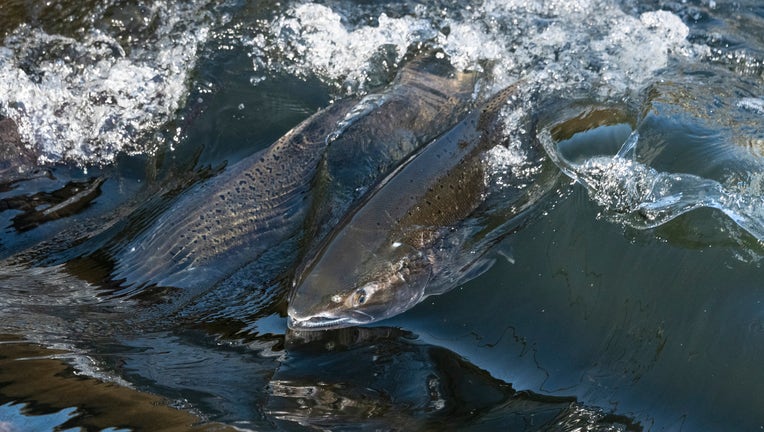 An adult King salmon swims upstream towards the holding pool before spawning at the Nimbus Fish Hatchery in Sacramento, California, United States on Sunday, November 17, 2019. Salmon and steelhead trout returns from the ocean to the streams of their

A Republican congressman has proposed removing four hydroelectric dams in the Northwest as part of a sweeping new plan to address the decades-long problem of how to save salmon populations without upending a system that provides power to millions of people.

The $33.5 billion proposal from Rep. Mike Simpson of Idaho would breach four dams on the Lower Snake River by the end of the next decade, freeing up the waterway for long-ranging salmon that are also a key food source for orcas. The plan, which was unveiled late Saturday, would pay for finding ways to replace the dams’ key roles in energy, agriculture and transportation.

The idea is unusual for a Republican and marks the first time a sitting senior elected official has ever asked the region to consider breaching dams that are still functioning, the Seattle Times reported.

Key to Simpson’s plan would be asking for some $33 billion in a jobs-and-infrastructure stimulus package expected from the Biden administration this year. As Democrats take power in the nation’s capital, the congressional delegations from Democratic-leaning Northwest states such as Washington and Oregon will have greater clout.

Simpson has also gotten the interest of some officials from groups such as power utilities, businesses and farmers. They’re worried if they don’t come to an agreement, they might see a plan handed down from a judge instead.

Environmentalists have long supported breaching the dams, and in exchange — under Simpson’s plan — they would agree not use their key leverage tool: lawsuits, the Idaho Statesman reported.

The conversation comes at a key time for the fish. Eight dams along the Snake and Columbia rivers hinder their migration to the Pacific and half of the young salmon die on the trip. Idaho salmon runs have dwindled from the millions of wild fish to only a few thousand some years.

Simpson’s plan could be a turning point on the issue mired in decades of court battles and ballooning costs, but there’s still plenty of disagreement.

"These dams are the beating heart of Eastern Washington," said Republican Rep. Cathy McMorris Rodgers of Spokane in a statement. "Spending $33 billion to breach them — with no guarantee that doing so will restore salmon populations — is a drastic, fiscally irresponsible leap to take."

"I want to be clear that I’m not certain removing these dams will restore Idaho salmon and prevent their extinction," Simpson told the Statesman. "But I am certain if we do not take this course of action, we are condemning Idaho salmon to extinction."