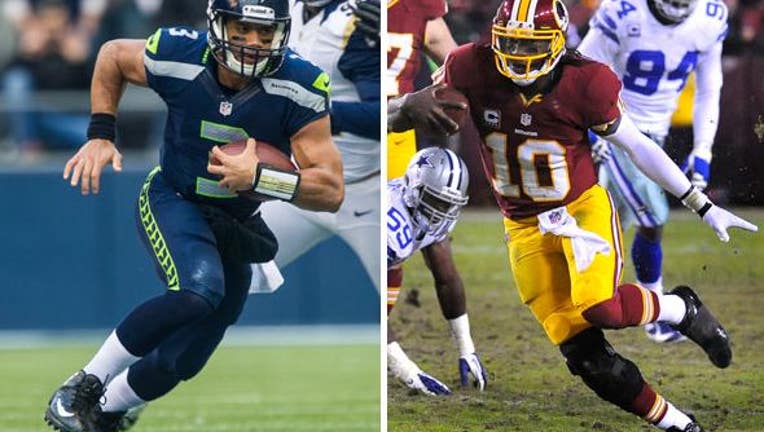 LANDOVER, Md. -- The Seattle Seahawks and Washington Redskins are on the same schedule as a regular season NFL game -- it's been one week since their last games and this week's wild card contest at FedEx Field in Landover has felt like it's been a long time coming.

It takes 17 weeks to reach this point -- the second season -- and it feels as if kickoff is taking far too long. If you're experiencing that stressful feeling of anticipation and a little anxiety on this "Blue Friday," rest assured, you are not alone.

Here is the latest news I can offer as each team finishes their final practices: Fans in the nation's capital have been nervously waiting to hear about the health of quarterback Robert Griffin III. While he is healthy enough to play, Redskins'  coach Mike Shanahan said Friday that Griffin is expected to wear the full knee brace he wore last week after suffering a sprained knee Dec. 9.

Griffin is still dangerous, but there is no doubt he isn't the same explosive player with his brace and the sore knee. Before he was hurt, RGIII was averaging 9.5 carries a game and many of those carries were designed runs. Since the injury, he has eight total carries in two games, most of which were not designed runs.

If for some reason the full knee brace is not on his leg Sunday, be afraid -- very afraid.

The Seahawks, meanwhile, are as healthy as they possibly can be. There may be some concern for Leroy Hill, but Malcom Smith may have earned that starting spot anyway. The bottom line is that the Seahawks injury situation is as good as it can be as they head into the season's 18th week.

Here are some final numbers to think about and, hopefully, give you enough reason to remain optimistic for the Seahawks: We know the two quarterbacks could cancel each other out. The same goes for the two running backs. I would say that the Seahawks' defense is better than the Redskins -- in fact, significantly better -- everyone knows by now the Seahawks have the top scoring defense in the NFL and have allowed the fewest points this season.

Of course, they are far from perfect: One of the issues is getting off the field on the third down. And while the Hawks are just below average in the NFL, allowing opponents to convert 38.4 percent of their third downs, the Redskins are one of the worst in the league -- the Redskins' opponents are converting 44.2% of their third downs -- which ranks them 32nd in the NFL, and let's not forget that there are 32 teams in the league. I wasn't a math major, but I think those are significant numbers and give the Seahawks a huge advantage that hasn't been discussed nearly enough. The advantage goes to Russell Wilson, the second-rated third down passer in the NFC and No. 5 in the NFL.