A local woman who navigates Seattle sidewalks in a wheelchair says the blocked or closed sidewalks are causing her anxiety and pose as a safety risk.

SEATTLE - Walking one block in downtown Seattle may be simple enough for many, but not for Dawn Lucas, who is wheelchair dependent.

Lucas said the blocked sidewalks cause her so much anxiety while trying to get around downtown in her wheelchair. She said she has over reached out to the city for assistance in removing homeless camp tents or fencing that continue to obstruct her path to safely navigate Seattle sidewalks.

"I’ve reached out so many times and I’ve gotten no response whatsoever. I know the city is huge and I’m just a little guy," Lucas said.

In a seven-block radius of where Dawn lives, Q13 News counted 6 obstructed sidewalks on Tuesday.

For example, portions of the sidewalk on 5th and Yesler are off-limits for pedestrians. Bus drivers told Q13 News that it’s a safety problem when they have to dodge people on the busy street every day.

Last year, Lucas said she spent months bypassing tents along South Washington Street. She was forced to jump the curb on her wheelchair and use the bus lanes.Those tents are now gone but the sidewalk is still off-limits as of Tuesday because it’s fenced off.

"I feel ignored mostly by my city councilperson, which is the first person I feel like I should go," Lucas said. 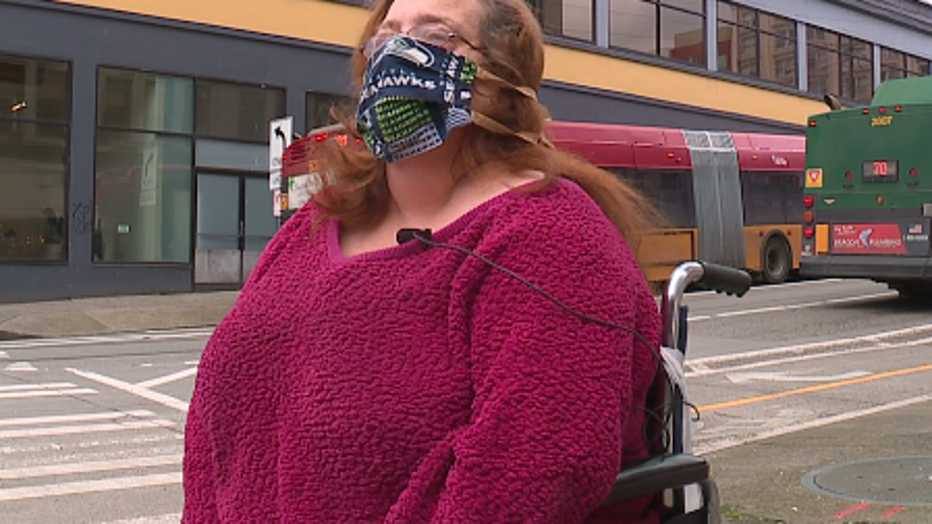 That council member is Tammy Morales since Lucas lives in the Chinatown- International District.

Lucas said the problem goes beyond transportation officials; it’s a direct policy stance around homelessness by council members. The Seattle resident said she understands the plight of the homeless because she’s lived on the streets before.

"I empathize but when it creates a safety hazard something needs to be done," Lucas said.

Business owners are also begging for action. Laura Zeck, who owns an art gallery nearby, says the lack of sidewalk accessibility is also hurting them.

"I don’t want to say that even, because this is where my business is, you put this on air it makes it so more people are scared," Zeck said.

It’s a catch-22 for Zeck. While the business owner is trying everything she can to draw customers into ZINC Contemporary, she also can’t ignore what she is seeing everyday.

Zeck says she witnesses prostitution, drugs and weapons as she passes by some of the sidewalk tents.

Zeck says she has also reached out to city leaders but has received no response.

Lucas says she understands there is no simple solution.

But she says leaving homeless tents on sidewalks is never the answer. Lucas says there has to be a better path.

Q13 News reached out to Tammy Morales on Tuesday. She has yet to respond to the sidewalk issues. But a spokesperson did say that Morales is aware of Dawn Lucas and the two have a meeting set up for Sunday.

If you have a sidewalk issue to report, it goes to the Customer Service Bureau, which is under the Dept. of Finance and Administrative Services.

That department says in 2019 there were 492 complaints about obstructed sidewalks. In 2020 that number doubled to 956. The CSB doesn't have numbers broken down just by tents so obstruction can mean anything from tents, trash to debris blocking sidewalks.