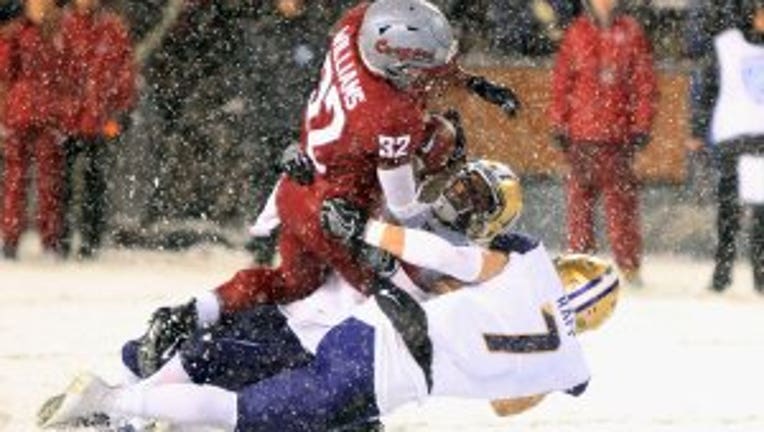 The Huskies and Cougars will meet for the Apple Cup next year at Husky Stadium on Friday, Nov. 29. (Photo by William Mancebo/Getty Images)

The Washington Huskies are Pac-12 champs and in the Rose Bowl.

The Washington State Cougars won 10 games for the first time since 2003.

So, what are the odds both teams have similar success next year?

That’s what fans may be trying to figure out after the Pac-12 released football schedules Tuesday for next season.

Washington and Washington State will face off again in the final contest of the regular season for the Apple Cup. The game will be at Husky Stadium, and will again take place the Friday after Thanksgiving.

The Huskies schedule appears to set up a little better to make another run at the conference title.

Washington will play seven of 12 games at home, while WSU will play six home and six away games.

In addition to having the Apple Cup at home, Washington will host rival Oregon, this year’s Pac-12 South champ Utah, USC and Cal.

They will travel to Stanford, Arizona, Oregon State and Colorado. In the non-conference, the Huskies play Eastern Washington and Hawaii at home and BYU on the road.

The Cougars face Houston, Utah, Arizona State, Oregon and Cal on the road as well as the Huskies.

They start the season with non-conference home games against New Mexico State and Northern Colorado, and later have home Pac-12 matchups against UCLA, Colorado, Stanford and Oregon State.

Both teams will have two bye weeks, which should help with injuries throughout the season.

However it shakes out, don't be surprised if the Pac-12 North is on the line yet again in the Apple Cup.

That, too, is becoming a tradition.