Damage was reported in Lafitte, Louisiana, on September 8 as severe thunderstorms impacted parts of the New Orleans area that were still reeling from Hurricane Ida’s landfall on Aug. 29. (Credit: @cultmenephila via Storyful)

HOUMA, La. - The death toll in Louisiana from Hurricane Ida rose to 26 Wednesday, after health officials reported 11 additional deaths in New Orleans, mostly older people who perished from the heat. The announcement was grim news amid signs the city was returning to normal with almost fully restored power and a lifted nighttime curfew.

While New Orleans was generally rebounding from the storm, hundreds of thousands of people outside the city remained without electricity and some of the hardest-hit areas still had no water. Across southeastern Louisiana, 250,000 students were unable to return to classrooms 10 days after Ida roared ashore with 150 mph (240 kph) winds.

The latest deaths attributed to Ida happened between Aug. 30 and Monday, but were just confirmed as storm-related by the Orleans Parish coroner, the Louisiana Department of Health said in a statement. Nine of the New Orleans deaths — of people ages 64 to 79 — came from "excessive heat during an extended power outage," while the two others were from carbon monoxide poisoning, the department said.

More than a million people were left without power, including the entire city of New Orleans, when Ida struck on Aug. 29. The state's largest power company, Entergy, said it expected to have electricity in the city restored to 90% by Wednesday evening. 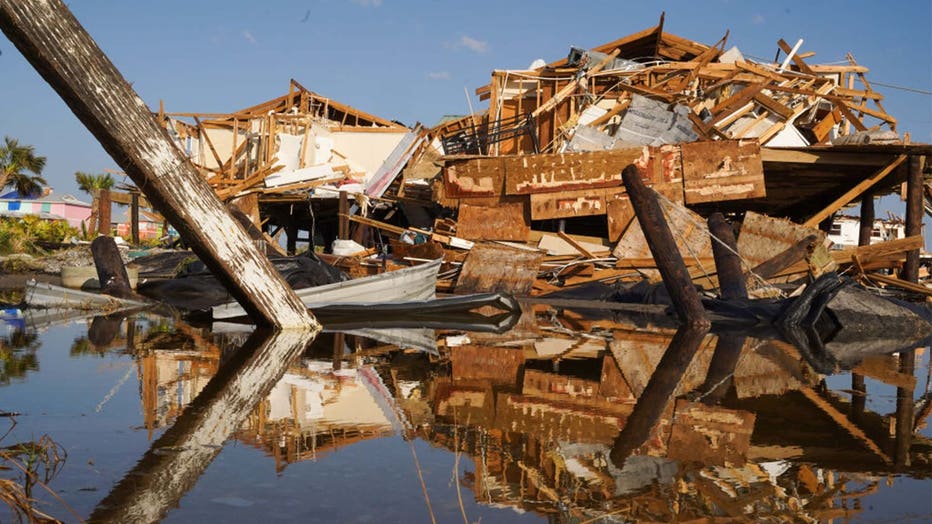 Meanwhile, the New Orleans Police Department and Mayor LaToya Cantrell lifted an 8 p.m. to 6 a.m. curfew they had imposed two days after the hurricane hit.

Across New Orleans and southeastern Louisiana, families are still waiting to hear when their children can return to school, as districts assessed hurricane damage. Prior to Ida, schools around Louisiana had been open despite widespread cases of COVID-19, although under a statewide mask mandate for all indoor locations.

"We need to get those kids back with us as soon as we possibly can," said Superintendent of Education Cade Brumley.

In New Orleans, School Superintendent Henderson Lewis Jr. said damage to schools appeared to be mostly minimal, but power needs to be restored to all buildings, and teachers, staff and families need to return to the city to get schools up and running.

"Now more than ever, our children stand to benefit from the comfort that structured and routine daily schooling can bring," Lewis said in a statement Wednesday. "So, let’s all come together to reopen our schools quickly and safely."

Lewis said he expects classes for some will resume as early as next week and that all students will be back a week after that.

No school reopening estimates have been provided for the five parishes that were hardest hit by Hurricane Ida and which are home to about 320,000 people: Terrebonne, Lafourche, St. James, St. Charles and St. John the Baptist. In those parishes, 96% of utility customers were still without power Wednesday.

Farther south, in the Terrebonne Parish city of Houma, trucks with linemen were on every street, and as the day progressed there were signs of progress: Traffic lights started flickering on, although sporadically, on busy Grand Caillou road by early afternoon.

Linemen also were working south of Houma, in rural Terrebonne along Bayou Grand Caillou. But many of the homes were in no shape to connect. Coy Verdin was staying at his son’s house in Houma. The home the 52-year-old fisherman shares with his wife, Pamela, near the bayou was a soggy, smelly mess, all but destroyed in the storm.

"All the ceilings fell. You can see daylight through the roof," Verdin said. "All we have is basically a shell."

Ida scattered most of his 200 crab traps to parts unknown. "The only thing I have left is my boat and some of my commercial fishing rigging," he said.

RELATED: Ida vs. Katrina: How do they compare?

The St. John the Baptist Parish School System website said all schools and offices will be closed "until further notification." Lafourche Parish Schools Superintendent Jarod Martin indicated a "long and extensive road to recovery" on that school system's website, with no timeline for a return in sight.

"Until power is restored to our facilities and we’re able to obtain further information regarding damage to the infrastructure of our schools, we’re unable to provide an estimated date for a return to in-person learning," the St. James Parish public school system said in an update posted Wednesday.

Statewide, about 342,000 homes and businesses remained without power Wednesday, according to the Louisiana Public Service Commission.

Access to fuel also remained difficult, with the website GasBuddy.com reporting about 48% of gas stations in Baton Rouge had no gasoline. About 56% of stations in New Orleans were also dry.

RELATED: How to help victims of Hurricane Ida

About 44,000 people were still without running water in Louisiana, the state health department reported. That’s significantly lower than the hundreds of thousands of people who had no water immediately after Ida’s landfall. Still, more than 570,000 people were being told to boil their water for safety.

In many neighborhoods, homes remain uninhabitable. About 3,200 people are in mass shelters around Louisiana while another 25,000 people whose houses have been damaged are staying in hotel rooms through the Federal Emergency Management Agency’s transitional sheltering program.

Louisiana’s secretary of state announced that fall elections will be pushed back by more than a month because of the storm.

In addition to the death and destruction Ida caused in Louisiana, the storm’s remnants brought historic flooding, record rains and tornados from Virginia to Massachusetts, killing at least 50 more people.