SEATTLE- Tens of thousands of homes without power. Trees onto power lines. And homes. And over roads. And crashing into a few chimneys too. The predicted wind and rain storm for Western Washington certainly delivered late Wednesday and early Thursday.

To understand why our winds were so strong, you've got to know a few things about how the atmosphere works. First, winds flow from high pressure to low pressure. Low pressure last night and this morning was moving from the Pacific Ocean onto Vancouver Island. Winds have been flowing from the S/SW with this storm as the center of low pressure stayed just off shore. Winds can gust with quite a bit of strength when they're channeled through narrow gaps in the topography. With this type of southerly wind profile it can be particularly problematic for our many east/west bridges: Hood Canal, 520 (Evergreen Point Floating) Bridge, I-90 and the Tacoma Narrows. 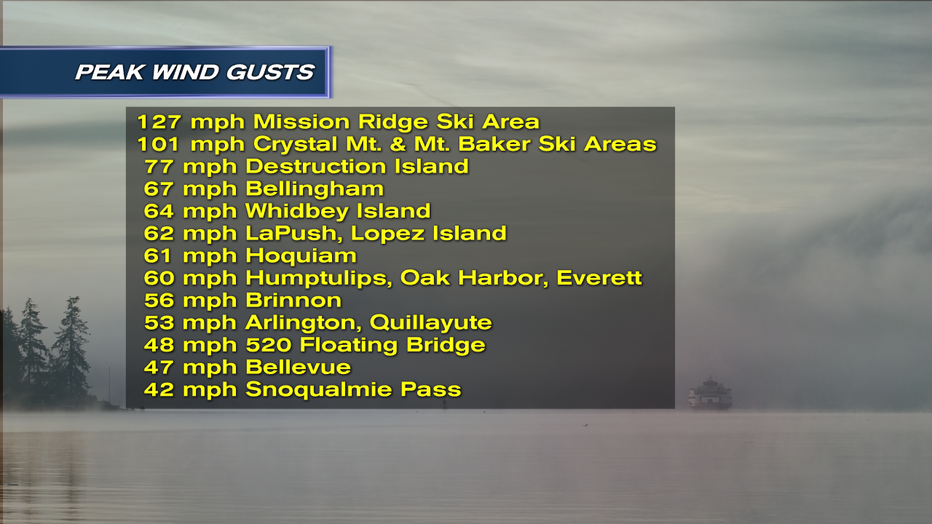 And the wind gusts have been particularly incredible! Some of our ski resorts saw the highest wind gusts of all with several reporting wind gusts in excess of 100mph!

That bring us to the second thing to know about how the atmosphere works-- the less friction you get the stronger the wind.  The ground is full of stuff: trees, buildings. Stuff blocks the wind. Get higher up and the wind has free reign to blow as hard and as fast as it can. Stand on any exposed hill around Puget Sound to try this experiment. You'll discover it's way windier on an exposed hill or peak than you'll see down in your own backyard. (The exception is when your backyard is on an exposed hilltop, of course.) Storms that stay just off shore experience less friction. Size does matter with these type of wind storms. The lower the barometric pressure-- the stronger the storm. But, the bigger the pressure difference between the high and low (or 'pressure gradient' as it's called in meteorological terms) the stronger the winds.

The path of the storm matters too. If a storm is closer to shore, there's greater friction with the land and things on the land. The more friction at the surface, the lower your wind speeds. One of the biggest wind storm ever recorded in the Pacific Northwest was back in October of 1962. You might have heard of it. It  happened on Columbus Day and is remembered as the king of all Pacific Northwest wind storms. With the Columbus Day Storm the center of low pressure stayed just off shore and paralleled the Oregon and then Washington coastline for more than 500 miles. There were 100 mph wind gusts in Renton on that day. 98 mph in Bellingham! In Downtown Portland, the wind gauge on the Morrison Bridge clocked a wind gust of 116 mph before the wind gauge itself blew away. 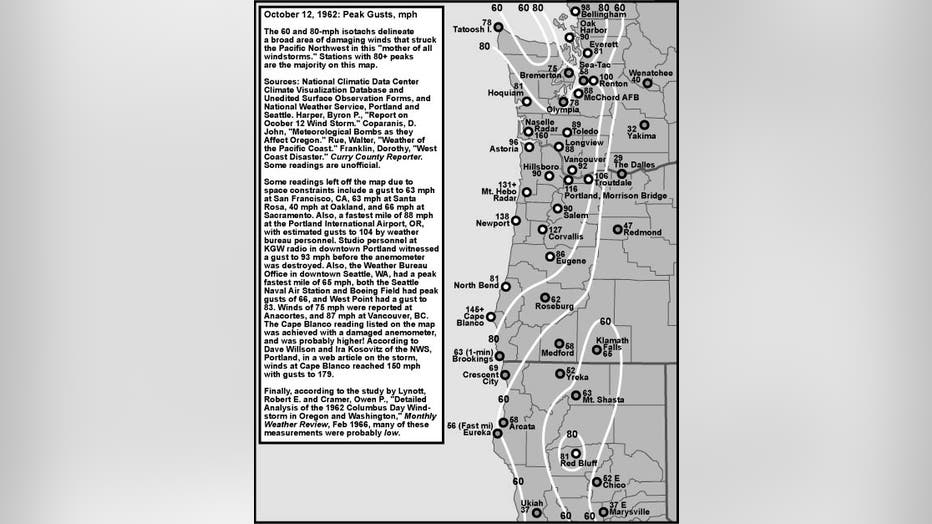 Our recent storm followed a similar, but not exact path across our region. Luckily for us, the storm didn't quite parallel the coast and will be quickly moving inland. A HIGH WIND WARNING is still in effect until noon. And a WIND ADVISORY continues for much of Puget Sound until 4pm.