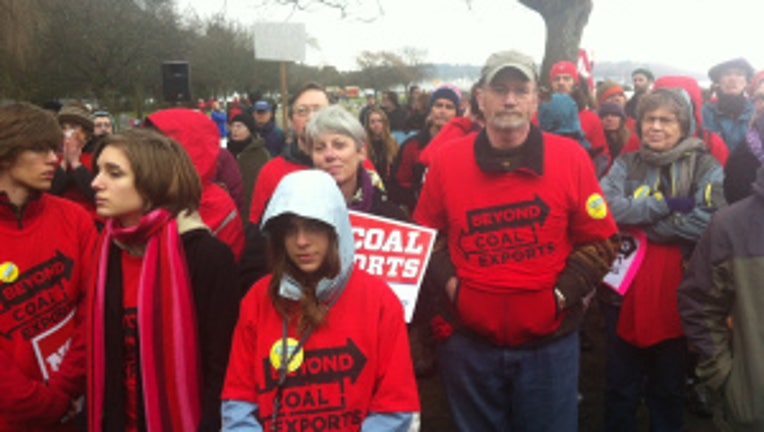 SEATTLE -- Hundreds of people turned out Sunday to protest the possibility of coal trains coming through Seattle.

About 200 people, including Mayor Mike McGinn, rallied in Golden Gardens Park Sunday afternoon. The Walk Against Coal Trains was sponsored by the Sierra Club, a national organization calling for awareness to environmental problems and climate change.

McGinn said the purported benefit of the trains -- area jobs -- were not nearly as promising as coal companies made it sound.

The proposed coal trains would come from the Powder River Basin in Montana and Wyoming, passing through Seattle on there way to the anticipated large export facility near Bellingham, Wash. Critics have attacked the plan, saying selling coal to China not only dirties the environment worldwide, it could harm vital local ecosystems such as the Duwamish River and the Cascade Range.

McGinn said he needed the support of the community to block the trains.

Protest attendee Elissa Dixon has been involved with Sierra Club for a little less than a year. She said she was only partially surprised that the "dirty energy" fight was coming to Seattle.

"It's time go get some clean energy solutions out there," she said.

Those present at the rally voiced their concerns about what effect that the coal shipments would have on the environment, both locally and worldwide. Many people attended the event wore red, No Coal Train T-shirts.

The rally coincided with a larger rally on climate change at the National Mall in Washington, DC.