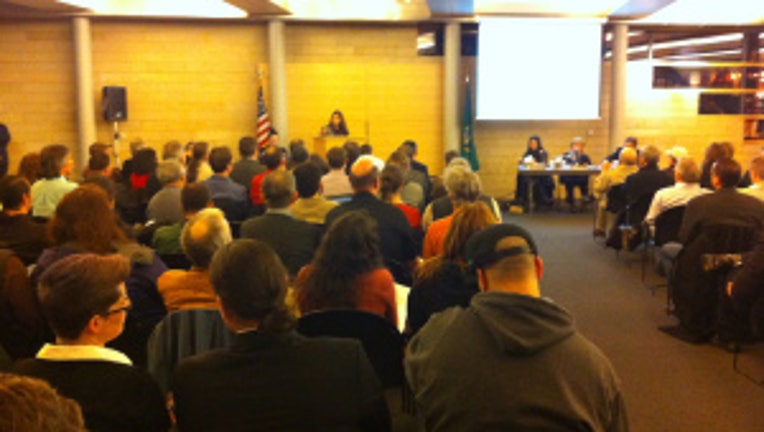 SEATTLE -- Hundreds of people packed Seattle City Hall Thursday night for a state Liquor Control Board public forum to ask questions or offer advice on restrictions and rules needed to carry out the state-sponsored growing, distribution and selling of marijuana under the new pot law.

It’s was the second of what was to be six public forms held by the board. The first forum in Olympia earlier this week was so crowded that board members said they would likely add more forums so that everyone would get a chance to ask questions.

In Seattle Thursday night, the crowd was so large the board had to open up an upstairs room.

The board has made no decisions on rules and regulations yet, as the measure legalizing the recreational use of marijuana was only approved by voters in the Nov. 6 election. And there are plenty of questions to address and issues to consider.

For example, what kind of qualifications will the state be looking for when it comes to producers, processors and retailers? Will a past drug conviction or any type of criminal record automatically bar someone from getting involved in the legal marijuana industry?

Financing is another issue. Federally insured banks fear possible charges of drug money laundering if they allow accounts to be opened for an industry that is not legal under federal law.

"I represent five or six small medical marijuana growers,” said one man who addressed the board in Seattle. “Don’t leave us out; we want to bring in our expertise."

The Washington state board is in uncharted territory.

"You don’t want so much (marijuana) produced with an abundance left over, because it’s a commodity," said Liquor Control Board spokesman Brian Smith.

The board members will consult with experts to figure out the likely demand for pot for each geographical area in the state before the licensing begins, he said.

The state is slated to issue licenses for pot growers by August and the first retailers could be setting up shop by December.

"Don’t forget the little guys, the 'mom and pops' are going to make a difference," a potential grower told the board.

But with many banks not willing to play ball, the pot business could be more of a fantasy than reality for the little guys.  "The banks won’t accept deposits and do business with them because it’s illegal under federal law," said Smith.

But that’s not scaring many people away. One man followed the green rush to Seattle all the way from Miami Beach.

"We are going to be the Philip Morris of marijuana,” Brian Laoruangroch of Miami Beach said. “We’re going to offer the highest quality product."

Laoruangroch said he believes in his dream so much that he plans to move to Seattle permanently.

"I’m certainly curious; it would be interesting to see if there is profit in the business," said Marques Warren.

But one businesswoman said the profits wouldn’t be enough to compete with the black market.  She’s been crunching the numbers and the biggest deterrent for her is the state’s 25 percent tax.

"It makes it very challenging to make it profitable enough to take the challenge and liability," said Shawn Eddy.

The Liquor Control Board hopes to have its final rules and regulations in place by June.

The American Civil Liberties Union-Washington would like to small businesses, not big corporations, getting a piece of the new industry.

Smith, of the Washington Liquor Control Board ,said the public hearings might be completed by the end of February, a final plan for rules and regulations could be in place by June and licenses could be issued by mid-August. By Dec. 1, the first retailers could be selling legal marijuana throughout Washington state.