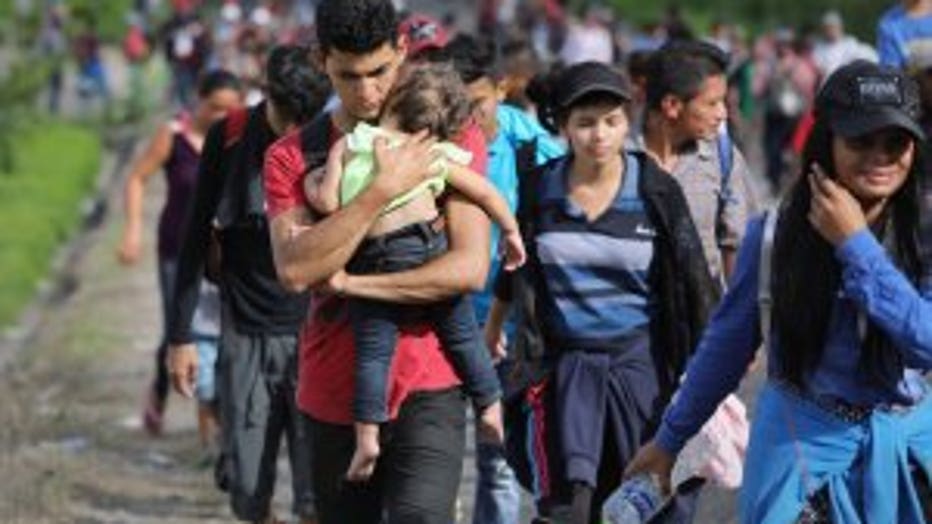 MEXICO CITY -- About 500 Central American migrants headed out of Mexico City on Friday to embark on the longest and most dangerous leg of their journey to the U.S. border, while thousands more were waiting one more day at a massive improvised shelter.

The group that got a head start bundled their few possessions and started off, taking a subway to the north part of the city and then hiking down an expressway with a police escort.

For many, it was the first time they had ever been in a metro system, and they had little knowledge of the city or the 1,740 mile (2,800 kilometer) route to Tijuana that lay ahead of them.

Carlos Castanaza, a 29-year-old plumber from Guatemala City, wrapped himself from head to toe in a blanket against the cold and asked bystanders where the first toll booth was. When told it was in a town about 20 miles (30 kilometers) away, he carefully wrote the name of the town on his hand with a pen to remember where he was going.

Deported for driving without a license after a decade working in Connecticut, Castanaza was desperate to get back to his two U.S.-born children. "I've been wanting to get back for more than a year, but I couldn't until the caravan came through," said Castanaza. "That's why I joined the caravan."

The advanced group hoped to reach the north-central city of Queretaro, about 105 miles (170 kilometers) to the northwest, by nightfall.

Meanwhile, another 4,000 to 5,000 migrants milled around the massive shelter improvised at a Mexico City sports complex, impatient to leave.

"Let's go, let's go!" shouted Eddy Rivera, 37, a rail-thin migrant from Honduras who said he couldn't take staying in the camp any longer. "We are all sick, from the humidity and the cold," said Rivera, who left behind four children and a wife in Honduras. "We have to get going, we have to get to Tijuana."

Though he was unsure how an unskilled farmworker like himself would be allowed in the United States, he had a simple dream: earn enough money to build a little house for his family back in Puerto Cortes, Honduras.

Thousands of migrants have spent the past few days resting, receiving medical attention and debating how to proceed with their arduous trek through Central America and Mexico which began in mid-October. On Thursday, caravan representatives met with officials from the local United Nations office and demanded buses to take them to the border, saying the trek would be too hard and dangerous for walking and hitchhiking.

Caravan coordinator Milton Benitez said officials had offered them buses for women and children but organizers demanded that they be for everyone. U.N. representatives could not be immediately reached to confirm. By Friday, the migrants said they were so angry at the U.N.'s lack of help that they no longer wanted U.N. observers with the caravan.

They also made a big point of sticking together, their only form of self-protection.

Felix Rodriguez, 35, of Choluteca, Honduras had been at the Mexico City sports complex for more than a week.

"We all want to get moving," he said. But he was waiting for the main group to leave Saturday, noting "it is better to leave in a group, because leaving in small bunches is dangerous."

Mexico City is more than 600 miles from the nearest U.S. border crossing at McAllen, Texas, but the area around the Mexican border cities of Reynosa, Matamoros and Nuevo Laredo is so rife with drug gangs that the migrants consider it too dangerous to risk.

A previous caravan in the spring opted for the longer route to Tijuana in the far northwest, across from San Diego. That caravan steadily dwindled to only about 200 people by the time it reached the border.

"California is the longest route but is the best border, while Texas is the closest but the worst" border, said Jose Luis Fuentes of the National Lawyers Guild.

Mexico has offered refuge, asylum or work visas to the migrants, and its government said 2,697 temporary visas had been issued to individuals and families to cover them while they wait for the 45-day application process for a more permanent status. On Wednesday, a bus left from Mexico City to return 37 people to their countries of origin.

But many want to continue on toward the United States.

Authorities say most have refused offers to stay in Mexico, and only a small number have agreed to return to their home countries. About 85 percent of the migrants are from Honduras, while others are from the Central American countries of Guatemala, El Salvador and Nicaragua.