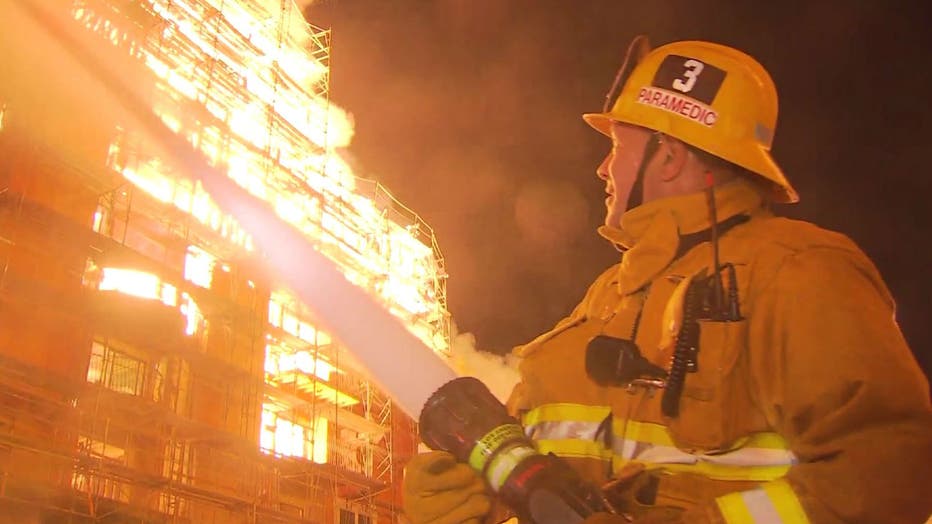 
A 911 caller reported the first fire at 906 N. Fremont Ave. just before 1:30 a.m. The location was directly across the street from a fire station.

"More than two-thirds of (the building) was on fire, causing significant exposure issues for two nearby high-rise buildings," he added.

It took 250 firefighters to get the massive blaze under control.

CNN iReporter Andrew Gottesman lives close to the scene. He told CNN he saw the fire from his window and it "seemed incredibly large."

Gottesman described the inferno as scary sight. "It was incredibly nerve racking being so close, and I actually was expecting to have to evacuate my building."

"The cause is under investigation, and the loss is being tabulated. We estimate that it will be in the multimillion-dollars of loss range," Terrazas said.

The second fire was reported in a smaller apartment building about eight blocks away on West Seventh Street just after 4 a.m.

Fire officials don't know whether the blazes are related, but it took 100 firefighters to get the second fire under control

The fires also caused traffic headaches. Parts of the 110 and 101 freeways were closed as fire crews battled the flames.


CNN's Joe Sutton and Josh Levs contributed to this report.