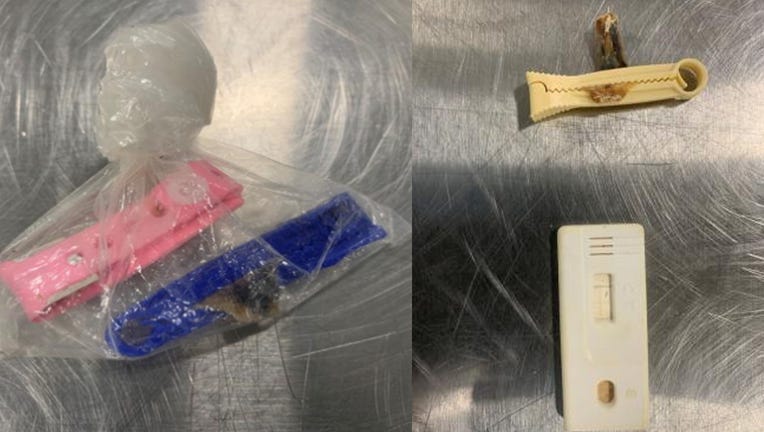 A passenger arrived on a Spirit flight from Honduras on Aug. 2 at Louis Armstrong New Orleans International Airport, according to U.S. Customs and Border Protection. The person was referred for a secondary inspection, which is when the agency’s agriculture specialists — who work with specialized X-ray machines to detect organic materials at international airports — made the discovery.

When questioned, the passenger claimed it belonged to a relative, CBP said.

Customs agents contacted the U.S. Centers for Disease Control and Prevention in Houston, which advised that the umbilical cord and a medical wrist band accompanying "could be abandoned or detained." The passenger chose to leave the items behind, and they were incinerated, the statement said.

After a baby is born, the umbilical cord is cut and a small amount of cord remains attached to the newborn’s belly button, known as the "cord stump." Over the next week to two, the stump eventually dries out and falls off on its own.

Generally, the stump is disposed of, but some parents say they opt to keep it, citing sentimental reasons. In Japan, a portion of the umbilical cord is commonly saved in a traditional box, according to the Japan Times.

Further details about the traveler in New Orleans who claimed it belonged to a relative were not released. But this was not the first time this summer that part of a human umbilical cord was found in luggage at the same airport.

What to do if your flight is canceled?

Travel expert Brian Kelly says flight cancellations are consistently happening. He shares tips on tracking your flight and what to do if it is canceled?

On June 28, a passenger on the same recurring flight from Honduras was referred for a secondary inspection. An X-ray revealed "an item packed in the middle of T-shirts sealed in cellophane," CBP said in the statement. Officials found a small pouch containing "clothing, paperwork, a positive pregnancy test, and an unknown tissue sample."

The passenger was then questioned about the items "and initially was unsure what they were, before ultimately declaring them as a human umbilical cord and positive pregnancy test belonging to a relative," the statement said.

"With the vast number of daily travelers, our officers are guaranteed to encounter some unusual items," Mark Choina, CBP acting area port director of New Orleans, said in the statement. "However, two umbilical cords, a month apart, coming from the same country is noteworthy."

Choina said the seizures of human umbilical cords highlight "the importance of knowing what is in your bag, and if you can legally import it, especially if you are transporting it for someone else."

The U.S. CDC requires a permit or certification for certain biological materials to be brought into the United States. Last year, CBP discovered 264 "pests" at ports of entry, which are materials identified as being dangerous to the health of U.S. agricultural resources. Another 2,548 materials were quarantined, including plants, meat, animal byproduct, and soil, officials said.

RELATED: Why now is the best time to book holiday air travel