NEW HOPE, Pa. (AP) — Authorities have found human remains in their search for four missing young Pennsylvania men and have identified one victim, a district attorney said in a middle-of-the night briefing.

Bucks County District Attorney Matthew Weintraub said early Thursday morning that one set of remains was identified as 19-year-old Dean Finocchiaro. Other remains were found on a sprawling farm in suburban Philadelphia but they still needed to be identified, he said. 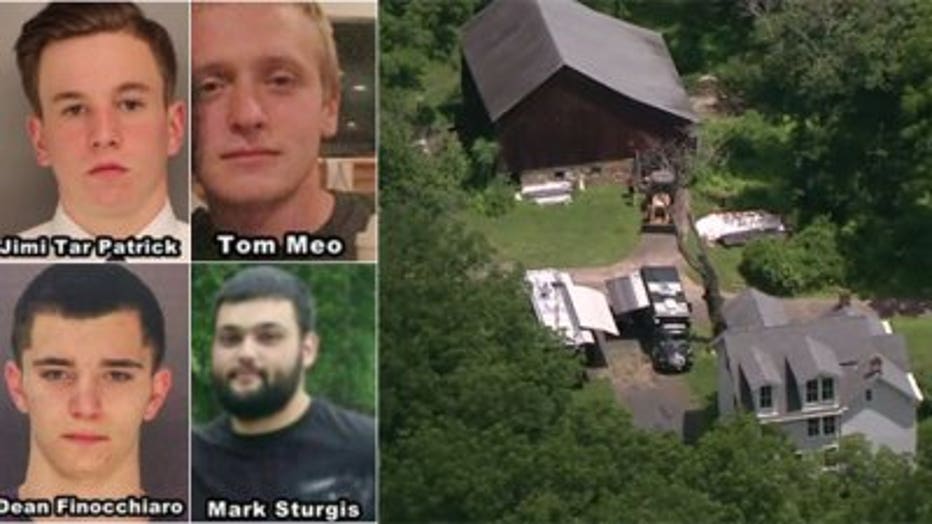 Authorities arrested the son of the property's owners, 20-year-old Cosmo DiNardo, earlier on Wednesday on charges he tried to sell one of the missing men's cars a day after he was last seen. A judge ordered him held on $5 million bail.

ADDITIONAL REMAINS – _WE_RE NOT DONE YET

ADDITIONAL REMAINS - _WE_RE NOT DONE YET

DiNardo was described as a person of interest in the investigation after he was first arrested on Monday on an unrelated gun charge. His father put up $100,000 to bail him out on Tuesday.

DiNardo's parents, Antonio and Sandra DiNardo, own the 90-acre (36-hectare) farm in upper Bucks County, a bucolic area with rolling hillsides, new housing developments and historic sites. They also own a nearby farm parcel that was also searched and a concrete company near their home in Bensalem, closer to Philadelphia.

An attorney representing the couple issued a statement on Wednesday saying they sympathize with the families of the missing men and are cooperating "in every way possible with the investigation."

The FBI has been using heavy equipment to dig a deep ditch on the farm property, and then sifting through each bucket of dirt by hand.

Earlier Wednesday, Weintraub said police would "continue digging and searching that property until we're satisfied that they are not there."

"This is just really, really rough on everybody involved because of the heat, the magnitude, the scope — and the stakes are incredibly high, life and death," he said.

At least some of the missing men are friends, but it's unclear how well they knew DiNardo, if at all. Online records suggest he attended the same Catholic high school as Patrick but was a year ahead.

In the February gun charge he still faces, DiNardo is accused of illegally being in possession of a shotgun and ammunition because of a previous involuntary commitment to a mental health institution. An affidavit in that case said he is "known to be suffering from mental illness."

His social media posts suggest an avid interest in hunting, fishing and Air Jordan sneakers, which he appeared to sell online. He had enrolled in a nearby college at one point as a commuter student, with hopes of studying abroad in Italy, according to an article on the college website. He had a few other brushes with the law since turning 18 over traffic violations and other minor infractions.