SAN DIEGO - Show up at a border crossing with Mexico and ask a U.S. official for asylum? Sign up online? Go to a U.S. embassy or consulate?

The Biden administration has been conspicuously silent about how migrants should enter the United States when Trump-era asylum limits end, fueling rumors, confusion and doubts about the government's readiness despite more than two years to prepare.

"I absolutely wish that we had more information to share with folks," said Kate Clark, senior director for immigration services at Jewish Family Service of San Diego, which has facilitated travel within the United States for more than 110,000 migrants released from custody since October 2018.

Migrants have been denied rights to seek asylum under U.S. and international law 2.5 million times since March 2020 on grounds of preventing COVID-19 under a public-health rule that was scheduled to expire Wednesday until U.S. Supreme Court Chief Justice John Roberts ordered a temporary hold. Title 42 has been applied disproportionately to those from countries that Mexico agrees to take back: Guatemala, Honduras, El Salvador and more recently Venezuela, in addition to Mexico. People from those countries are expected to drive an anticipated increase in asylum claims once the rule is lifted.

Many expect the government to use CBPOne, an online platform for appointment registration that was introduced in 2020. The U.S. Customs and Border Protection mobile app has had limited use for people applying for travel permits and for those tracking U.S. immigration court hearings under the now-defunct "Remain in Mexico" policy.

It's expected migrants using the app would make appointments to seek asylum in the United States, but would have to remain outside the country until their slotted time and date.

CBPOne, which some advocacy groups oppose over data privacy concerns, may be impractical for migrants without internet access or language skills. The agency also must get the word out.

Nicolas Palazzo, an attorney with Las Americas Immigrant Advocacy Center in El Paso, Texas, said he worries scammers will charge migrants to sign them up and that CBP's limited processing capacity will result in intolerable waits. 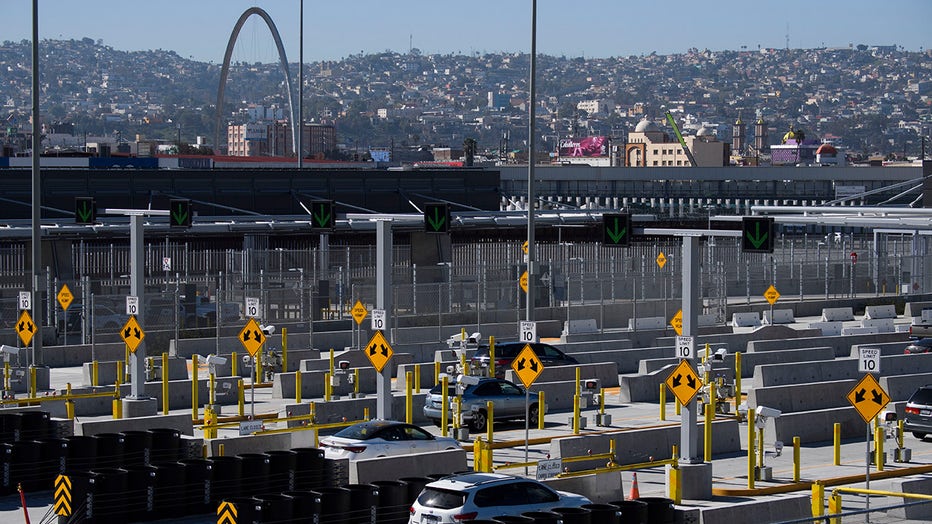 Vehicles enter a border checkpoint as they approach the Mexico border at the US Customs and Border Protection (CBP) San Ysidro Port of Entry at the US Mexico border on February 19, 2021 in San Diego, California. - The Biden administration plans to sl

"Unless they plan to ramp that up significantly, someone applying for admission on CBPOne is going to be given a date that is like a year out," Palazzo said. "Realistically, can they tell me with a straight face that they expect people to wait that long?"

Mohamad Reza Taran, 56, left Iran on Nov. 26 after converting to Christianity and flew to Tijuana, Mexico, where U.S. border inspectors at a San Diego crossing turned him away when he asked for asylum.

The computer technician planned to wait to see if he would get in immediately after Title 42 is lifted and, if not, said he would cross the border illegally, perhaps by climbing the border wall in San Diego or walking across flat desert in Yuma, Arizona. He has family in Los Angeles and sees the United States as his only option.

"I have nothing here," Taran said in an interview outside a church in Tijuana, where he was searching for people who could instruct him on U.S. policies.

U.S. Rep. Henry Cuellar, a Texas Democrat, said CBP officials told him last week they hoped to funnel asylum-seekers through official crossings and turn back to Mexico anyone who crosses the border illegally to the greatest possible extent. Doing so would likely be challenged in court because asylum law says people who enter illegally are entitled to seek protection.

No one disputes that the Border Patrol is woefully ill-equipped for processing — even while Title 42 kept a lid on numbers.

The Border Patrol paroled nearly 450,000 migrants in the United States through October — including 68,837 in October and 95,191 in September — sparing its agents the time-consuming work of issuing orders to appear in immigration court. According to a Government Accountability Office report, it typically takes at least two hours to prepare a court case, compared to a half-hour to release someone on parole.

Migrants paroled by Border Patrol agents are allowed to move freely within the United States and told to report to an U.S. Immigration and Customs Enforcement offices at their final destinations, typically in two months.

The GAO report, released in September, details how the processing work dumped on ICE has hamstrung employees. As of March, ICE scheduled 15,100 appointments for families to complete processing as far out as March 2024. One ICE office reported up to 500 people a day showing up in person, most without appointments.

After families get a court appearance, they contend with a court system that is backlogged by more than 2 million cases, resulting in waits of several years for judges to reach decisions.

Online registration using CBPOne would be "antithetical to the whole concept of asylum" because it could force people to wait in unsafe places, said Melissa Crow, litigation director for the Center for Gender & Refugee Studies at the University of California Hastings College of the Law.

Crow and others believe CBP could process far more people than they have been.

Earlier this year, the agency processed up to about 1,000 Ukrainians a day at San Diego’s San Ysidro border crossing, about three times its custody capacity.

Since the pandemic, migrants released in San Diego have been housed in motels until leaving, usually on a flight to family and friends east of the Mississippi River, Clark said. To prepare for the end of Title 42, Jewish Family Service opened a building for families to snack, watch television and play in a courtyard after they book travel, freeing up motel rooms for new arrivals. Clark likens it to an "airport lounge."

CBP has been releasing more migrants to Jewish Family Service through exemptions to the asylum limits — about 200 to 250 a day, Clark said. Others are housed by the Catholic Charities Diocese of San Diego.

"It’s a day we’ve been working toward for some time," Clark said Monday, having heard nothing from CBP about how migrants will be processed after asylum limits end. She anticipates more releases but doesn’t know how many.