WASHINGTON (AP) - Kevin McCarthy is set to face a case of deja vu come Tuesday. The political future of the 57-year-old will once again be at stake as Republican lawmakers decide if he should be elected as House speaker.

It’s a journey the California lawmaker took once before in 2015, fruitlessly, facing the same opposition from the right flank of the party he is expected to meet this week. His first speakership run came when then-House Speaker John Boehner, R-Ohio, resigned after an internal party battle with members of the ultra-conservative House Freedom Caucus.

More than seven years later, he is the party’s nominee for speaker after leading the Republican Party to a slim majority in the November midterm elections. He secured the support of most of the conference during a closed-door leadership vote shortly after and overcame a challenge from Rep. Andy Biggs, R-Ariz.

While McCarthy is as of now facing no serious Republican challenger for the constitutionally mandated office, which would make him second in line to the presidency, his ascension to speaker is an open question. He is facing entrenched opposition from a small number of conservative lawmakers who in a 222-213 majority could well tank his nomination.

Here’s what you need to know about how the House elects a speaker: 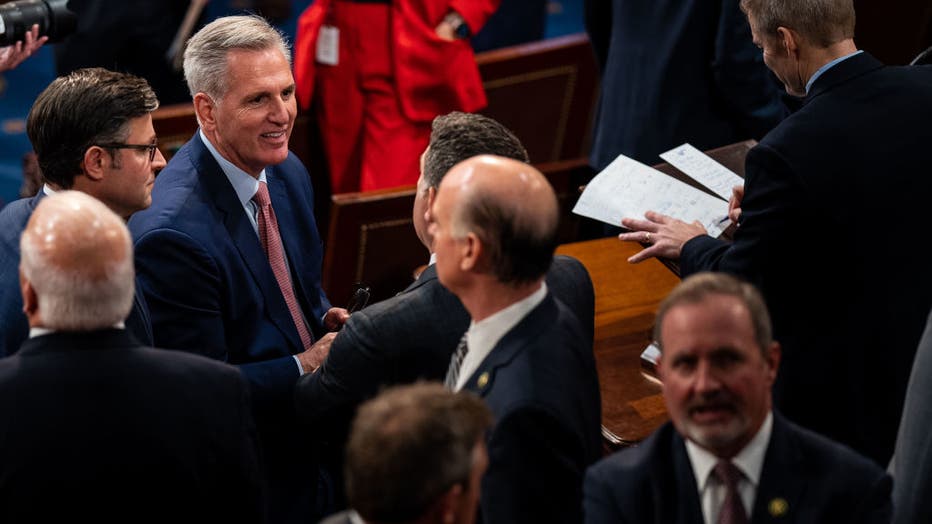 WASHINGTON, DC - JANUARY 03: Rep. Kevin McCarthy (R-CA) in the House Chamber of the U.S. Capitol Building on Tuesday, Jan. 3, 2023 in Washington, DC. Today members of the 118th Congress will be sworn in and the House of Representatives will hold vote

NO HOUSE WITHOUT A SPEAKER

Choosing a speaker will be the first vote the House will take before new and returning lawmakers are even sworn into office on Tuesday. As set out under the Constitution, the session will begin at noon on Jan. 3, with all the lawmakers seated on the House floor and members from both parties joining in the vote for speaker.

The chamber cannot organize until it has a speaker since that person effectively serves as the House’s presiding officer and the institution’s administrative head. The House can elect a new speaker at any time if the person occupying that role dies, resigns or is removed from office. Barring that, a speaker is normally elected at the start of a new Congress.

Lawmakers call out the name of their choice for speaker from the floor, a rare and time-consuming roll call that heightens the drama on the floor. Members often liven up the proceedings by shouting or standing when casting their vote.

WHO CAN BE NOMINATED?

In the weeks after an election, the Republican conference and the Democratic caucus hold an informal vote among their members to decide who they want to nominate to lead their party in January. McCarthy won the majority of the Republican vote in a closed-door November meeting. Weeks later, Democrats unanimously chose Rep. Hakeem Jeffries, D-N.Y., to become their leader as the party transitions into the minority.

But, once Jan. 3 comes along, members are not obligated to vote for the party’s chosen candidate. While it has been the tradition for the speaker candidate to be a member of the House, it is not required. In past years, President Joe Biden, former President Donald Trump and even a senator, Republican Rand Paul of Kentucky, have received votes for House speaker.

To be sure, none of them received the majority of the vote.

Once the House is in a quorum — meaning the minimum number of members are present to proceed — the speaker nominee from each party will be read aloud by the respective leaders before a roll call vote to elect a new speaker. The clerk then appoints lawmakers from each party as tellers to tally the votes.

The candidate to become speaker needs a majority of the votes from House members who are present and voting.

Historically, the magical number has been 218 out of the 435 members of the House. But many previous speakers, including outgoing Speaker Nancy Pelosi, have ascended to the dais with fewer votes than that, as some members voted present instead of calling out a name. Every lawmaker voting "present" lowers the overall tally needed to reach a majority.

Many are skeptical that McCarthy will reach a majority to become speaker on the first ballot. Should he come up short, it is likely the clerk will repeat the roll call vote several times until he is able to garner a majority. McCarthy is expected to be making concessions and compromises with the holdouts until the moment he is able to grasp the gavel.

PASSING OF THE GAVEL

Once a speaker candidate won a majority of the vote, the clerk will announce the results of the election.

A bipartisan committee, usually consisting of members from the home state of the chosen candidate, will then escort the speaker-elect to the chair on the dais where the oath of office is administered. The oath is identical to the one new members will take once a speaker is chosen.

The outgoing speaker will usually join the successor at the speaker’s chair, where they will pass the gavel as a nod to the peaceful transition of power from one party leader to another. This time around, that will be Pelosi, the California Democrat who held the gavel for the last four years.