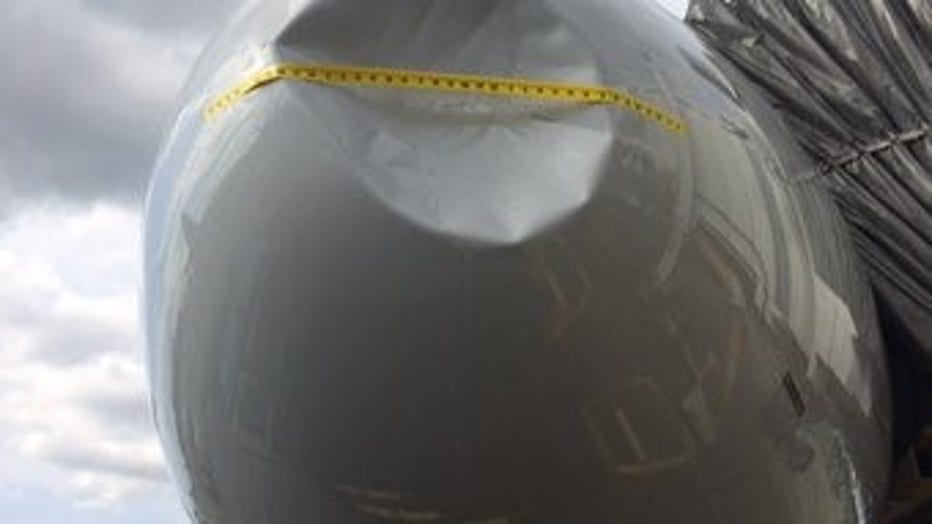 This is a close-up of the dent left in the nose of the American Airlines jetliner that sustained a bird strike on takeoff at Sea-Tac. (Photo: Sea-Tac Airport)

SEATAC, Wash. -- American Airlines Flight 2310, en route from Seattle to Dallas/Fort Worth, on Wednesday was forced to return to Sea-Tac International Airport after a bird strike on takeoff, the airline said.

An American Airlines spokesman told Q13 News that the bird -- or possibly two or more birds -- struck the nose of the plane on takeoff, and a large dent in the nose was clearly visible upon the aircraft's landing. No one was injured.

The airline said there were 150 passengers and six crew members on aboard the Airbus A321.

"Our maintenance team is currently evaluating the aircraft," the airline said. "We apologize to our customers for the inconvenience, and are working to get them to Texas as soon as possible."

The airline later said that they had decided to swap out the aircraft, and that the new plane would be leaving Sea-Tac for Dallas/Fort Worth at 6:50 p.m.