SEATTLE -- A Rolling Stone Magazine article is causing buzz on-line about climate change. It uses the raging wildfire in Western Washington's wettest rainforest on the Olympic Peninsula as just one of several examples of the many changes we're seeing around the globe when it comes to climate change.

And some places are going to see more rapid changes than others, says Atmospheric Sciences Professor Cliff Mass at University of Washington. I

n a 2014 radio interview, Dr. Mass said "Climate change is not going to be constant over the whole globe," says Mass. "There are certain areas where things are going to degrade a lot, but there will be places like here which will maintain a pretty high quality of life."

For a long time climate scientists have been warning that all over we'd be seeing warm spells become warmer, heat waves would last longer, cold snaps would be more frigid, storms fueled by more moisture and heat in the atmosphere would be stronger, when it rained it would rain longer and harder than before.

The reason behind it all is a theory called the 'lazy' jet stream. First you have to know how the jet stream used to work-- and why it looks like it's behaving differently now. 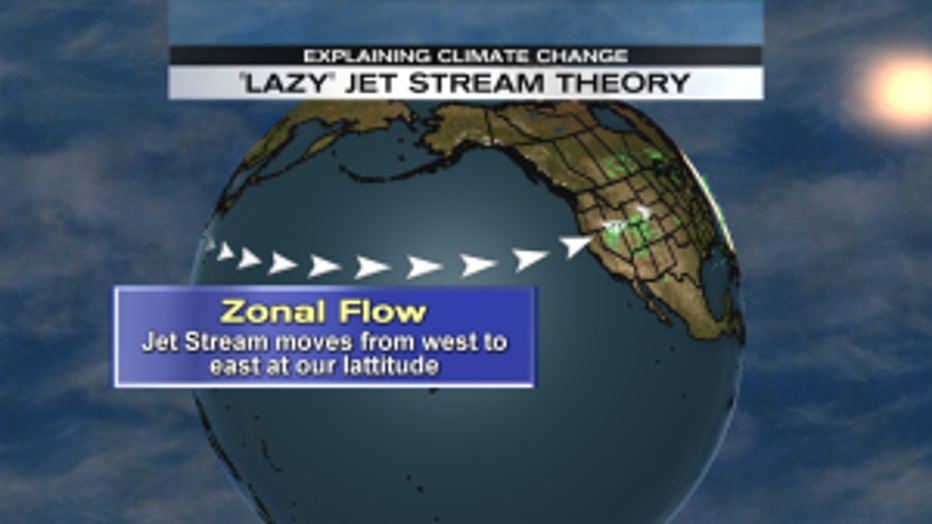 The jet stream is a river of fast moving air at the upper-most part of the atmosphere. It steers storms and moves weather patterns across the globe.

There are two basic patterns the jet stream takes: zonal  and ridge/trough. On our part of the planet, a zonal flow means that we see weather systems and storms moving from west to east.

That usually means mild and seasonal weather for our region. The other pattern is a ridge/trough. If it looks like a roller coaster to you-- that's not too terrible of an analogy. 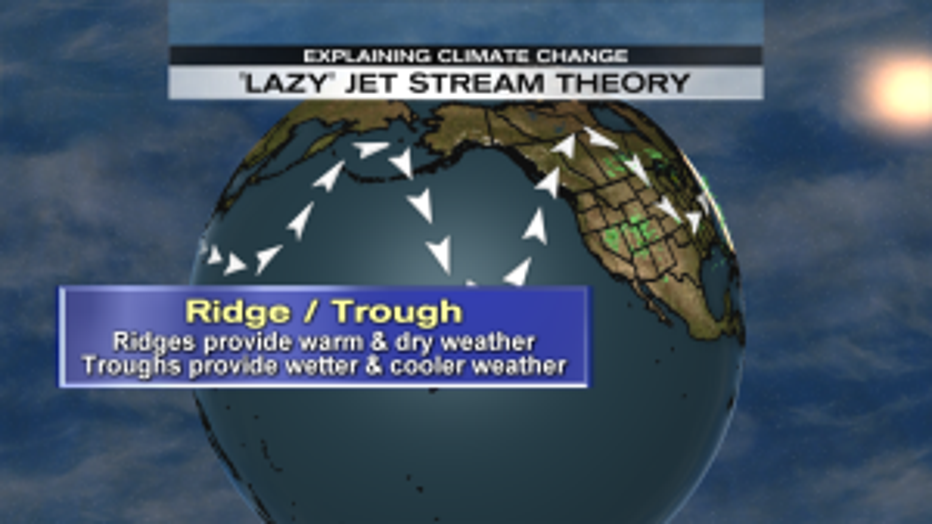 When the jet stream goes up (ridge) we see warm and dry weather. When the jet stream takes dip (trough) we see cooler and wetter weather. In the last 5-10 years-- we've seen very little zonal flow. And we've been seeing a lot the ridge/trough pattern. Why is that? The answer is: differential heating. It sounds fancy, but it's not. It simply means differences in heat. 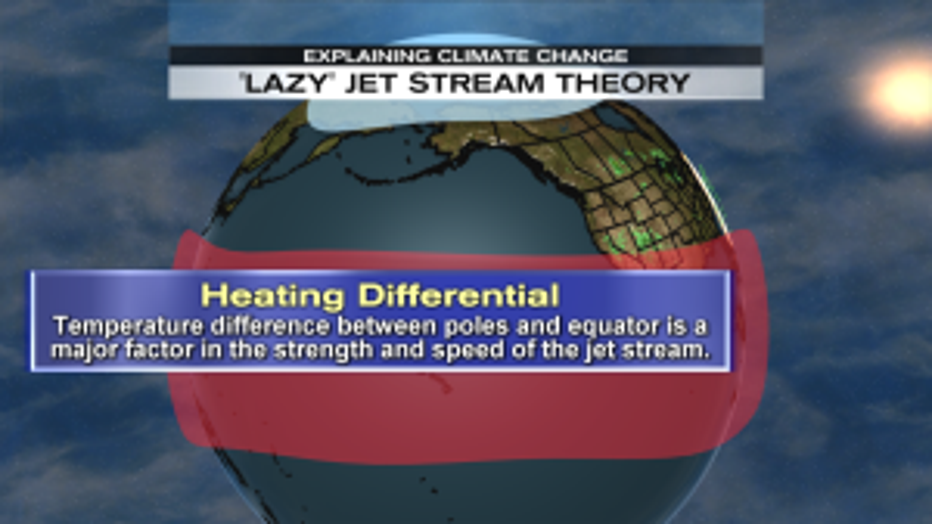 Your oven versus your freezer.

The regions of Earth near the equator are the stove. They face the sun all the time: days are always 12 hours, night is 12 hours. The poles are the Earth's freezer. They face the sun 24 hours a day during their summer, they are dark 24 hours a day in their winter. The difference between the equator and the poles keeps the jet stream energized and moving-- and moves weather systems through. 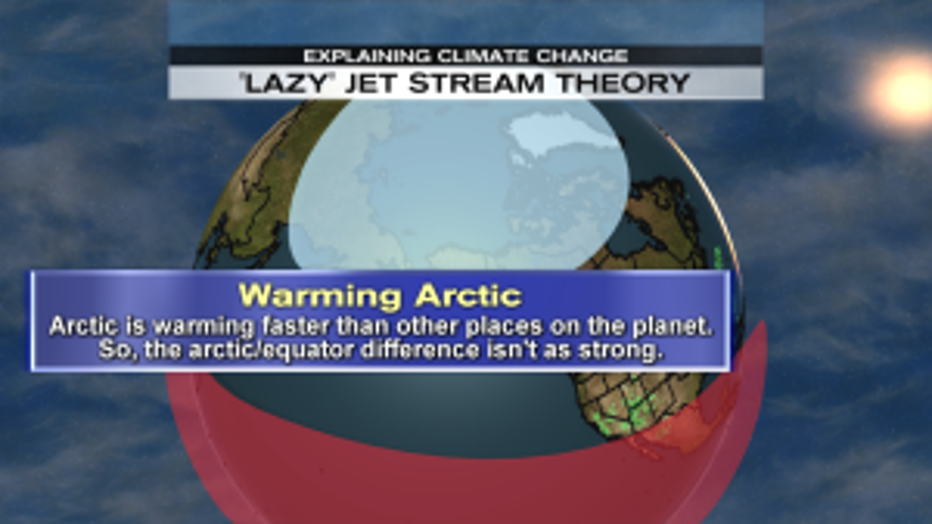 But the Arctic is warming faster than other places on the planet. We're seeing glaciers retreat and the summer ice coverage in the Arctic Ocean getting thinner and more sporadic. What happens when the temperature difference isn't as big anymore between the top of the planet and the middle?

The jet stream is slower, more sluggish. When a river of water slows down when it reaches the ocean-- it slows down and bunches up on itself in a meandering pattern. Look at any map, even the mighty Mississippi River is full of meandering when it gets towards the Gulf of Mexico.

We are seeing that with the river of air. The jet stream is having far more of these ridge/trough patterns. It looks more like a roller coaster. And that's what it feels like to us living at the surface.

Even though we stay in place, the weather above us flips and flops from one extreme to another. Weather that's hotter than normal, followed by colder than normal. And a weather pattern that used to last for a few days-- now lasts for a few weeks. Without climate change, we would have likely had a June heat wave in Western Washington. Ten years ago this weather pattern might have lasted about 3-4 days. But, our June 2015 heat wave lasted almost two weeks. Weather patterns get "stuck" in place and persistence takes over.

That's the same thing happening over and over again. Ask the people in Boston digging out from all the snow after storm after storm last winter when the atmospheric conditions just stayed the same for weeks on end. 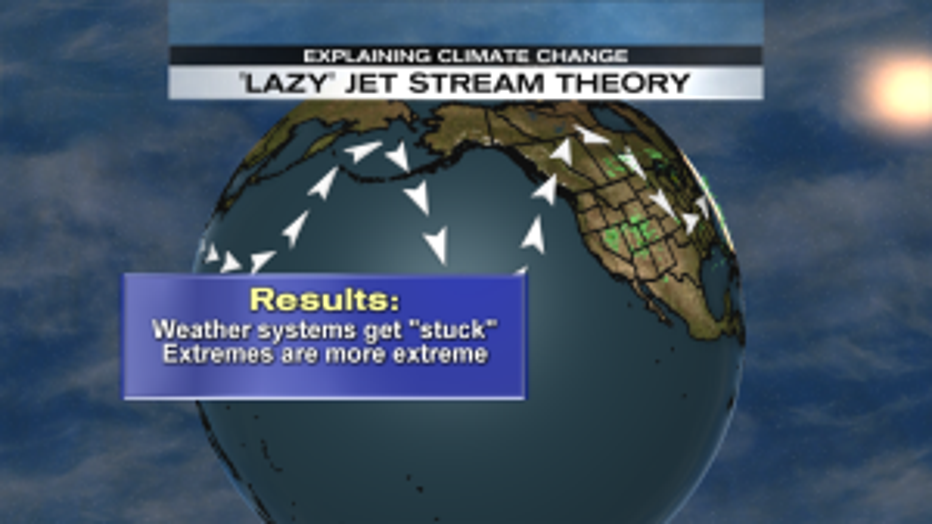 We're already seeing some impacts from this shift in the jet stream here in the Pacific Northwest-- and the list is already quite extensive. But Dr. Mass says we're actually in a pretty lucky spot on planet Earth.

"The big picture thing to keep in mind is we're downstream of the Pacific Ocean and the way that climate works is that the Eastern Pacific Ocean will probably warm up more slowly and to a lesser degree than almost any other place on the planet," says Mass to KIRO radio.

"Our weather is controlled by the Pacific, so our temperatures will not change very rapidly because of the Pacific Ocean, and our snow pack will hold around for awhile because of the Pacific." But, this year we've already seen some dramatic shifts with hotter and drier than we've ever been in the Pacific Northwest. At least, in records that go back to 1894 for Seattle. July of 2015 was our hottest month ever on record in Seattle. And when we do seem to see rain-- we are often setting one-day record rainfall.

And while our rainiest months used to be December and January-- that's changing too. 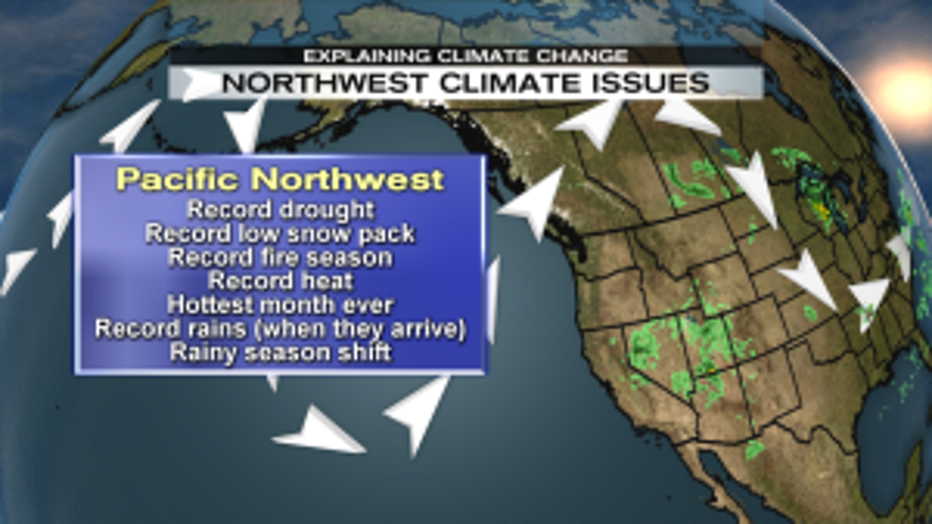 Our wettest months seem to be transforming to October, March and April.  Many factors beyond climate change like the El Nino/La Nina shifts (sometimes called Southern Oscillation, abbreviated ENSO for short) are major players too.

And these are long range weather pattern shifts we really don't have a handle on fully understanding since we've only been observing them for a few decades now.

The bottom-line remains that climate change, or "weather weirding" as I like to call it, is already here in some small doses. The debate, of course, rages in some political circles on about whether this is man-made climate change or natural variability. But, for nearly every climate scientist-- the verdict is in. 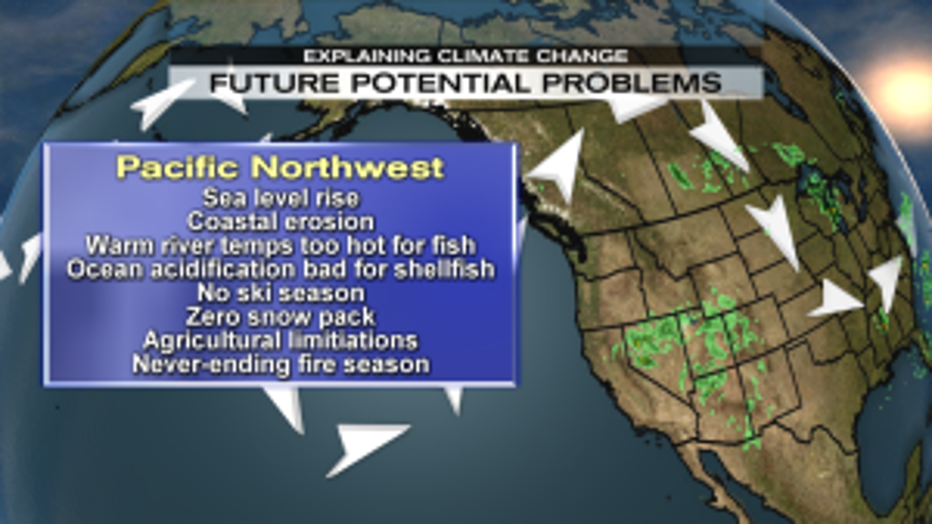 And there are more potential troubles ahead for our region including our ability to harvest shellfish, keep salmon alive or grow apples.