According to the Seattle Fire Department (SFD), just after 11:00 p.m., crews responded to a houseboat on fire docked near China Harbor Restaurant on Westlake Ave. N. The Seattle Police Department's Harbor Patrol unit was also dispatched to the scene.

Officials say no one was hurt, but the three additional boats did get caught up in the fire.

A neighbor told FOX 13 News he spotted the flames and called for help.

"I went up to the upper deck to grab a soda from the upstairs fridge and I see that my neighbor's houseboat is, the top floor is engulfed in flames," neighbor Patrick Christell said.

The flames were so large they could be seen on our FOX 13 Weather cameras.

"I dialed 911 and go to my neighbor's boat, my neighbor, Sam, knock on his door to say it's time to go. Unplug my power from my boat and turn off my DC power inside the boat, unplug his boat and then we sort of just walk out of the marina and the 911 operator told me the fire brigade was very close and so we could hear the sirens but in the time I did all that, the whole boat went up," Christell said.

Traffic was even diverted, so fire crews could get to work. Officials say the fire was extinguished an hour and a half after it was initially reported. 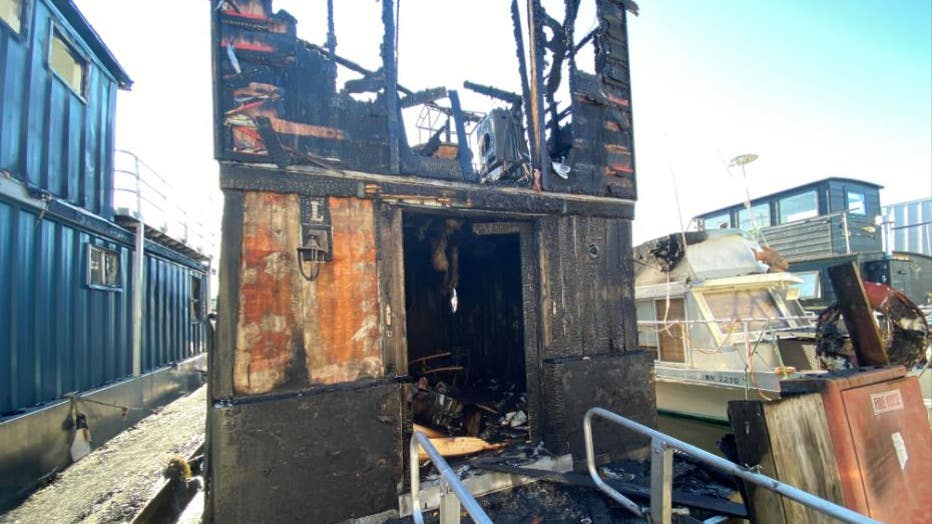 SFD's David Cuerpo said the houseboat at the center of the investigation has been deemed unlivable.

The damage appeared significant in a photo shared by SFD on Twitter.

Luckily, Cuerpo said no one was hurt, and the other boats only sustained some damage.

"The key thing that was a challenge for firefighters when it comes to any type of marina fire is access to the fire. So, that's one of the reasons why we encourage all residents on a boat or a houseboat to quickly evacuate to allow us the capacity to get on to the dock," Cuerpo told FOX 13 News.

Investigators said these fires are a reminder to always turn off cooking devices and have an escape plan and personal flotation devices in the event of a fire, no matter what kind of boat you are on.

They said this can all happen in a flash, and that is something Christell saw for himself.

"It probably took two minutes for, it was a two-story house barge, and it started in the upper floor, the bedroom level there, and yeah, in the two minutes it took me to rally my neighbor and figure out what was going on, the whole thing was up," he said.

Some of them even found ash on their cars from overnight.

SFD investigators are still pinpointing an exact cause of the fire.

This is a developing story and new details will be provided as soon as they become available.