WASHINGTON (AP) - A new committee to investigate the Jan. 6 insurrection at the U.S. Capitol would have 13 members and the power to subpoena witnesses, according to legislation released by House Speaker Nancy Pelosi. The House is expected to vote on the bill this week.

The effort comes after Senate Republicans blocked the formation of an independent, bipartisan commission to probe the attack, in which hundreds of former President Donald Trump’s supporters violently broke into the Capitol and interrupted the certification of President Joe Biden’s victory.

The new, partisan House panel would have eight members appointed by Pelosi and five appointed "after consultation with" Republican Leader Kevin McCarthy. A Pelosi aide said the speaker is considering including a Republican among her appointments, which would bring the likely partisan split to 7-6. The aide was granted anonymity to discuss her thinking.

Pelosi said in a statement Monday that Jan. 6 was "one of the darkest days in our nation’s history" and that the committee will seek the truth about it.

"The Select Committee will investigate and report upon the facts and causes of the attack and report recommendations for preventing any future assault," she said.

Many Republicans were concerned about such a partisan probe, since majority Democrats are likely to investigate Trump’s role in the siege and the right wing groups that were present for it. Almost three dozen House Republicans voted to create an independent panel, which would have had an even partisan split among members. Seven Republicans in the Senate supported moving forward on that bill, but that was short of the 10 Senate Republicans who would be necessary to pass it.

As laid out in Pelosi’s legislation, the new select committee would have subpoena power and no specific end date. The panel can issue interim reports as it conducts the probe. 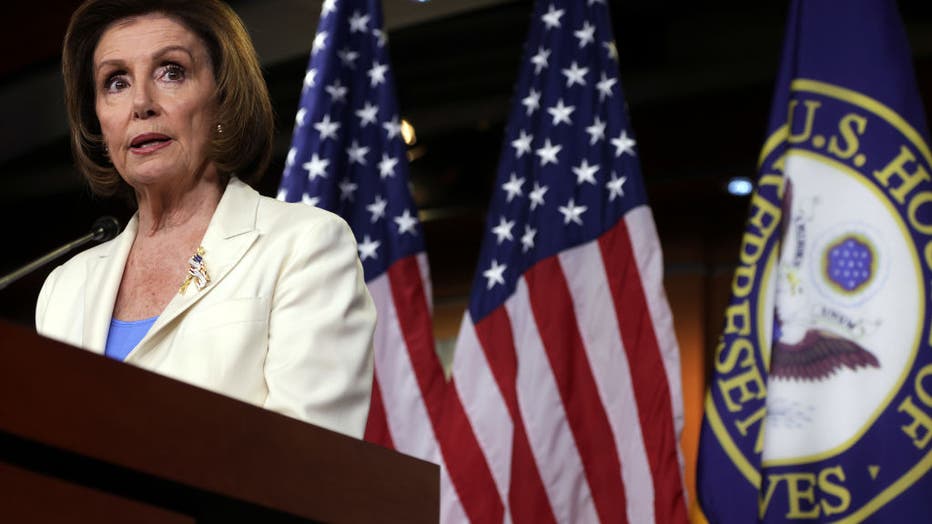 WASHINGTON, DC - JUNE 24: U.S. Speaker of the House Rep. Nancy Pelosi (D-CA) speaks during a weekly news conference at the U.S. Capitol June 24, 2021 in Washington, DC. Speaker Pelosi announced that she is forming a select committee to investigate th

Trump is not explicitly referenced in the legislation, which directs the select committee to investigate "facts, circumstances and causes relating to the January 6, 2021, domestic terrorist attack upon the United States Capitol Complex and relating to the interference with the peaceful transfer of power." The panel would also study "influencing factors that fomented such an attack on American representative democracy while engaged in a constitutional process."

The House passed the bill to form an independent commission last month, and Pelosi, D-Calif., said it was her preference to have an independent panel lead the inquiry. But she said last week that Congress could not wait any longer to begin a deeper look at the insurrection so she would form the select panel. She has not said who will lead it.

Still, Pelosi said that the select committee could be complementary to an independent panel, should one ever be formed, and that she is "hopeful there could be a commission at some point." Senate Majority Leader Chuck Schumer, D-N.Y., has said he might hold a second vote, but there’s no indication that any GOP votes have changed.

Many Republicans have made clear that they want to move on from the Jan. 6 attack, brushing aside the many unanswered questions about the insurrection, including how the government and law enforcement missed intelligence leading up to the rioting and the role of Trump before and during the insurrection.

Others in the GOP have gone further, with one suggesting the rioters looked like tourists and another insisting that a Trump supporter named Ashli Babbitt, who was shot and killed while trying to break into the House chamber, was "executed."

Two officers who battled the rioters, Metropolitan Police Officer Michael Fanone and Capitol Police Officer Harry Dunn, have been lobbying Republicans to support an independent commission and met with McCarthy on Friday. Afterward, they said they had asked McCarthy to denounce GOP comments downplaying the violence.

In the absence of an independent commission, Fanone said he asked McCarthy for a commitment not to put "the wrong people" on the new select panel and that McCarthy said he would take it seriously. McCarthy's office did not respond to requests for comment on either the meeting or the legislation to form the select committee.

The officers also asked McCarthy to denounce 21 Republicans who voted earlier this month against giving medals of honor to the U.S. Capitol Police and the Metropolitan Police to thank them for their service on Jan. 6. Dozens of those officers suffered injuries, including chemical burns, brain injuries and broken bones.

McCarthy, who voted for the measure, told them he would deal with those members privately.

Seven people died during and after the rioting, including Babbitt and three other Trump supporters who died of medical emergencies. Two police officers died by suicide in the days that followed, and a third officer, Capitol Police Officer Brian Sicknick, collapsed and later died after engaging with the protesters. A medical examiner later determined he died of natural causes.