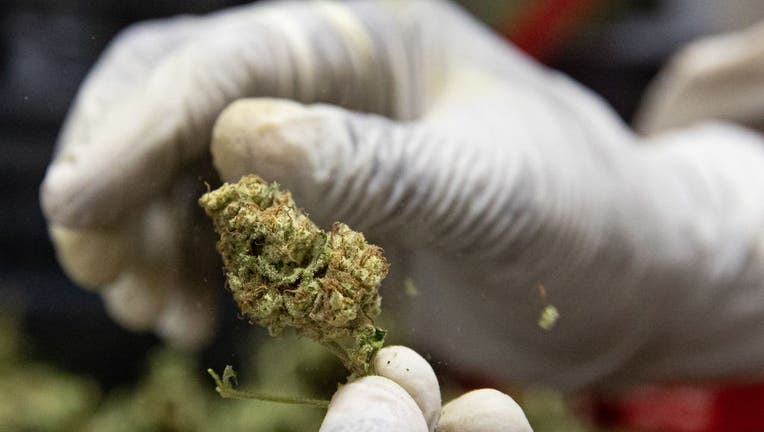 A file image shows a cannabis flower on Nov. 10, 2020 in Kasese, Uganda. Uganda is one of several African countries looking to produce medical cannabis for export to Europe and America. (Photo by Luke Dray/Getty Images)

WASHINGTON - The U.S. House of Representatives on Friday passed a piece of historic legislation that would federally decriminalize marijuana, provide various forms of relief to nonviolent federal marijuana convictions, and reinvest in communities hit hardest by the war on drugs.

On Friday, the Democratic-controlled House voted 228-164 to pass the Marijuana Opportunity Reinvestment and Expungement Act, or the MORE Act. The federal cannabis reform bill is the first of its kind in either chamber of Congress.

If signed into U.S. law, the MORE Act would decriminalize marijuana at the federal level but would not directly alter the status of cannabis under state law.

Supporters expected the legislation to pass in the House, but it was unlikely to advance in the Republican-controlled Senate. A related bill that would give pot businesses access to traditional banking services has languished in the Senate after being approved by the House last year.

Still, many advocates said passage in the House sends a symbolic message.

“The passage of the MORE Act is a critical first step in ending marijuana prohibition and empowering our nation’s health experts to advance an evidence-based, public health-focused approach to American drug policy,” the Last Prisoner Project, a nonprofit dedicated to drug policy and criminal justice reform, said in a statement.

At the federal level, cannabis remains a Schedule I drug — along with other substances like Heroin, LSD and ecstasy. But Americans are increasingly embracing marijuana across party lines.

A Gallup Poll released last month indicated that 68% are in favor of legalizing marijuana — double the approval rate in 2003.

In November, voters approved a series of cannabis ballot measures in Arizona, Montana, New Jersey, South Dakota and Mississippi. Marijuana will now be legalized for adult use in 15 states and medical use in 36 states.

“This gets the government out of the prohibition business and incentives states to move to legalization as many already have,” said NORML, a nonprofit working to reform marijuana laws since 1970.

The MORE Act would also provide reinvestment in certain communities negatively impacted by the war on drugs, funded by a 5% tax on cannabis products, and enable Small Business Administration funding for eligible cannabis-related businesses.

Additionally, the legislation would mandate a process to expunge convictions and conduct sentencing review hearings related to federal cannabis offenses.

“One of the biggest winners of the 2020 election was cannabis reform,” said U.S. Reps. Earl Blumenauer, D-Ore., and Barbara Lee, D-Calif., co-sponsors of the MORE Act and chairs of the Congressional Cannabis Caucus.

“Americans in five very different states voted overwhelmingly to liberalize their cannabis policies, and it is clearer than ever that the American people are demanding a change to outdated cannabis laws,” they added.

Lee and Blumenauer wrote a joint letter to Congress last month, highlighting the "critical issue of racial justice, and the failed war on drugs that has devastated communities of color, especially Black and Brown communities."

“We can no longer ignore our duty to repair the damage that this harmful form of systemic racism has done,” they wrote.