Kevin McCarthy on House Speaker win: ‘It’s not how I had it planned’

Kevin McCarthy (R-CA) was elected House Speaker after 15 votes. Following his election Saturday morning, he spoke to other lawmakers about his plans for the future.

The new GOP-led House passed one resolution to condemn attacks on anti-abortion facilities, including crisis pregnancy centers, and a separate bill that would impose new penalties if a doctor refused to care for an infant born alive after an abortion attempt.

Neither is expected to pass the Democratic-led Senate, but Republicans said they were making good on promises to address the issue along with other legislative priorities in the first days in power.

"You don’t have freedom, true liberty, unless government protects your most fundamental right, your right to live," said new House Judiciary Committee Chairman Jim Jordan, R-Ohio, who led debate on the measures. 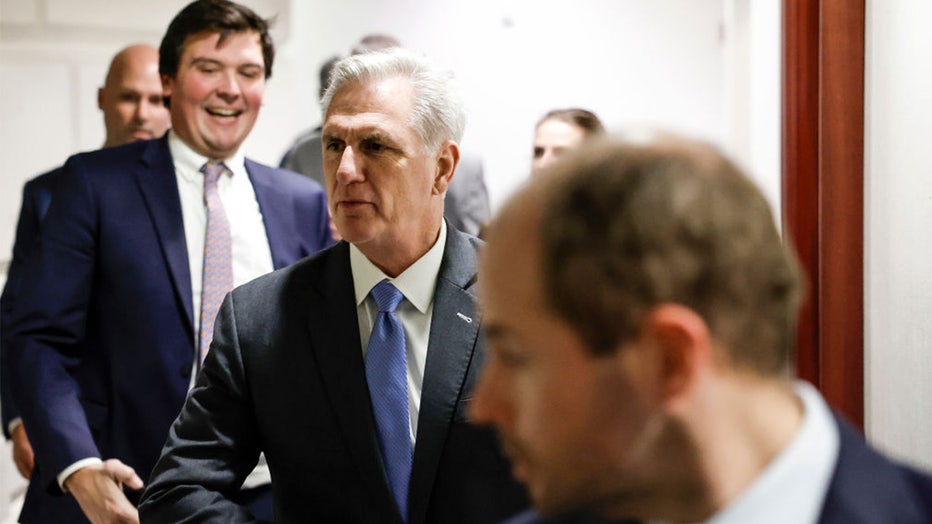 Even so, the two measures are far from a bold statement on abortion, which has proved politically tricky for Republicans since the June Supreme Court decision that overturned Roe v. Wade after almost 50 years and allowed states to enact near or total bans on abortion. While some Republicans have pushed to expand on the ruling with a national ban — or a compromise ban that would limit abortions after a certain point — many have rejected that option. And it has become clear that most Americans would oppose it.

A July AP-NORC poll showed Republicans are largely opposed to allowing abortion "for any reason" and after 15 weeks into a pregnancy. But only 16% of Republicans say abortion generally should be "illegal in all cases," and a majority, 56%, say their state should generally allow abortion six weeks into a pregnancy. According to AP VoteCast, a national survey of the midterm electorate, 61% of all voters said they were in favor of a law guaranteeing access to legal abortion nationwide.

The national sentiment has made some Republicans wary of the party's traditional full-throated opposition to abortion rights.

"This is probably not the way to start off the week," Mace told MSNBC.

Republicans supporting the two measures took pains not to connect them with overturning Roe, emphasizing that they were narrowly focused.

"I want to be absolutely clear that this bill has nothing to do with the Supreme Court decision," said Missouri Rep. Ann Wagner, the Republican sponsor of the bill.

Loudermilk said he thinks the issue should be left to the states for now, "otherwise we start muddying the waters again."

Emboldened by public opposition to the Supreme Court decision, Democrats enthusiastically opposed the measures, predicting that Republicans were only laying the groundwork for a national ban.

Democrats criticized the resolution condemning attacks on pro-life facilities as one-sided because it did not condemn similar — and long-standing — violence against abortion clinics. The resolution is "woefully incomplete," said New York Rep. Jerrold Nadler, the top Democrat on the House Judiciary Committee.

The Democrats argued that the legislation imposing new penalties on doctors is unnecessary because it is already illegal to kill an infant. It would create complicated new standards making it harder for health providers to do their jobs, they said.

"It is a mean-spirited solution in search of a problem," said Rep. Judy Chu, D-Calif.

Last summer, the Democratic-led House voted to restore abortion rights nationwide, but that legislation was blocked in the closely divided Senate. That bill would have expanded on the protections Roe had previously provided by banning what supporters say are medically unnecessary restrictions that block access to safe and accessible abortions.

The GOP bills are destined to suffer a similar fate in the Senate this session. Senate Majority Leader Chuck Schumer said Americans elected Senate Democrats "to be a firewall" against what he said are Republicans’ extreme views.

"Republicans are proving how dangerously out of touch they are with mainstream America," Schumer said.