SEATTLE -- Amid the hustle and bustle of a Sodo warehouse, a small memorial honors the life of a man named Celso Diaz, known as "Pete" around iClick Inc.

“Since he left, there’s a broom and a mop here that hasn’t been touched,” says Edward Cozarg, Pete’s friend and co-worker at the company.

Seattle police say that on November 21, someone driving a light-colored Toyota Prius hit and killed the 61-year-old as he rode his bicycle to work, at the corner of 1st Avenue South and South Andover Street. And the driver just continued on, as if he or she hadn't slammed into Pete so hard that he was sent flying up in the air.

“I didn’t know it was Pete, but I saw a bike and I thought oh my gosh, this is going to be somebody -- one of our warehouse guys,” Seo said. 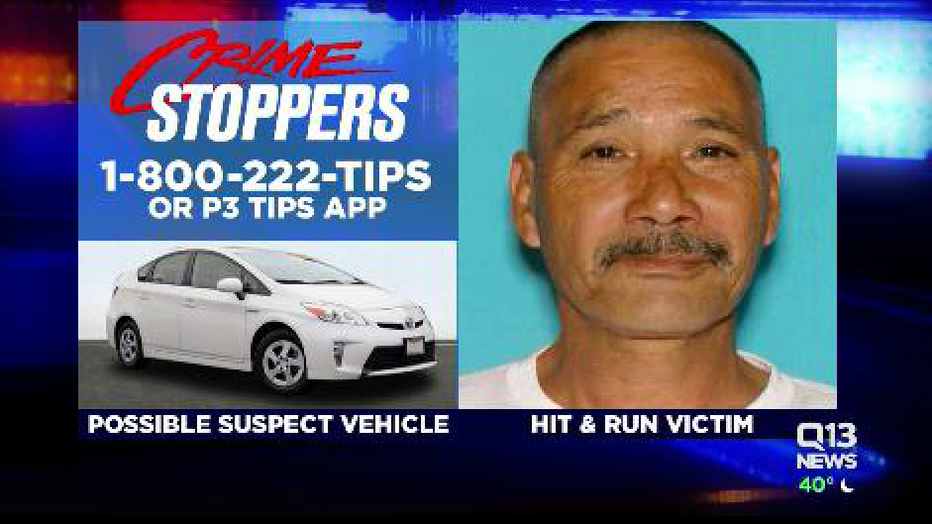 Surveillance cameras from an area business captured the hit-and-run. You can see Pete, in the bright yellow jacket, entering the unmarked crosswalk, attempting to ride his bike across 1st Avenue South. Q13 News is not showing the moment of impact.

Detectives believe the driver was speeding, going at least 60 mph in a zone designated as 35 mph.

Never once did the car stop.

Investigators believe the damage to the car may be the clues necessary to identify this driver, including damage to the fog lights, the front hood near the headlights and the windshield by the rear-view mirror.

Pete’s friends and co-workers plan to turn the break room at the iClick warehouse into a permanent memorial.

“Hopefully we can do something with that broom and mop out there; put it on the wall and bronze it or something,” says Cozarg.

“This is a human being. I hope they catch him, that’s all. He really was a gentle man,” says Seo.

Cozarg said just five years ago Pete was homeless and living in 'The Jungle' encampment.  Cozarg took him into his home and said Pete really turned his life around; he even got a place of his own. He says he was a true friend. And that is why it’s so important for them to get Pete the justice he deserves.

If you notice a 2010-2015 model light-colored Prius with suspicious damage, contact Crime Stoppers at 1-800-222-tips. You can remain anonymous and if your tip leads to an arrest you could receive up to a $1,000 reward.