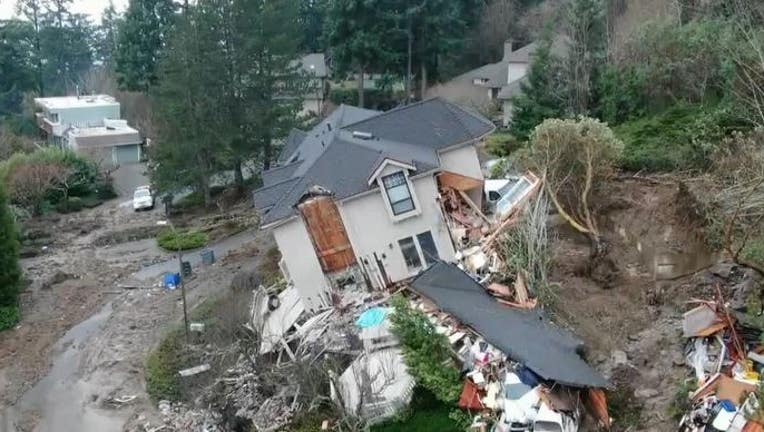 BELLEVUE, Wash - A family in Bellevue who lost everything in a devastating landslide hopes to reach a resolution and compensation soon.

On Jan. 17, 2021, the home of John and Barb Surdi was ripped from its foundation during a landslide. For the first time in 23 years, the Surdi family won’t be home for the holidays.

"This is where everybody came. The four kids and their spouses and the grandkids they’d be right here. That’s kind of hard this year for my wife," said John Surdi, as he walked through the space where his home once stood.

The crumbling structure was demolished, and all their memories were wiped away from their hilltop. Almost one year since the destruction, and fighting City Hall for justice, Surdi said a resolution could soon be their holiday miracle.

"There is a small glimmer of light. My attorney just told me that they’re trying to agree on a mediator to meet," said Surdi.

At the center of the investigation on what potentially caused the landslide is a water main that broke. It sent several tons of water and mud through the Surdi’s house. The pipe, more than 50 years old, is owned by the City of Bellevue. It’s made of a material called asbestos cement that becomes fragile over time. In the last several years, Bellevue has spent millions of dollars replacing asbestos cement mains all over town.

The owners of a home that slid off its foundation in a life-threatening landslide officially filed a lawsuit against the city of Bellevue on Wednesday, for unspecified monetary damages.

The City of Bellevue said it’s continuing the investigation into what happened, which included digging out the hillside to find the broken water main. The city said in a statement:

However, Surdi’s attorney, Dave Bricklin, said that statement doesn’t reflect what the city didn’t do.

"Never once [in the] city’s records did the city ever go in there and examine the pipe, take a look at how that joint was doing, determine whether that slope was moving at all, whether the pipe was moving at all. The city never did anything. And they knew that there was that house right below that pipe," said Bricklin, referring to his research of the city’s records.

Surdi and Bricklin said they hope to finally sit at the table with the city and a mediator within the next couple of months. Should it become necessary, the lawsuit they filed in June is set to go to trial in spring 2023.

"The old saying, ‘You can’t fight City Hall,’ and I’m learning. I’m fighting and I’m not going to give up until we win this," said Surdi.