A woman's home in Bellevue collapsed in a landslide, and a burglar tried to take advantage. However, the homeowner stood her ground and scared him off.

BELLEVUE, Wash. - The City of Bellevue says 24-hour security is now in place after someone tried to break into a red-tagged home near a house that slid off its foundation earlier this week.

Authorities said early Thursday morning a resident in the area reported that a man broke through the back door of one of the red-tagged homes. The homeowner confronted the would-be burglar and chased him off.

"I grabbed my pellet gun," homeowner Judy said, and she yelled "you get the hell out of my house right now!"

The suspect got scared and ran out the door.

Officers responded to the scene around 8:30 a.m. but the suspect was already gone.

"This is a terrible incident and just adds to the stress of the situation for the affected homeowners," said City Manager Brad Miyake. "As we work through this complex situation, getting neighbors back to their homes safely remains a top priority."

Residents of seven homes are still not able to get back into their houses after one home slid off its foundation early Monday morning.

"Security in this zone is a top concern for us," stated Interim Police Chief Wendell Shirley. "While our officers have been patrolling the slide zone on every shift, we are pleased the city has authorized us to provide off-duty officers as another line of security."

Frantic 911 calls after home slides off foundation in Bellevue

Hear the 911 calls after a home slid off its foundation earlier this week in Bellevue, Washington

Police received a call of flooding around 4 a.m. Monday and officers, along with fire crews, arrived to find a partially-collapsed two-story home listing at a 45-degree angle.

Two adults, a man and a woman, and their dog were able to safely escape from the large two-story home. They were unharmed.

John Surdi is the homeowner. He says he got a call around 4 in the morning from a neighbor reporting a lot of running water on his property.

Surdi says he drove his car around the neighborhood to investigate. He says when he got back, his home had collapsed.

Inside the home was Surdi's wife Barb and their nine-month-old dog.  Barb Surdi told FOX 13 News she will never forget going through the ordeal.

"I was catapulted," she said. " I was thrown out of the bed through the air," Barb Surdi added.

INTERACTIVE MAP: Check the ages and types of water mains in Bellevue | Seattle

She says she watched furniture topple over all around her, and glass explode into the air. She was on an upper floor, but couldn't get down because she says the stairs were gone.

Bellevue officers went into the home to rescue the family. They shared a photo of the officers on Monday afternoon. 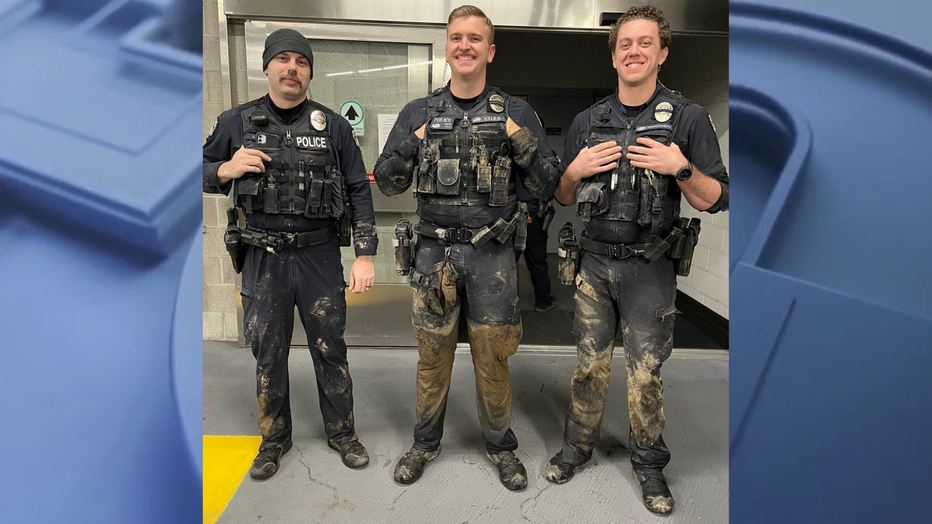 Meeghan Black, a Bellevue Police spokesperson, said the home appears to be the only one seriously damaged in the slide.

"This is pretty devastating," Black said. "We’re very, very fortunate that no one was injured."

Belleuve Utilities said an eight-inch water main was the source of the rushing water in the area, but they are not sure what caused the pipe to break or what caused the slide.

About 40 people from 17 homes in the immediate vicinity were evacuated. Only some of them have been able to return to their homes.