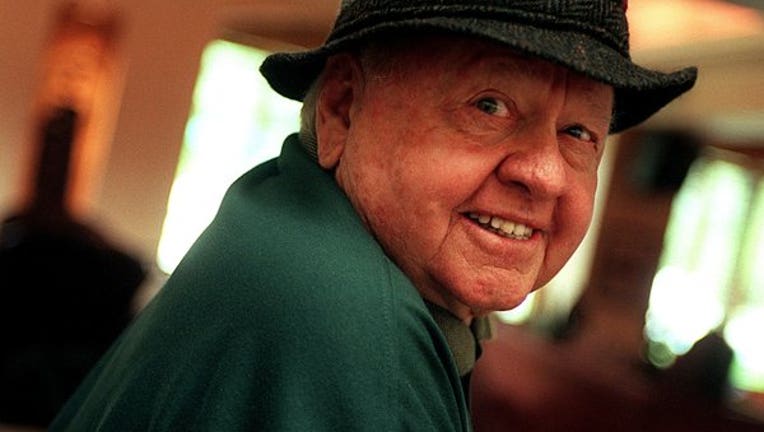 LOS ANGELES -- Everyone knows Mickey Rooney, but who really remembers the extent of his success? How many now living can testify not only to how large this man loomed over the American film landscape but also to the particular qualities that made him such an enormous success in his prime?


Everyone knows Rooney, who died at the great age of 93, precisely because he lived so long, the tireless last surviving star of Hollywood's 1930s Golden Age, a performer always ready to make an appearance when there was a crowd waiting to applaud.

But Rooney was more than just any star. In the final innocent prewar years of 1939, 1940 and 1941, he was the country's biggest box-office attraction, period, end of story. And the actor reached that pinnacle not by being a dashing action hero lead or a glamorous romantic lead, but by playing a teenage boy, a character one contemporary critic called "the perfect composite of everybody's kid brother." Nothing says more than that about how America's popular culture movie tastes have changed in the interim.

Rooney wasn't just any teenager either, he was brash, exuberant, unstoppable, the kind of kid Americans once upon a time liked to feel was representative of this country at its good-hearted, irrepressible best.

Even British rocker Ray Davies and the Kinks, who in 1972 recorded "Celluloid Heroes," their classic tribute to the stars on the Hollywood Walk of Fame, paid tribute to that quality by claiming, "if you stamped on Mickey Rooney, he would still turn round and smile." Just so.

Rooney seems to have come by his trademark industriousness and resilience honestly. He was born Joe Yule Jr., the son of two vaudevillians who took constant movement and hard knocks as a matter of course. He began his stage career as a toddler and his first film role came in 1926 when, at age 6, he apparently played a midget in something called "Not to Be Trusted."

The young boy's first sustained success came in a series of shorts made between 1927 and 1936 based on a comic strip character named Mickey McGuire. It was during that period that Rooney, having changed his name in the interim, claimed to have met and so inspired a young Walt Disney that he named Mickey Mouse after the lad right on the spot. Though Rooney, who loved to hold the spotlight, told this story with so much drama and passion it seemed churlish to doubt him, most Disney authorities feel it simply never happened.

What did happen was a series of unlikely costars for this youthful ball of energy. Rooney appeared with cowboy hero Tom Mix, lion tamer Clyde Beatty, even the sultry Jean Harlow. He also found time to play Puck in a glorious version of "A Midsummer Night's Dream" produced and co-directed by the great German impresario Max Reinhardt.

Rooney's gumption got him a contract at MGM, where he attracted the attention and admiration of studio head Louis B. Mayer. It was under Mayer's aegis that Rooney made a series of 15 Andy Hardy films that were the apotheosis of his boy next door persona.

Playing a tireless scamp of a teenage boy who was always needing the sound advice of his father, the ever-judicious Judge Hardy (played first by Lionel Barrymore, then Lewis Stone, Rooney made the young adult state an object of fascination for American audiences decades before Ferris Bueller even thought of taking a day off.

Though his nominal love interest in the series was played by Ann Rutherford, Rooney's most famous Hardy collaborator was a young Judy Garland. Rooney and Garland also costarred in an MGM version of Rodgers and Hart's musical "Babes in Arms," much beloved to this day for its enthusiastic "Hey kids, let's put on a show" storyline.

If enthusiasm was always Rooney's stock in trade, America was less interested in buying during the years following World War II. The actor's "look at me" energy level started to wear out its welcome, with British critic Dilys Powell tartly commenting that the highly visible Rooney "has for some years now had nothing to learn except, perhaps, reticence."

But though he had some bad years, even bad decades, working his way through eight wives (including Ava Gardner) and innumerable career revivals, the resilience that the Kinks noticed finally began to pay dividends for the actor as he approached his 60s.

In 1979, for instance, Rooney's stage career took off when he costarred with Ann Miller in the burlesque-themed musical "Sugar Babies" and his role as venerable trainer Henry Dailey was a key part of the success of "The Black Stallion." In 1981, the actor won an Emmy for playing a once-institutionalized individual now out on his own in "Bill" and in 1983 he took home an honorary Oscar for lifetime achievement. Like many of his more mature characters, Mickey Rooney was a survivor, and there is a lot to be said for that.


WATCH: Mickey Rooney hunts this Rainier Beer in a TV Ads from 1980