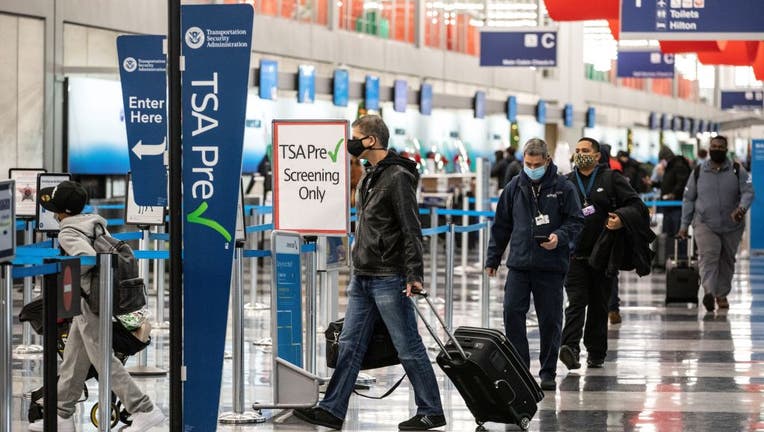 Nearly 1.2 million people passed through U.S. airports Sunday, the largest number since the pandemic gripped the country in March, despite pleas from health experts for Americans to stay home over Thanksgiving.

The Transportation Security Administration screened at least 1 million people on four of the last 10 days through Sunday. That's still half the crowd recorded last year at airports when more than 2 million people were counted per day.

With newly reported cases of coronavirus spiking across the country, the U.S. Centers for Disease Control and Prevention had issued a warning against Thanksgiving travel just a week before the holiday.

The seven-day rolling average for daily new cases in the U.S. has climbed to more than 160,000, according to data from Johns Hopkins University. Public-health experts believe others who are infected don’t show signs of carrying the virus.

RELATED: Moderna will ask FDA for emergency use authorization of coronavirus vaccine

Previous holidays including Memorial Day, July 4, and Labor Day were followed by increases in new cases. David O’Connor, a virologist at the University of Wisconsin who has studied the role of travel in the pandemic, expects the same thing to happen after Thanksgiving and leading up to Christmas.

“Travel is going to be contributing to a bigger surge. What we see in the next couple of weeks will tell us a lot about what will happen after Christmas,” he said. “We’re in the midst of a catastrophe as it is. You don’t need a surge for it to become horrible. The health care systems are already stretched."

Dr. Anthony Fauci, the nation’s top infectious-disease expert, said Sunday that the U.S. could see “surge upon a surge” of coronavirus cases, and he does not expect guidelines advising against travel to be relaxed before Christmas.

It's unclear whether the pleas of experts like Fauci had any effect on travel and large gatherings at Thanksgiving. Some airlines reported a pullback in bookings as virus cases grew in the days before the holiday.

Airlines say the risk of transmission during flights is very low if everyone onboard wears a mask. Experts on epidemics say even if that is true, travelers can spread the virus once they get off the plane.

Before the latest surge in infections, airlines had added more flights for Thanksgiving, hoping for the same kind of boost in travel they saw over the July 4 and Labor Day holidays. They ended up canceling some of those flights, however, and demand is expected to fall back in early December before another potential pick-up in travel around Christmas.

Over a 10-day period ending Sunday, TSA screened about 975,000 people a day on average. That's down 60% from a year ago, when more than 2.3 million people per day went through U.S. airports.

On Monday, JetBlue Airways said “booking trends remain volatile,” and recovery in travel demand will be uneven into next year.

JetBlue, the nation’s sixth-largest airline, plans to fly only half its normal schedule in the fourth quarter and revenue will fall about 70% from the same period last year. Those are slightly deeper reductions in flying and revenue than the New York carrier had expected before the recent spike in infections.