Winds picked up to gale-force strength across western Washington, and Q13's Simone Del Rosario was right in the middle of it.

SEATTLE -- Winds will pick up with strong gusts as a front pushes into Western Washington starting Wednesday afternoon.

The National Weather Service issued a high wind warning from 1:00 to 10:00 p.m. Wednesday for the Cascades, the Cascade Foothills and east Puget Sound lowlands.

Sustained easterly winds of 30 to 40 mph were expected with gusts of 50 to 60 mph were possible.  More than 20,000 people were without power across western Washington Wednesday evening.

Strong winds were also forecast for the Washington coast and inland waterways.

"Damaging winds combined with the heavy wet snow will blow down trees and power lines," meteorologists with the National Weather Service said. "Power outages are likely. Travel will be difficult, especially for high profile vehicles." 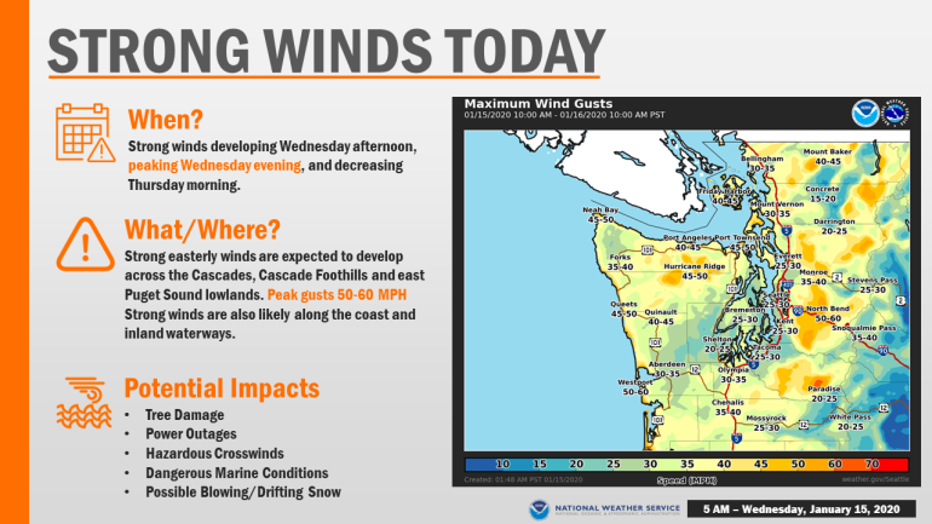 More snow was possible Wednesday afternoon along the Olympic Peninsula and in north Kitsap County.

The Puget Sound lowlands could see snow which will turn to rain as temperatures warm up toward 40 degrees.