KENT -- One student was seriously injured and two others were hurt in a multi-car crash Tuesday morning outside Kentridge High School, Kent police said.

According to investigators, a Renton police detective saw the accident occur at 11 a.m. outside of the high school near the intersection of 208th Street and 120th Place SE in Kent. Realizing it was a devastating crash, the officer ran to the scene and immediately began lifesaving efforts on the  16-year-old male driver of one of the cars.

The driver was transported to Harborview Medical Center where he is in grave condition, officials at the hospital said. The Kent Police Department earlier reported he was dead, but that report was false. 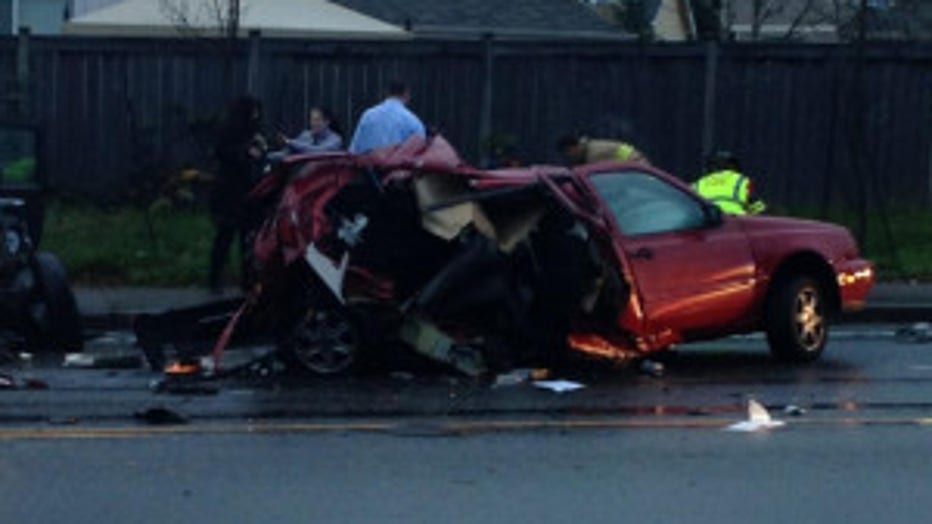 Two other occupants in the vehicle, both teenage females, were transported to the hospital with non-life threatening injuries.

Initial investigations revealed a 49-year-old Kent resident was attempting to make a left-hand turn onto westbound 208th Street and struck the teenage driver on his way to school. The impact caused the student's vehicle to careen into westbound traffic, police said, and another vehicle traveling at a high rate of speed hit the student's car.

It is unclear whether either driver of the other two vehicles was injured, police said.

Traffic Sgt. Robert Constant said Kent police will investigate the crash, and that it is a "tragedy to lose one so young in our community."

Kent School District said additional counseling resources would be available to those that might be impacted.

This story is breaking and will be updated as more information comes in.