Hubert and June Malicote would end up passing just 20 hours apart from one another. They just celebrated their 79th wedding anniversary and both turned 100 in July.

Francis "June" Malicote and William "Hubert" Malicote did everything together. They both turned 100 this past July together and celebrated their 79th wedding anniversary in June, together. And this past November and December, they both passed away — together.

Hubert would end up passing away on Nov. 30 and June would follow her husband just 20 hours later on Dec. 1. The pair were laying side by side, holding hands.

The fact that the couple died less than a day apart is a true testament to their connection and unwillingness to live without the other. At least, that’s what their family members say.

"They were just so connected, so connected. Mentally and emotionally," Jo Malicote, June and Hubert’s middle child and daughter, told FOX TV Stations. 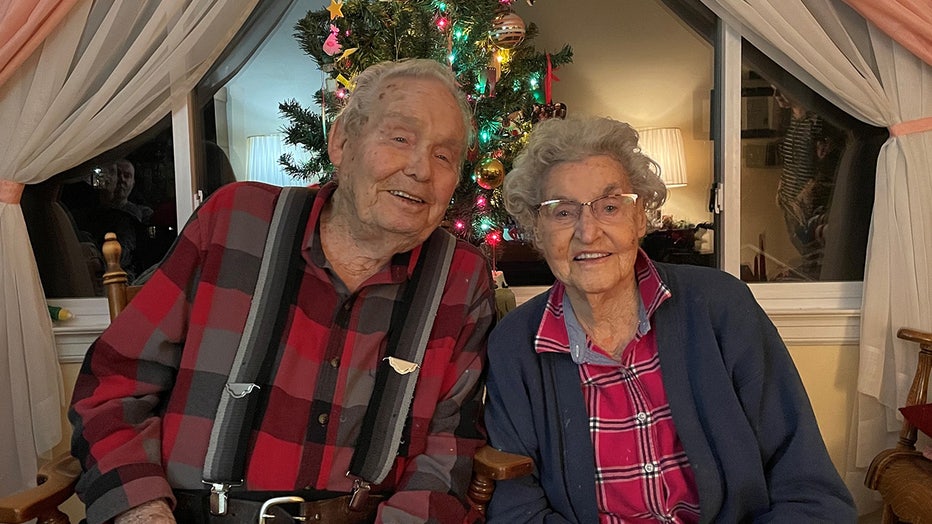 Hubert and June pictured together in front of a Christmas tree. (Jo Malicote)

Sickness would not separate them

June was diagnosed at the end of the summer with a narrow mitral valve in her heart and was told by physicians she would probably not make it past the end of this year, according to Jo.

"There are procedures that can be done but not at 100 years old," Jo said. "She’s too old for the procedure."

And then in mid-October, June suffered from a severe urinary tract infection, which had been coming and going since last January.

"Each one was chipping away at her and then add this microvalve. She just was declining so fast," Jo said.

June’s condition worsened to the point that on Thanksgiving night, she began to suffer from major intestinal issues and had to be taken by ambulance to the hospice that following Friday.

The day after June was transported to hospice, Jo said she witnessed her father cry, which did not happen often.

"He really never was the same after that," Jo said.

A changed husband and heartbreak

Jo said her normally sprite, talkative and voracious father within hours turned reserved, quiet and no longer had an appetite.

"My dad ate like a lumberjack right up till Friday night," Jo said.

She also noticed her father began to become confused and felt that the home he had helped to build from the ground up was no longer his home.

"All of this was very, very, very different for my father."

The following Saturday, both Jo and Hubert made their way to see June once she was settled in her hospice room.

"When we got down to the hospice center, he was sitting there in his chair holding my mother’s hand and trying to talk to her and she was sound asleep," Jo said.

June had been able to communicate with Hubert the night before she left for the hospice but was in somewhat of a comatose state when both her daughter and husband came to visit, according to Jo.

"I think at that point, it all clicked that, ‘My honey, is not coming home,’" Jo said of her dad.

From there, Hubert’s health began to inexplicably decline, and within a week, he was bedridden and committed to hospice care, Jo said. 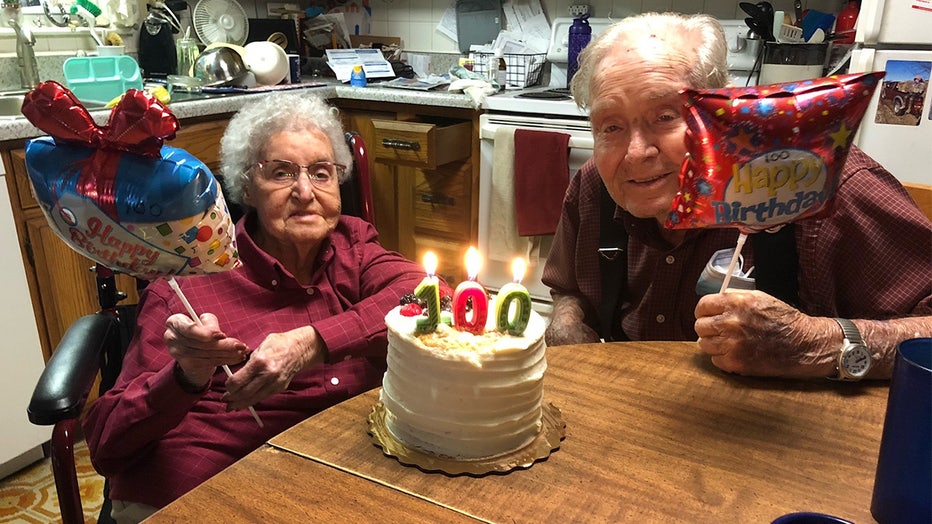 "My dad wasn’t sick. He had, even just a few days before he began to decline, he had been up in his workshop. He had been hanging out with a friend of his who was working on his tractor. And dad’s a beekeeper, we’d been up checking on the bees just to make sure they were ready for the winter. So, my dad, he wasn’t sick," Jo said.

Hubert may have needed some help here and there to dress and maybe get his shoes on because he was a bit unsteady on his feet, but apart from that, he was the epitome of health for someone who was 100 years old.

"He was so sharp. He was as sharp as he was when he was 25 years old, it was astonishing," Jo recalled.

Hubert did suffer from an irregular heartbeat due to his advanced age, but Jo said she believes as soon as he saw his wife in the state that she was in, he couldn’t go on.

"I truly believe that my dad, over the course of Saturday and into Saturday night, willed himself that he was not coming home either. He was going to go ahead of my mother and he was not going to let her go alone," Jo said.

"He was going to go ahead of my mother and he was not going to let her go alone."

And, Hubert, being the handyman that he was, could fix anything, and this was his way of "fixing" a possible life without his wife, his granddaughter, Annie Klenk, speculated.

"He could fix any car, he could repair any appliance. Anything that you brought to him, my dad fixed it. He never had a repairman in his house until a couple of years ago," Jo said. "So, as my daughter, Annie, said, ‘Mom, he just fixed it. He knew the situation, so he just fixed it.’"

"It broke his heart and he wasn’t going to let her go alone or first; he was going to wait for her," Jo added. 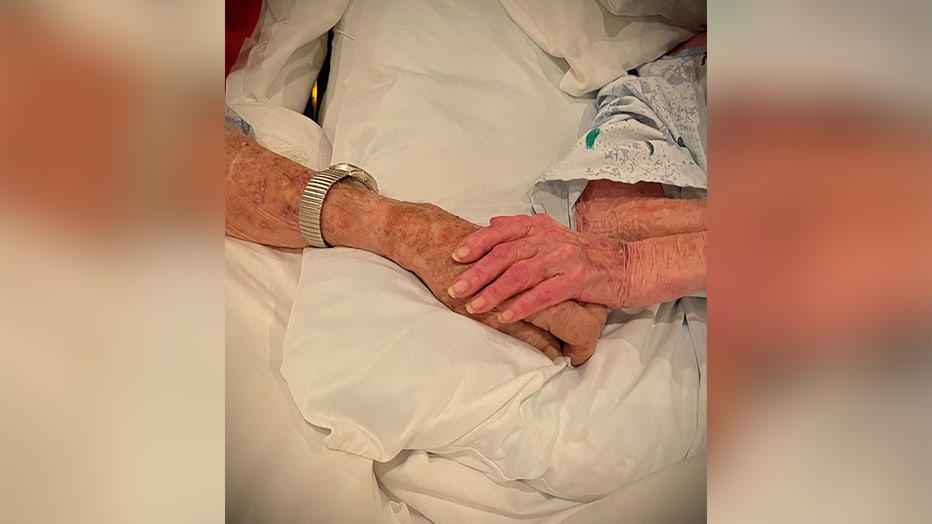 So, within a matter of a week, Hubert was admitted to the hospice and would have a bed right next to June’s. And on Nov. 30, while clutching his wife’s hand, Hubert passed away at 9:30 p.m.

"We gave her permission to go on, ‘Mom, it’s OK, we’re going to be fine. You go on, Daddy’s waiting for you,’" Jo recalled of her mother’s final moments. 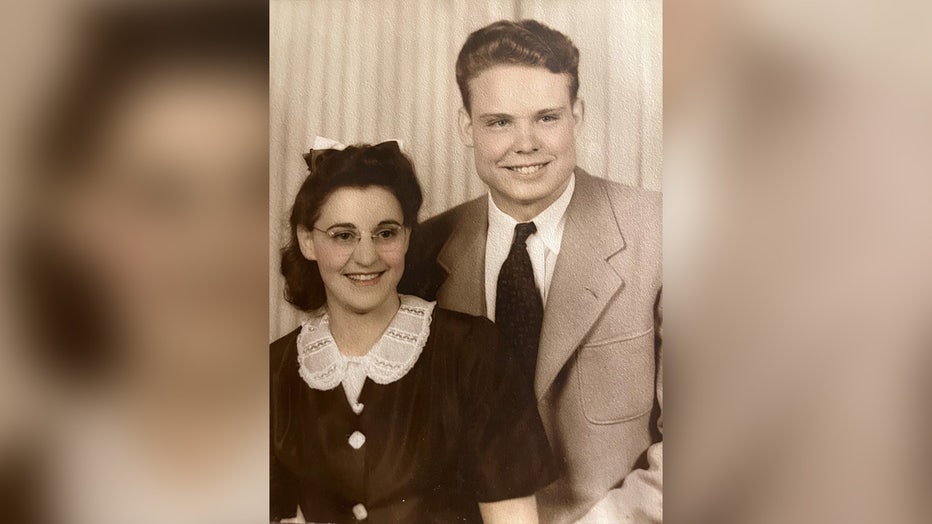 Together for 81 years and now forever

June and Hubert were together for 81 years and had been married for 79 years.

Hubert was a World War II veteran and served in the Navy at Pearl Harbor in Hawaii and June worked in a torpedo factory in Hamilton, Ohio, during her husband’s deployment.

The day after their wedding, Hubert was off to fight in WWII and was away from June for two more years. Once the war ended, Hubert made his way back to Ohio where he and his wife would begin their lives together. 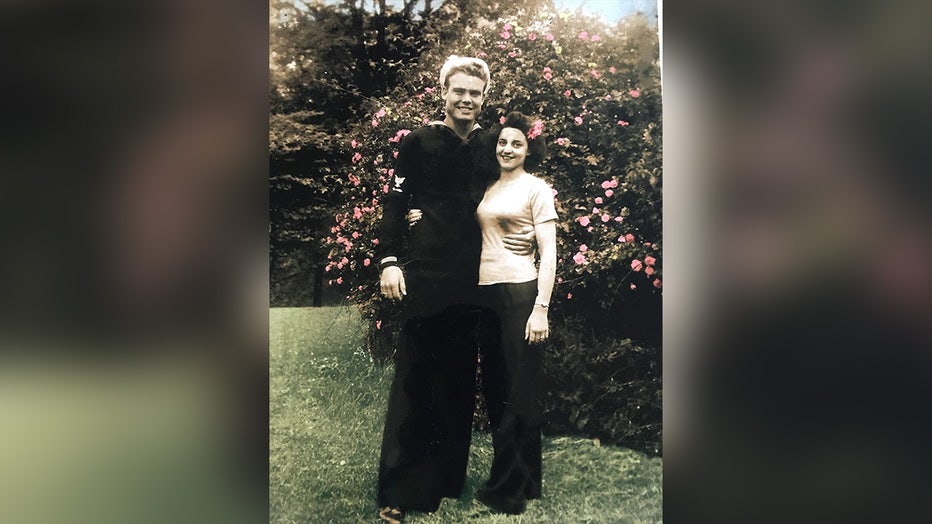 Hubert in his navy uniform and June. (Jo Malicote)

And this past summer, the pair earned the title of the longest-married couple in Ohio, Jo said.

Hubert and June are survived by their three children, seven grandchildren and 11 great-grandchildren.

The pair were laid to rest on Dec. 8, side by side.