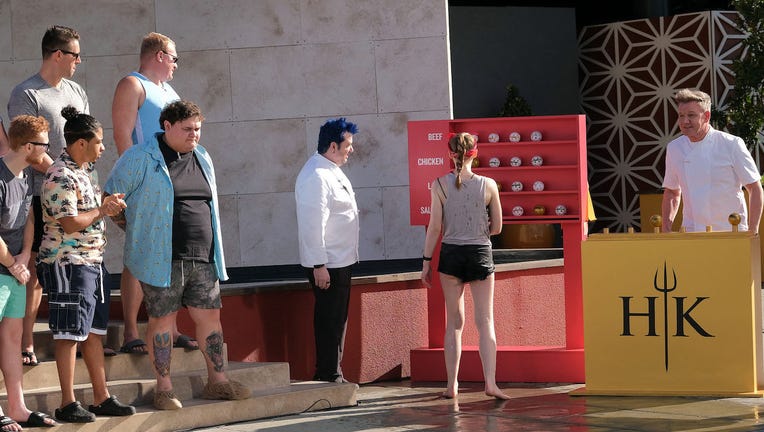 CHICAGO - Last week’s episode of "Hell’s Kitchen," "Slipping Down to Hell," saw the contestants adjust to a big rules change — all while going down a literal waterslide. Get caught up before this week’s new episode. Need more? You can read our recapsof this season, starting with the premiere, and watch the show On Demand, on FOXNow, on Hulu and on Tubi, FOX’s free streaming service. This television station is owned by the FOX Corporation.

"That just changed everything": We hear sentiments like that a lot on "Hell’s Kitchen," a show that indulges in plenty of the frenzied hyperbole you see on shows like "The Bachelor." In this case, however, that sentiment is accurate.

At the end of the previous episode, Chef Ramsay abandoned the season’s "Battle of the Ages" gimmick, shuffling all the boys to the blue team and all the girls to the red. This came after the team of fortysomethings lost their third team member in as many episodes, which was merely the latest sign that they were hopelessly outmatched by their twentysomething opponents. Now, it seems, the competition won’t be so lopsided.

The blue team is thrilled. "The bromance is real here," bellows the elder Billy, who can’t stop hugging his new teammates. The red team, not so much. Sommer, one of the most vocal young cooks, is wary of her new teammates. "We haven’t even seen you guys cook," she says to Tara, Nicole and Mindy. Mindy tries to put their struggles into perspective. "We’re owners," she explains. "We haven’t been on a line in a while." 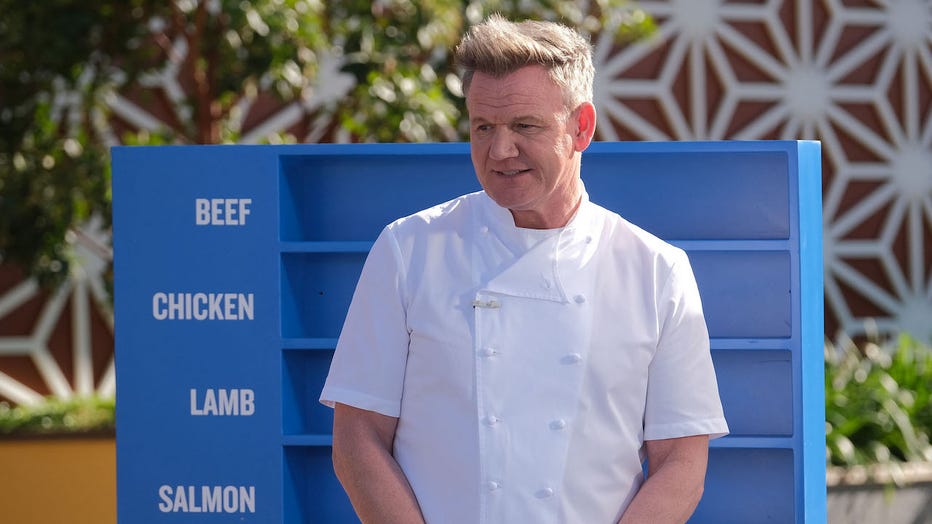 Christine gathers the cooks the next morning for their daily challenge, telling them to bring their "beachwear." The "beach" turns out to be the Hell’s Kitchen parking lot, which has been outfitted with a waterslide and pool.

Ramsay informs them it’s time for the "Slip and Slider Challenge." The cooks will plunge down the waterslide into a pool filled with hundreds of balls, each of which is marked with a different ingredient. They’ll grab one ball every time they slide and then hurry to place that ingredient-ball on a shelf labeled with one of four different proteins: chicken, beef, lamb or salmon. These are the four sliders they’ll be making later, and whatever ingredients they place on each shelf must be incorporated into the corresponding slider. Whoever fills their board fastest gets a five-minute head start.

WATCH FREE ON TUBI: Gordon Ramsay's "24 Hours to Hell and Back" — get the app

The red team is up first and they really want the advantage. Their speed, however, results in them grabbing ingredients with little forethought. Somehow, blue cheese gets paired with lamb (no good), two different kinds of cheese are paired with beef (too much) and one slider gets stuck with two different types of cucumbers (nobody needs that).

The blue team opts for a more strategic approach. They’re careful about the balls they scoop up from the pool, thinking hard about what would go well with the various proteins. That slow approach costs them the advantage — the red team wins by three seconds — but, as Alex puts it, "Five minutes don’t mean nothing if you can’t do anything with your ingredients."

"Hell’s Kitchen": A side of bruised egos 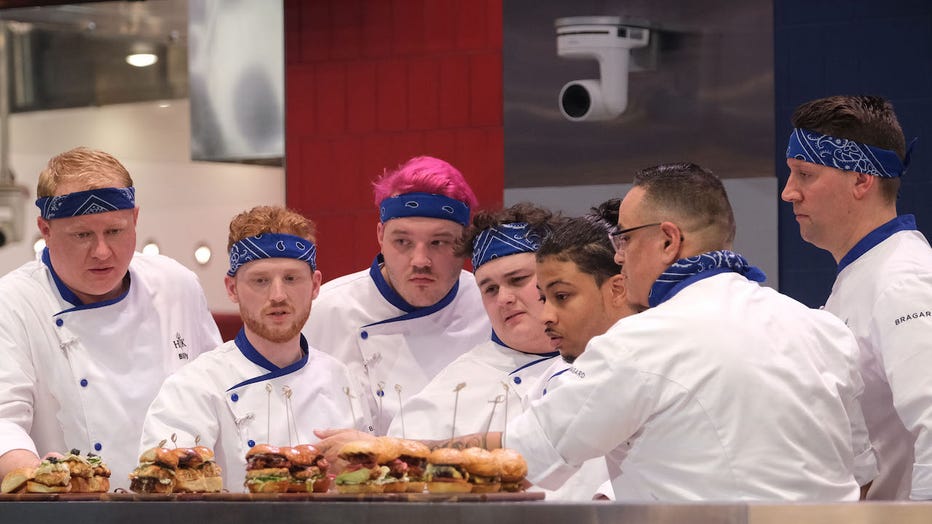 The teams retreat to the kitchen and Brett says the boys are "buzzing." That goes double for Billy, who’s back to talking like Ashtray on "Euphoria." "I’m gonna make a pesto and I’m definitely gonna butter up my brioche buns, know what i’m saying? That’s how B-True does it!" Why must he do this?

Two cooks are assigned to each protein, with each making their own individual slider. Ramsay, however, will only taste one. That leaves it to the cooks to decide which one they will put up for competition. Billy, as is often the case, is furious that the team doesn’t want to dish up his lamb sliders. "They look a little dry," Vlad observes, a nice way of saying they’re clearly burnt. "I think they’re threatened by me," asserts Billy.

Sommer and Nicole argue over who will be the red team’s beef representative — Nicole wants to prove herself, but Sommer believes her slider is better than Nicole’s. Sommer gives in after recalling her poor performance in last week’s lobster challenge, when she crashed and burned after advocating for herself.

The guest judge for the challenge is David Meyers, the Michelin-starred chef behind the Adrift restaurant empire. He and Ramsay will be judging on a scale of one to three stars. The team who gets the most stars in the end wins.

WATCH FREE ON TUBI: "Michelin Stars: Tales From the Kitchen" — get the app

The red team takes an early lead thanks to Alyssa’s ground chicken burger with a poblano mango chutney, which gets a perfect score. Dafne also scores big with her poached salmon slider with black garlic and pickled fennel. Tara, however, can’t meld lamb and blue cheese in a way that satisfies and gets a single star from both Ramsay and Meyers. 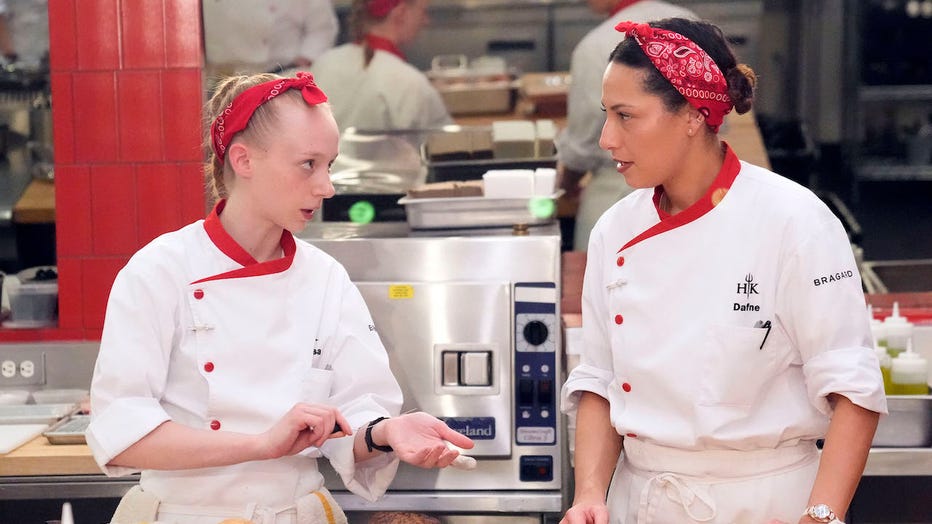 In the end, it comes down to the beef sliders. The red team is up 12 to 11. Brett scores big with his double smash burger with fried quail egg and black truffle butter. "This is what I call a burger," raves Meyers. For the red team to win, Nicole needs to get a total of five stars from Ramsay and Meyers. Instead, her "meat and potatoes" burger with white cheddar and bacon gets just a single star from each judge. "It just needs a lift," says Ramsay. Meyers calls it "a bit one-dimensional." The blue team wins.

In classic "Hell’s Kitchen" fashion, Ramsay asks to taste Sommer’s beef slider with pickled red onion and bacon. "This is delicious," he says. "This was a winner," adds Meyers. Sommer spirals into tears, saying she’s trying to learn "when to step back" but that it was a mistake to do so here. Lobster challenge be damned, she knew her slider was better than Nicole’s. She and the rest of the red team are tasked with washing, peeling, cutting and frying potatoes for the next night’s dinner service.

WATCH FREE ON TUBI: "Lobster War: The Fight Over the World's Richest Fishing Grounds" — get the app

The blue team is ecstatic to win a "glorious getaway to sunny Palm Springs." There, they sip champagne, push each other into a pool and bond over missing their loved ones. "This is the way the team was supposed to be," says Alex. 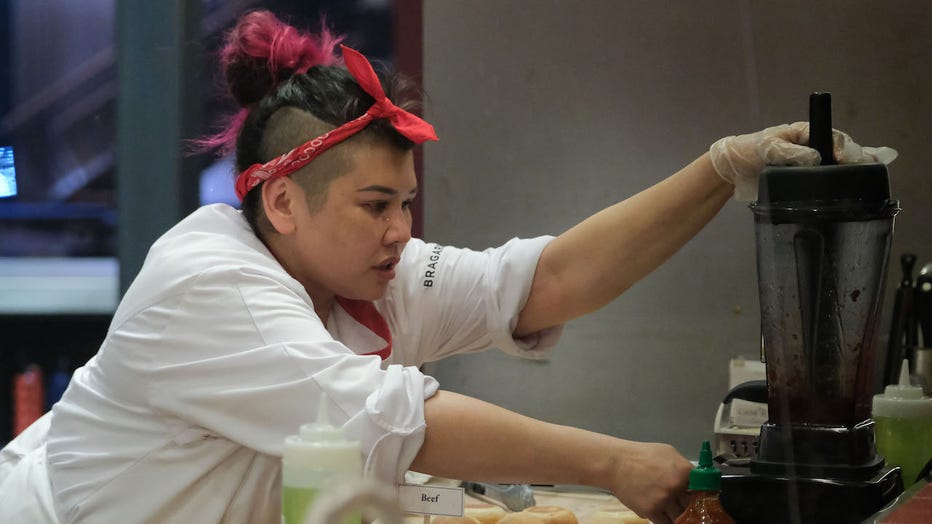 Morale is low on the red team. Nobody is confident in Nicole, who flails as the team preps for dinner service. "Nicole doesn’t have a clue about anything," says Sommer. "I think she knows what goes in each dish, but I don’t think she can follow our tickets," adds Ileana. Nicole says if she gets overwhelmed, her team should say, "It’s okay, Sandwich," which is what Nicole says to her dog when it freaks out.

Service starts strong for both teams. Mindy, who earlier shared a touching story about her weight loss journey, gets some one-on-one mentoring (and a few compliments) from Ramsay on the app station. And the kitchen’s special guests, Skid Row singer/"Gilmore Girls" star Sebastian Bach and "High School Musical" alum Corbin Bleu, seem pleased. Bach, in particular, might be the most excited anyone’s ever been to be at Hell’s Kitchen. "I’m such a fan!" he gushes to Ramsay.

WATCH FREE ON TUBI: It’s Corbin Bleu vs. witches and snow in "Witches in the Woods" — get the app

Soon, however, cracks begin to show. Brett, who’s on garnish, gets on Ramsay’s nerves by trying too hard to insert his voice into every station. Sommer and Alyssa, meanwhile, serve up raw lamb after butting heads the whole night. Later, the red team runs out of salmon after too many portions are overcooked by Dafne. This results in Ramsay bringing the blue boys into the red kitchen to get them back on track. This, obviously, does not sit well with the red team, who’d much rather not have the dudes taking over their stations.

Unsurprisingly, the blue team emerges victorious. Ramsay tasks the red team with nominating three cooks for elimination. As they debate who to send up, the conversation circles around who made the most mistakes that evening (Alyssa, Dafne, Mindy) and who’s the weakest cook overall. Everyone who isn’t Nicole agrees that Nicole is the weakest, but Cheyenne points out that they’ll "look stupid" if they put her up since she wasn’t the one who messed up during service. That said, she also didn’t contribute much to service. On garnish, they say, she just "got in the way."

WATCH FREE ON TUBI: "Anthony Bourdain: A Cook’s Tour" — get the app

Ramsay, somewhat surprisingly, agrees with their choice to put Nicole up. Once they get before him, he criticizes her lack of passion and accuses her of "hiding" during the service. That, to him, is more unforgivable than the mistakes made on the meat and fish stations. He eliminates Nicole.

"I’m a little disappointed in the girls," Nicole says during her farewell. "I feel like I was abandoned by them."

She was absolutely abandoned by them, but that’s how this game is played. As numerous seasons of "Hell’s Kitchen" have shown, the best thing a struggling team can do is lose their dead weight. Everyone performs better when there are no weak links. The tighter a team gets, the more we begin to see who’s actually capable of running a kitchen.

About the writer: Randall Colburn is a writer, editor, and podcaster based in Chicago.

"Great British Bake-Off" icon Mary Berry cooks up comfort food in her cozy kitchen, casually coaxing curious cooks into concocting Berry’s favorite recipes. (No, we will not apologize for any of that alliteration.) One season, eight episodes.

How to watch "Hell’s Kitchen"

"Hell’s Kitchen" airs Thursdays at 8 p.m. EST on FOX. You can also watch On Demand or stream online via FOXNow. 13 seasons, including much of the current season, are streaming on Hulu. And Tubi’s Gordon Ramsay channel offers many of Ramsay’s seemingly infinite shows, including "MasterChef," "MasterChef Junior" and "Next Level Chef," his latest.