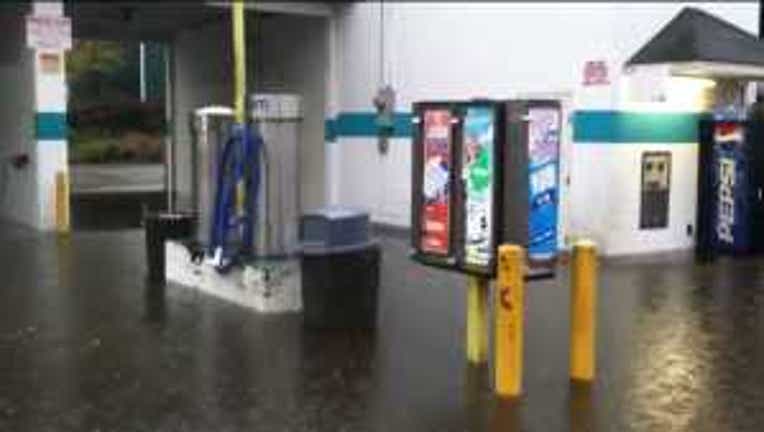 PORT ORCHARD, Wash. -- Heavy rains and high waters raised concerns in many communities Monday as a wet and windy storm pushed through the region.

In Seattle, many residents woke up to find their property flooded with water. Amber Spears, a North Seattle resident, found a moat in her back yard.

"I feel bad for all the people who live here and all my stuff that's getting ruined," Spears said. "I'm hoping they're gonna do something. I don't know what they're going to do."

Resident Dan Garreston was forced to move out of his basement apartment to find dry ground. But somehow, even with the damage, he still had a smile on his face.

The town of Port Orchard in Kitsap County has been hit especially hard by the storm. Major streets were shut down, homes became inundated with standing water and businesses were breached by water; a problem made doubly worse by the high tide.

On Monday, sand bags lined the front of businesses on Bay Street, one of Port Orchard's main throughways. The road was briefly shut down, said Port Orchard's Police Commander Geoffrey Marti, to avoid severe damages to the stores lining the street.

"We shut it down before any cars got stalled in the street and we were just starting to get some flooding in the businesses behind me," Marti said. "A lot of that was caused by big trucks going through causing a big wake and the waves would go into the front of the businesses."