Rep. Marjorie Taylor Greene is questioned on comments she made about House Speaker Nancy Pelosi. Greene had called Pelosi a "traitor to our country."

ATLANTA - Testifying in a hearing on her eligibility to run for reelection, U.S. Rep. Marjorie Taylor Greene said she did not remember liking and making various social media posts surrounding the attack on the U.S. Capitol last year and accusing an opposing lawyer of using chopped videos and twisting her words.

Greene qualified to seek another term in the 14th Congressional District March 7, but a little more than two weeks later, a group called "Free Speech for People" filed a legal challenge with Secretary of State Brad Raffensperger.

The organization filed the 42-page complaint on behalf of five 14th district voters. It alleges that Rep. Greene should be disqualified because of a clause in the 14th Amendment that says, "no person shall be a Senator or Representative in Congress... who, having previously taken an oath, as a member of Congress... to support the Constitution of the United States, shall have engaged in insurrection."

Rep. Marjorie Taylor Greene was called to the stand to testify in a hearing about whether she would be able to run for re-election to Congress.

At the hearing, Greene entered the courtroom to loud applause from supporters in the audience, prompting a deputy to remind the group that no shouting was allowed.

Ron Fein, the legal director of Free Speech For People, started his case by referencing the Civil War and argued that the evidence would show that she was a leader in facilitating the attack.

The challenge points to Rep. Greene's comments leading up to the insurrection at the U.S. Capitol on January 6, 2021, and points to a specific interview on Newsmax the day before where Greene said "this is our 1776 moment."

Fein argued that, while Greene was not on the Capitol steps herself, she "played an important role" to "help facilitate" the Jan. 6 riot.

Rep. Marjorie Taylor Greene took the stand to testify in a hearing about whether she would be able to run for re-election to Congress.

In response, Greene's attorney James Bopp argued that removing Greene from the ballot would deny voters of their rights.

Our democracy is at stake," Bopp said. "Right here, right now. Because they want to deny the right to vote to voters in the 14th District. These voters have a right to vote for the candidate of their choosing."

Greene met with Trump about making objections to certain states’ electoral votes because of concerns about voter fraud, Bopp said. At the time of the riot, she was in a dark hallway at the Capitol urging people via social media to be safe and remain calm, he said.

"Rep. Greene was a victim of this attack," Bopp said, adding that the congresswoman was scared and confused and believed her life could be in danger.

Rep. Marjorie Taylor Greene returned to the stand to testify Friday afternoon in a hearing over her eligibility to run for re-election.

As Andrew Celli, a lawyer for the voters, cross-examined Greene about the intent behind a series of her tweets, he appeared to grow frustrated at times when she didn’t directly answer his questions and said he was speculating.

Greene filed a lawsuit against Sec. Raffensperger to try to stop the hearing from going forward, but a federal judge ruled against her earlier this week. Greene has filed an appeal. 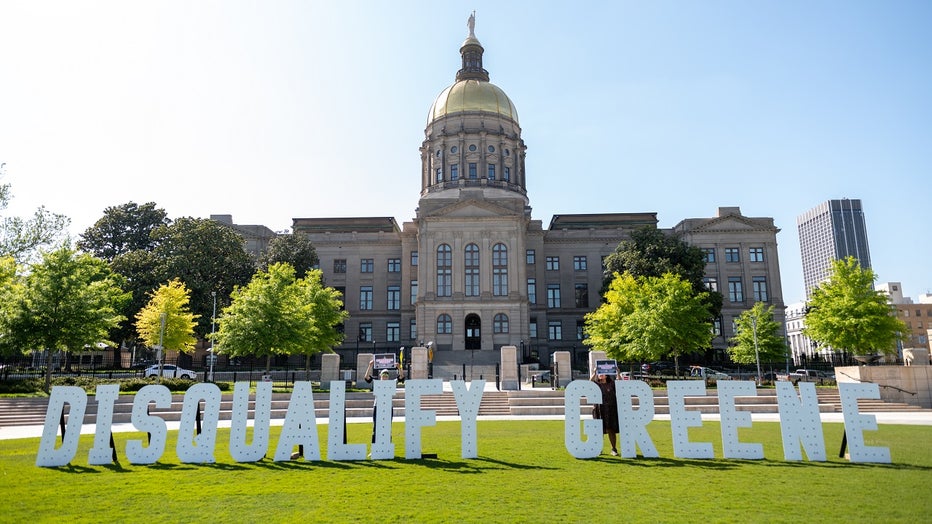 Georgians spell out "Disqualify Greene" in front of the Georgia State Capitol in support of the challenge to Marjorie Taylor Greene's qualification for the ballot under the insurrection Clause Of The 14th Amendment on April 21, 2022 in Atlanta, Georg

At the time of the riot, Greene was in a dark hallway at the Capitol urging people via social media to be safe and remain calm, he said.

"Rep. Greene was a victim of this attack," Bopp said, adding that she believed her life could be in danger.

Bopp said that Greene was engaging in protected political speech. He also argued that the administrative hearing process is meant to address basic qualification questions, not to evaluate major constitutional and federal claims.

The challenge to Greene’s eligibility to run for reelection was filed by five voters who live in her district, and the procedure for such a challenge is outlined in Georgia law.

The law says any voter who’s eligible to vote for a candidate can challenge that candidate’s qualifications by filing a written complaint. The secretary of state then has to request a hearing before an administrative law judge.

Beaudrot asked both sides to submit briefs by midnight Thursday, and said he would try to make a decision within a week after that.

Once he submits findings, Raffensperger will be tasked with deciding the eligibility Greene, a Trump loyalist, as he faces a tough primary challenge from a Trump-endorsed candidate. Raffensperger attracted Trump’s wrath shortly after the 2020 election when he refused to take steps to overturn Trump’s narrow loss in the state.

Rep. Marjorie Taylor Greene was called to the stand to testify in a hearing about whether she would be able to run for re-election to Congress.

The 14th Amendment says no one can serve in Congress "who, having previously taken an oath, as a member of Congress ... to support the Constitution of the United States, shall have engaged in insurrection or rebellion against the same." Ratified shortly after the Civil War, it aimed to keep representatives who had fought for the Confederacy from returning to Congress.

U.S. District Judge Amy Totenberg in Atlanta on Monday declined a request from Greene to halt the challenge process. Greene is appealing that ruling.

The Georgia complaint was filed on the voters’ behalf by Free Speech for People, a national election and campaign finance reform group.

The group filed similar challenges on behalf of voters in Arizona, where a judge on Friday ruled to keep three Republicans on the ballot, and in North Carolina against Republican U.S. Rep. Madison Cawthorn, who spoke at the rally that preceded the riot.

A federal judge last month blocked the challenge against Cawthorn, writing that laws approved by Congress in 1872 and 1898 mean the 14th Amendment section can’t apply to current House members.

The primary election is May 24.