May is Pediatric Brain Cancer Awareness Month and all this week, Q13 is shining the spotlight on three local kids who have battled this devastating disease in the hope that their stories spark more awareness, understanding and action. 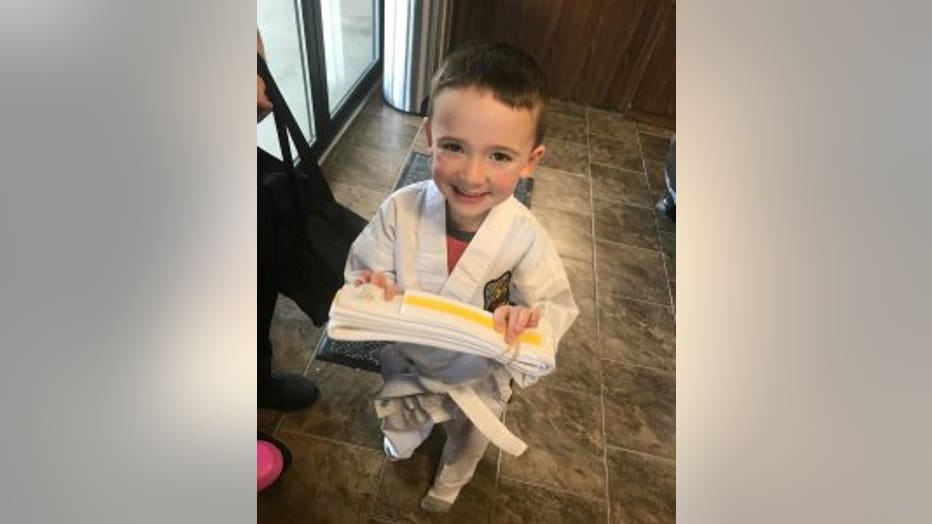 Lucas Bride is 5-years-old.  He loves playing outside and karate.  Lucas is also into sports and spending time with his parents, Christine and Travis Bride and little sister Vivian. 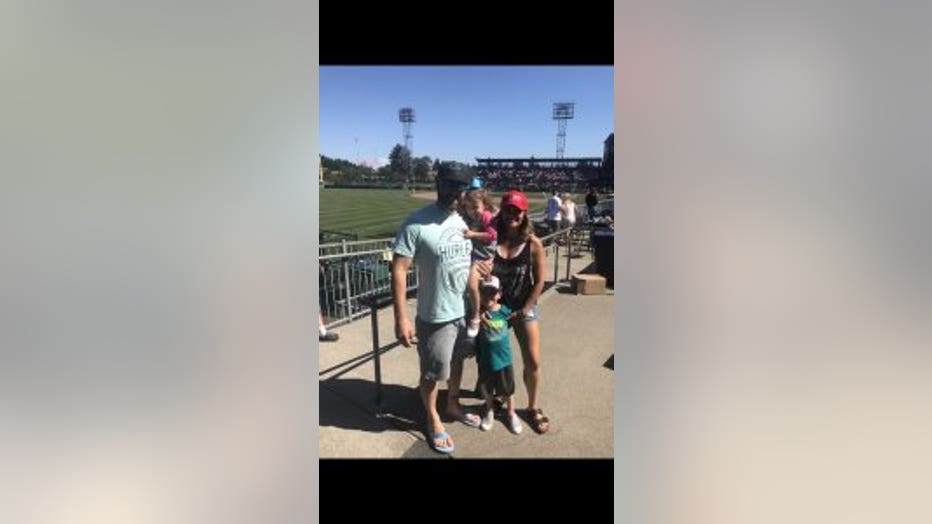 Last summer, Lucas was a healthy, growing boy, who rarely got anything more than the common cold, according to his mom.  But in late July Lucas started complaining of headaches.  His vision began to blur and his parents noticed he was having trouble keeping his balance in karate class.  After two visits to the pediatrician and one trip to the eye doctor, the Bride family still had no answers as to what was going on with Lucas.  It wasn't until Lucas started vomiting and  losing other normal functions, that his parents rushed him to the emergency room.  A CT scan revealed a cancerous mass in Lucas' brain called a medulloblastoma.  Sixteen hours after the Brides went to the hospital, Lucas was in surgery to remove an aggressive tumor from his brain. 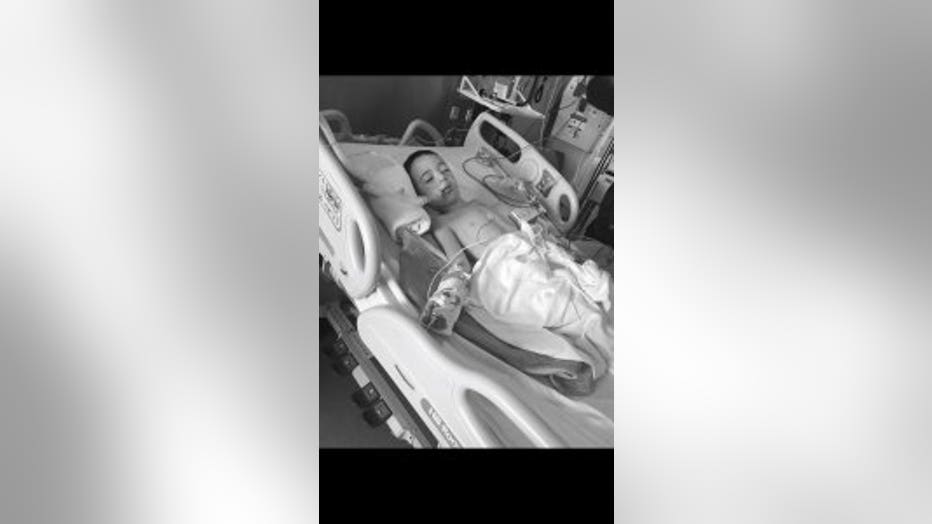 It's stories like Lucas' that scare parents.  How can a seemingly healthy child like Lucas all of a sudden be so sick?  While we don't have an answer to that question,  what we do know is there is a critical need for more awareness around pediatric brain and spinal cancers.

Dr. Vitanza says not only are these tumors aggressive, they're also in an incredibly high real estate area of the body, the brain.  As a result, these types of tumors can cause initial dysfunction and the treatments that follow can cause continued dysfunction, meaning kids who undergo therapy tend to need a lot of support to get cured and often need support for the rest of their lives. 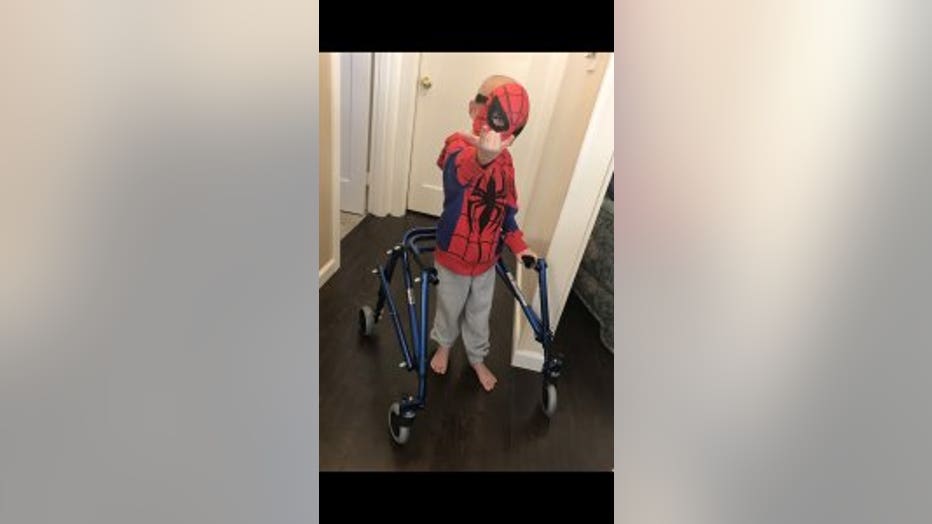 Although doctors were able to resect all of the tumor in Lucas' case, he still struggles to walk and is in physical therapy two to three times a week.  Lucas underwent 30 rounds of radiation and is now on a feeding tube to assure he continues to get the nutrients required to help him grow.  Needless to say, Lucas is not yet able to get back to all the normal activities he enjoyed pre-cancer.

Lucas is expected to finish his treatment this Fall.  His family hopes sharing his journey can help raise awareness around pediatric brain cancers.  If you'd like to follow Lucas', his family updates his progress on social media. 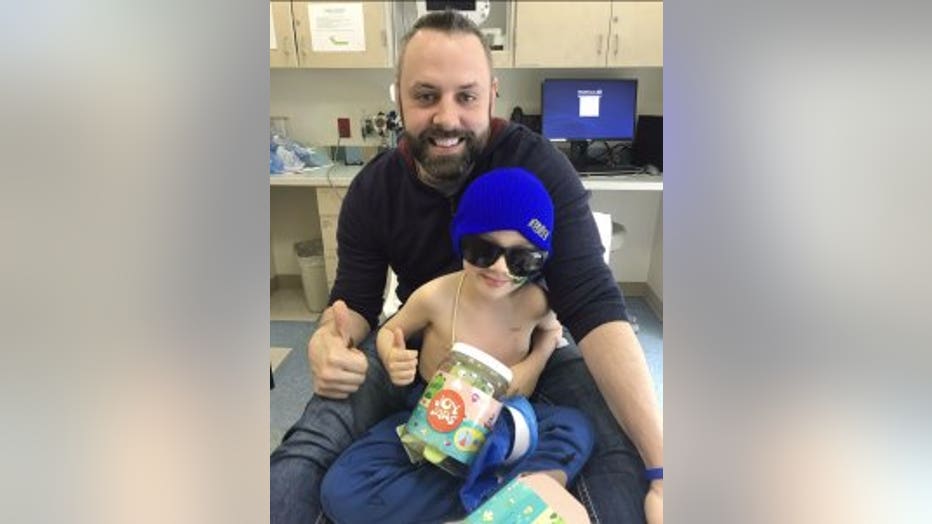 This Fall, the Bride family and Team Lucas Strong will participate in the Run of Hope in Seattle, to raise money for pediatric brain tumor research.

Q13's Marni Hughes sat down with Dr. Nick Vitanza from Seattle Children's Hospital to talk about medulloblastoma and other forms of pediatric brain tumors.  Below is part of that interview.  Dr. Vitanza's answers to questions about research, treatment, funding and awareness.

A:Unfortunately 4000 kids and young adults are diagnosed with brain and spinal cord tumors each year and even though 75 percent of them are long term survivors that other 25 percent that we lost each year really need new therapies and a lot of the most aggressive tumors that we treat have good therapies up front but for the children where the tumor comes back we don't.  Our focus is really trying to help those kids and a big push at Seattle Children's Hospital has been working on immunotherapy.  Our immune system in your body, a lot of people make the assumption it should be fighting bacteria and infections and it does, but one of it's jobs should be to stamp out cells that could become cancer.  So once you've had cancer form that means that that system has failed. Although immunotherapy is a really broad category of different therapies that either activate the immune system or deliver immune cells to try to get them to fight cancer and that's been one of my focuses and one of the focuses at Seattle Children's.

Q: What do you want people to know about awareness and ways to get involved?

A:For Brain Tumor Awareness Month I think it's critical people both get involved in donating to patient care, finding resources that can help children who are affected and really investigate the resources that they're donating to.  Different groups you donate to might have huge overheads and only a small part actually goes to children and then others will be the inverse where the overhead is covered and all of the money you're donating actually gets to children and gets to researchers.  Right now the national institutes for health the NIH of their cancer fund, only 4 percent of those dollars go to children even though there's much fewer children diagnosed than adults.  So even though we don't have the number of patients, the effect on society, the effect on families is enormous.   Unfortunately the government and public agencies haven't backed this as much as I think (they) should and I think it's a public health crisis.

Q: Where is the greatest need?

A: I think really young children with brain tumors.  A lot of our infants go through really aggressive chemotherapy where they're in the hospital for the majority of the time for months, sometimes can need radiation afterward that can affect them for the rest of their lives with neuro-cognitive problems, behavioral problems, emotional issues and even secondary cancers that they can get from their first treatment.  So not only do we need new therapies for those children if their disease comes back, but ultimately we need better therapies to give those children in the beginning that aren't as toxic that when they're cured of their disease they can live fuller lives.

Q: Talk about support for families in the Pacific Northwest who are facing a diagnosis of cancer in a child.

A: I think we're lucky in Seattle that we have so many groups that help patients from Strong Against Cancer, to immunotherapy research at Fred Hutch and Seattle Children's Research Institute doing basic science work.  I think on the science end we have a lot of coverage and a lot of people working hard.

Q: Is the prognosis better now for kids who are diagnosed than it was a decade ago?

A: Over the last 5 to 10 years we've really had a revolution in pediatric neuro-oncology and really know so much more.  Some tumors like medulloblastoma which is a very aggressive tumor in the back of the brain we used to think was just one disease and through genetic characterization we now appreciate it's 4 distinct disease potentially more... so we're developing treatments for each one of those groups.  I really think we live in an era now where a child can be diagnosed and then if their tumor comes back in a year or two there may be new therapies that could be curative for them that didn't exist when they found out they had a tumor.

Q: Tell us about the 2/3 clinical trial happening at Seattle Children's to help doctors in the operating room.

A: One of the breakthroughs we've had through work that was done at Fred Hutch and a trial that's now open at Seattle Children's Hospital is something called tumor paint which is now a phase 2/3 study.  What tumor paint is is it's an intravenous medicine you can give and it gets to where the pediatric brain tumor is and actually fluoresces it so the neurosurgeon when they're in the operating room can hopefully make better distinction on normal brain and what is tumor so they can do a better resection.  We know the best prognostic factor for almost all tumors we take care of is how much of the tumor the surgeons get out.  So hopefully this is one day just a tool that's standard for neurosurgery.

Q: Are there symptoms parents or caregivers should look for that could indicate a problem?

A: Anyone who has a neurological concern with their child should be going to their pediatrician and making sure they're having answers that are satisfactory about what is going on.  Unfortunately  a lot of things that can be neurological symptoms can also be symptoms of other diseases.   It's not uncommon that our children have headaches.  Headaches are really common in children especially with dehydration and increased screen time and a lot of things we're dealing with as a culture, but another thing that can be associated is you're having headaches and increased vomiting.  Vomiting that started a few times a week and is starting to escalate, that can be a sign that there might be increased pressure on the brain.   I think families shouldn't tolerate a loss of  function in their children so I'm surprised by the number of families who have a child that has constipation and who also won't be moving their legs as much and they think that they're just feeling weak and that turns out that there might be a spinal cord tumor or something else.  The state that your child is in neurologically if you feel at any point they're starting to lose skills or move backwards whether it's strength or their different abilities.  I think that's always a reason to talk to your pediatrician.

Q: What is the long term health impact on kids who have undergone treatment?

A: Unfortunately the treatments we have now do cause a lot of immediate side effects and a lot of late term side effects which is why some of our treatments like immunotherapy are so exciting not only to cure more children but hopefully ultimately to avoid a lot of those long term side effects.  The most common late effects... if you're getting radiation you can have neuro-cognitive effects, where maybe it takes a little longer to process information, maybe your speech is a little bit slower but the chemotherapy that we give can have a range of things from infertility to secondary cancers later in life, besides the immediate effects of hair loss and nausea and vomiting, and going through all this can also have a social component for children where they feel quite healthy afterwards but the years they miss for treatment, formative years, that can be hard to overcome missing out.